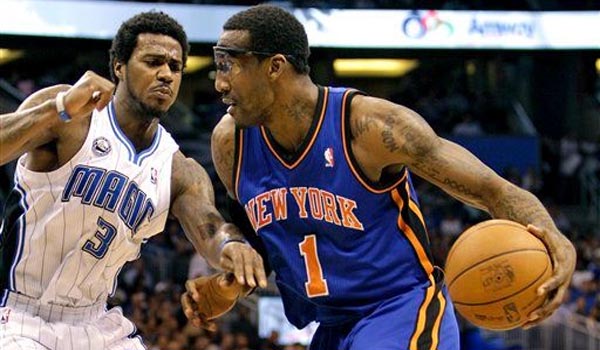 No one took any pictures of a guy shooting a freethrow, but this play looks like it could’ve resulted in an NBA foul.  There’s almost some contact there, and it’s an All-Star vs some guy your average fan probably doesn’t even recognize (Earl Clark).  I recommended this game in my weekly games to watch post, and I stated that if Orlando didn’t force the ball into the paint all night long, then I would do something drastic.  Fortunately I don’t have to do that because the Magic layed off with the threes and fed the ball to Dwight.  Superman Jr got 15 shots and 17 freethrows… 17 of 50 that his squad attempted.  Knicks fans: don’t go all crazy on the refs, you guys were given 47 of your own.  I predicted that a league record for threes attempted would be set in this game.  That didn’t happen (NY did their part by launching 30, but Orlando only took 18), but the new season-high for freethrow attempts in a game was set at 97.  That’s nine more than the next closest contest.  Oh yeah, there were also five technical fouls and one ejection.  Busy night for the officials.

Quote of the Day: Manu Ginobili talks about how his Spurs match up with the Memphis Grizzlies…

“They are young and very physical and athletic, and we are not precisely that. We have to do better with our brains.”

Photo of the Day: Is this Jon Brockman or a prime Vince Carter in a Jon Brockman costume?  I mean damn, this looks impressive…