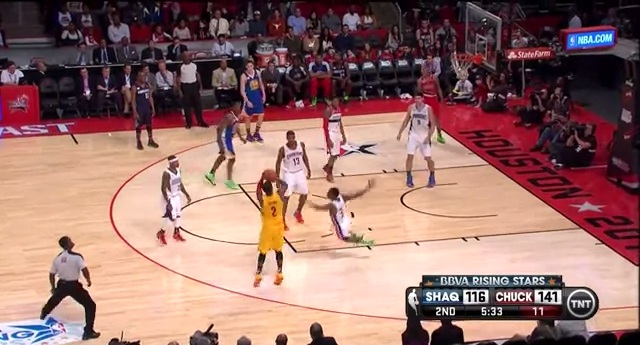 The BBVA Rising Stars Challenge, formerly and informally known as the Rookie/Sophomore game, is generally a rather uninspiring event.  Only twice in the past 11 years has the challenge been decided by fewer than 10 points, and it’s pretty much become tradition that the game concludes with an impromptu dunk contest.  Basically, it’s like the actual All-Star game… except with players that aren’t quite as good trying even less hard.  I always watch it, but it’s probably the number one NBA event I wouldn’t mind missing if ever I were to have something better to do.

The 2013 edition was anything but an exception to the rule.  Featuring an eye-popping final score of 163-135, its 198 total points set a new event record (keep in mind that these games last just 40 minutes).  The only participant who actually displayed consistent effort was Kenneth Faried, who earned MVP honors for his 40 points and 10 rebounds.  Such exhibitions are typically dominated by perimeter players, but Faried’s outstanding numbers are unsurprising considering that he doesn’t know how not to work his ass off.

As the young Manimal dunked his way to top honors, a familiar face dazzled in defeat.  Kyrie Irving, 2012′s Rookie of the Year and Rising Stars MVP, scored 32 points for the losing squad, but dominated his one-on-one battle with fellow 2011 draftee Brandon Knight, which broke out with approximately six minutes to go in the second half.

I’ll say this for the Rookie/Soph game: as boring as it mostly is, it always tends to deliver a moment to remember.  Most notably, in 2000, there was the Jason Williams elbow pass… but also think Greg Monroe trolling and Jason Richardson AND1 Mixtape-ing.

Though Kenneth Faried was deemed the man of the hour (and deservedly so), Kyrie Irving’s streetball explosion will be the sole reason the 2013 Rising Stars Challenge ever gets mentioned in the future.  Way to be, Kyrie!