A lot can change in nine seconds. For instance, take what appeared to be turning into the most memorable game of Dion Waiters’ NBA career.  Against the West-leading Spurs, Waiters had scored a team-leading 20 points, including the go-ahead jump shot over the best perimeter defender in the building.  To score a game-winner in the NBA is something every basketball player has dreamt about, but Dion’s dream would quickly turn into a nightmare due to a critical defensive error on his part.  As Kawhi Leonard receives the ball and squares up for the decisive three-pointer, note the lack of attention paid by Waiters. 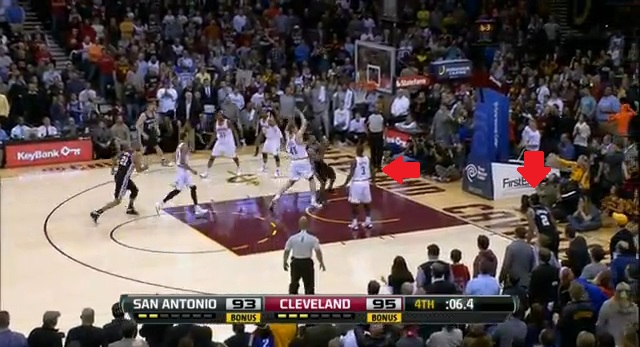 So yeah, Dion, it’s probably a good idea to keep an eye on your man in situations such as this, especially when your man is a 39% three-point shooter.  If not, at least be ready to make a play on Tony Parker’s pass.  This is no time to enter some sort of trance.

Though the Cavs fell just one brain fart short of beating the Spurs, Kyrie Irving had one of his worst NBA games to date.  He went 2-15 from the floor, scored just six points to Tony Parker’s game-high 24, missed all of his shots in the second half, and tripped twice during his own attempt to win the game.

Over 19,000 people attended the Rudy Gay/Carmelo Anthony brickfest in New York City.  In one of the least exciting four-point games you’ll ever see,  Rudy and Melo combined to make just 9 of their 45 shot attempts (that’s 20%).  It was a particularly ugly affair for the Knicks, who shot 35% and missed three consecutive layups with about a minute to go in a four-point game.  As the Knicks went basket-less between the 2:59 and :19 marks of the fourth, John Lucas III buried the dagger.  Actually, the Raptors may have won without that shot — it’s not like the Knicks were going to score — but I bring it up because Lucas, who scored 12 points on 4-5, is suddenly averaging 10 PPG on 50% for the month of February.  He’s now come up huge in consecutive fourth quarters and has scored in double figures three straight times.

Landry Fields scored just four points in his return to New York, but he did get engaged to a super model, proving that it’s good to be an NBA player — even one who averages five points a game on 11% from beyond the three-point line.

It’s fashion week in New York City. The Knicks have lost twice, and their biggest divas are struggling mightily.  Amare Stoudemire: nine points, six rebounds on 36%.  Tyson Chandler: eight points, 10 rebounds.  In all seriousness, I refuse to believe that this is a coincidence.  According to the NY Daily News and the New York Times, Tyson Chandler has been busy attending diet detox parties as well as various runway shows.

The Clippers scored 46 points in the first quarter of their 106-96 victory over the Rockets.  Ladies and gentlemen, I give you DeAndre Jordan:

That was only DJ’s best right-handed alley-oop hammer smash.  He had others.

As well as the Clippers’ starters played (especially Chauncey Billups, who had 19 points in 20 minutes), their bench was atrocious (12 turnovers, 39%).  Chris Paul and Blake Griffin were both forced to check back in during the fourth quarter as the Rockets closed from down 20+ to within 12.  Ryan Hollins couldn’t guard Donatas Motiejunas, who was a bright spot for Houston; his 12-point explosion in that fourth quarter was basically the reason why Del Negro had to go back to his starters.  James Anderson also played pretty well for the Rockets; he had 14 on 4-7.

In Indiana, Charlotte’s win streak ended at one game.  Paul George met little resistance in anything he tried to do, resulting in his first career triple-double (23/12/12).  The Bobcats shot 31.7%, gave up 50 points in the paint, and the Pacers won by 24.

Vince Carter MJ-shrugged past Larry Bird into the 29th spot on the all-time scoring list (SWAG!) as the Mavs creamed the Kings 123-100.  That shot, which gave Carter his 21,794th career point, was his third three-pointer in a row (he went back-to-back-to-back over a span of 1:05) and his sixth of the game.  VC led the Mavs with 26 points, his most in any non-overtime game of the past two seasons.

Alec Burks may have saved Utah from blowing a 13-point lead in less than three minutes.  In Minnesota, Ricky Rubio (18/9/10) led the Wolves on a late 9-0 charge that brought them to within four points of the Jazz.  Rubio didn’t score during the run, but he assisted on three consecutive scores, making him the clear catalyst.  After jumping in a passing lane to steal the ball from Earl Watson, Rubio had a great opportunity to cut it to a one-possession game… but he wasn’t able to do so because the aforementioned Burks chased him down and blocked the layup.  Rubio should’ve gone reverse, obviously, but credit Burks for the hustle.  He’s spent more time on the bench than he’s deserved to over his first couple seasons in the league, but he’s getting an opportunity to play right now and he’s certainly capitalizing.  Burks had nine points, seven rebounds, and six assists in this one, and he’s averaging 10 PPG in February.

Doc Rivers on Boston’s 71-69 victory over Chicago: “A college game broke out in the middle of a pro game.”  Refer to the box score for the ugly details.

The Nets parlayed their come-from-behind victory at Indiana into a two-game win streak with a 119-108 victory over the Nuggets, who’ve suddenly dropped three in a row.  Though not fully healthy, Denver has to be disappointed that they’ve completely wasted what has arguably been the greatest three-game stretch of Ty Lawson’s NBA career (at the offensive end, at least).  Coming off of a pair of 29-point efforts, Lawson scorched the Nets for 26 (and nine assists) on 8-11.  However…

…Lawson’s counterpart, CJ Watson, nearly matched him with 25 points on 8-12.  Lawson and Watson were just two of nine players to score double figures in the game, which featured 227 total points.  Joe Johnson led all scorers with 26, but no one reached 14 as spectacularly as JaVale McGee, who may have completed the longest alley-oop dunk in NBA history:

Seventy-five feet is an exaggerated estimate, but still.  Andre Miller let it fly from near the opposite three-point line, which would make it a 65-foot toss.  That’s nuts.

Who wants to get humiliated by LeBron James and the Heat? Not the 76ers!  Against eighth-place Milwaukee, ninth-place Philly picked up a huge 94-92 loss.  In doing so, they passed the crucial head-to-head tie-breaker off to the Bucks.  Credit Royal Ivey, who stepped up and swallowed his pride for the good of the team.  Overall, Ivey struggled — he recorded a +/- of 0 and prevented a Bucks basket by blocking a shot — but with under five seconds to go, he passed the ball directly to Prince Luc Richard Mbah-A-Moute, assuring defeat.  Without the tie-breaker it’ll be quite difficult for the Sixers to catch the Bucks, who’ve taken a comfortable lead of four games.  Huge play by Ivey, who wasn’t even credited with a turnover.  Unsung hero.

Box Score Observations: The Blazers scored a whopping 63 points and lost to the Hornets by 36 (remember, the Clippers scored 46 in one quarter).  The Portlanders shot just 32% in the Bayou, but did make all 13 of their free throws.  Josh Smith did 30/10/5 in a 108-76 blowout at the Magic Kingdom.  Kyle O’Quinn participated for a career-high 22 minutes.  Will Bynum and Jose Calderon combined for 44 points as the Pistons defeated the Wizards 96-85.  It should probably be noted that Greg Monroe had 16/18.

One Response to The Starting Lineup: Kawhi Leonard Steals The Show