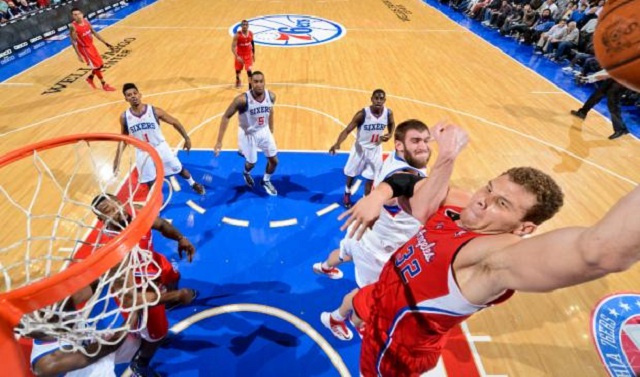 The Philadelphia 76ers got absolutely destroyed by the Los Angeles Clippers on Monday night.  At home, they trailed by double digits for the last 33 minutes, lost by 17, and fell into a massive 25-point hole as Blake Griffin and DeAndre Jordan dunked on them twice in one second.  Pictures are worth a thousand words, they say, and to understand the true magnitude of the humiliation you needn’t look further than the faces of the Sixers during the aforementioned Griffin-Jordan dunk sequence:

Evan Turner tries not to laugh:

And of course Spencer Hawes, who could only close his eyes and hope for the best (see the photo at the top of the post).  Honorable mentions to Courtney Lee and Josh Smith.

Throwback Poster of the Day: This is actually a short mix of one of the most under-appreciated “little guy” dunkers of all-time, Robert Pack, mashing on everybody, including Shawn Kemp twice.  The smooth sounds of Montell Jordan, which are of the period, really set it off…