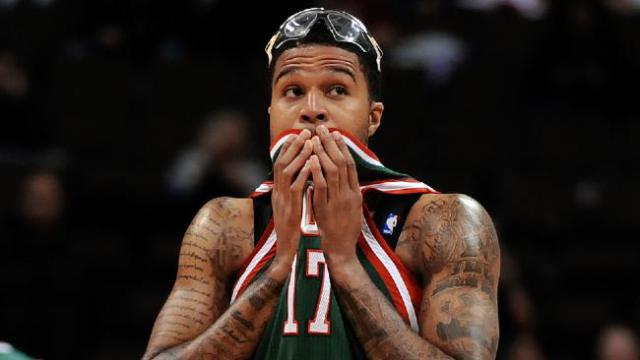 Nowadays, there is substantial money to be made by basketball players in destinations all around the globe.  From Europe to China, top talents are amassing small fortunes — multiple millions of dollars every year, in some cases — to put the ball in the hoop.  While this is somewhat uncommon, it’s actually possible for some players with NBA offers to earn a higher wage overseas.  A minimum contract in the Association is typically worth a little less than a million dollars, which is obviously a nice living, but a fringe guy like Sonny Weems or present-day Tracy McGrady can do better playing in Lithuania or China.  That’s why they’re there.  Most guys, however, are there because the NBA is not an option and the pay is astronomically higher than it is in the D-League.  The tradeoff, of course, is that one cannot be “called up” from Timbuktu.

In 2011, Detroit native and former Memphis Tigers star Chris Douglas-Roberts was one of those players for whom the NBA was not an immediate option.  His first (and to date, only) guaranteed NBA contract had just expired, and no suitors emerged to ink him to a new one.  By his own admission, Douglas-Roberts had brought the predicament upon himself.  He hadn’t always handled himself in the most professional of manners during his stints with the Nets and Bucks, and word of his questionable attitude was scaring everybody away.  So, Douglas-Roberts signed to play in Italy during the lockout.  As is the case with many international contracts, his deal was for one season only.  Following his season abroad he’d be forced to reassess his situation.  His options would be unchanged — accept another lucrative deal in a place like Italy, or come home and try to refurbish his image in hopes of catching on with an NBA club.  This time, he chose to take his chances stateside.

All summer, Douglas-Roberts remained unsigned.  Then, finally, with just one week to go until the start of training camps, the Lakers called — not with a guaranteed deal, but with an opportunity: they wanted CDR to join them for camp and earn his spot.  Though he was ultimately unable to secure that spot, he received the complimentary education of a lifetime.  From a Tumblr post authored by Douglas-Roberts himself:

The very first day I was 1 on 1 partners with Kobe. And we were going at it. Shit talking…elbows were thrown. To my surprise, after that first practice Kobe went to media and spoke highly of me. Everyday I played well and practiced well. Kobe continued to mentor me along the way. The Laker fans embraced me. I just knew I was in. Then I got a call from Leon (my agent) saying they were going to let me go. They told me I played great. The numbers on the business side just wouldn’t work. It was one of the worst phone calls I’ve ever gotten, but I was at peace because I knew I played my ass off. I brought it every day. My motto is “control what you can control” and I did that. That didn’t matter though. Once it got released that the Lakers let me go, the people thought it was due to my game. People had jokes. People wrote me off. It was embarrassing. However, I took positives away from my month with the Lakers too. I developed a relationship with Kobe Bryant. He showed me how to be a pro. He showed me real work ethic. Playing against him everyday made me so much of a better player. He understood me. He understood that its a difference in having a bad attitude and being competitive and wanting to win every drill/game. One night after a game and we were in the showers and he told me “you have no other choice. You were put here to be basketball player. You have to fight until you’re one of them boys. You’re too talented. I played behind mfers that I was better than up until my third year but I KNEW I would be who I am today then. I work too hard not to break through.” That stuck with me. So I appreciate the opportunity the Lakers gave me. I looked at that month with the Lakers as an internship under Bean. I gained knowledge that I couldn’t have gotten any other way. That’s what I took from that situation. It’s all about how you respond when times are rough.

More determined than ever before, Douglas-Roberts decided to join up with the Texas Legends of the NBDL.  CDR knew that the Legends, an affiliate of the Dallas Mavericks, offered him the most direct path back to the NBA.  Armed with a skillset superior to that of most minor league ballers, he scored 49 points in his very first game in the D-League.  About a month later, the Mavericks called him up to join them for a road game in San Antonio.  Chris Douglas-Roberts was officially back in the NBA.  His fresh start with the Mavs would be short-lived, however, as they waived him after just six appearances.

Now, you can follow Chris Douglas-Roberts as he continues to work towards his ultimate goal — to carve out his niche in the NBA — in a web series entitled “I’m Not A Star.”*  I’m Not A Star will document CDR’s workouts as well as other aspects of his life as a professional athlete.  It’s a window into the world of a fascinating young man, and I suggest that you check it out.  Here is the trailer…

2 Responses to Chris Douglas-Roberts Web Series: “I’m Not A Star”