A Detailed Look Into The Development Of Nick Young’s Swag 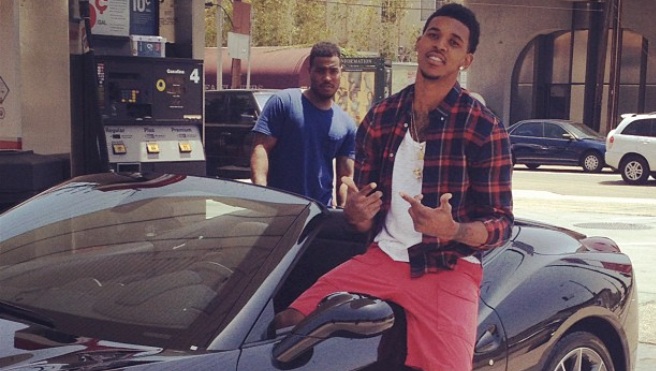 This morning, Michael Lee of the Washington Post authored one of the most entertaining articles of this NBA season.  The article, entitled Nick Young’s ‘swag’ going strong in Philadelphia, concisely chronicles the growth of Nick Young’s swagger from his time spent with the Washington Wizards, the team that drafted him in 2007, through his 18-point performance in Wednesday night’s Sixers victory over those same Wizards.  Lee, in telling this fascinating, unconventional tale of development, utilizes some variation of the word “swag” on 10 occasions, and provides us with unprecedented insight into the making of a legend.  Everything you’ve ever wanted to know about Nick “Swaggy P” Young’s extraordinary degree of swag, it’s all there in Lee’s piece.

For instance, exactly where did Young’s impeccable swag come from?  Obviously, the ’80s baby was born in Los Angeles with a gift, but it was in Washington where he was educated in the art of swag by elder masters such as Gilbert Arenas and DeShawn Stevenson.

Young was educated in the intricacies of swagger by Gilbert Arenas — whose “swag was phenomenal” — and DeShawn Stevenson — who once described himself as “swaggy” — when he arrived in Washington in 2007.

Most would argue that Young was drafted into a poor environment for basketball development, but if ever there was a place to be schooled in swag, that place was Washington, DC in the year of 2007.  Back then, Young was known to many as “Bean Burrito,” but his transformation into “Swaggy P” was already in its advanced stages.  By the time he left Washington for a return to Los Angeles in 2012, Young had a new identity and the equivalent of a PHD in the field of swag.  Now, in Philadelphia, “Swaggy P” is blossoming.

Before he was traded to the Los Angeles Clippers in a three-team trade last March, Young gave himself the Twitter handle, “SwagyP,” and it has taken on a life of its own in his new home in Philadelphia.

While making his third consecutive start for the 76ers on Wednesday, Young was introduced as “SwagyP” to fans at Wells Fargo Center. After each of Young’s three three-pointers, the announced yelled, “SwagyP for three!” A few fans were even spotted walking around the concourse in T-shirts with his No. 1 and “Swaggy P” written on the back.

Presently, Young’s swagger is hovering at a level that few have ever achieved.  The star pupil has arguably even surpassed his teachers, as he has become almost synonymous with all things swag.  Boosted in credibility by the acceptance of OG Doug Collins, “Swaggy P” is a full-blown phenomenon.

Young scored 18 points in helping the 76ers defeat the Wizards, 92-84, in his first meeting against his former team, connecting on two three-pointers in the third quarter and glaring angrily at Washington’s bench after each one. He flexed and mean-mugged after his second three-pointer and Kevin Seraphin and Trevor Booker nearly fell over laughing in their seats from the bench.

Arguably the most impressive of all Young’s incredible gifts is his uncanny understanding of when and where to draw the line.  Those with even half as much swag as Young often walk a tightrope as their each and every move is critically scrutinized.  As is the case with all geniuses of any discipline, the swagger savant must maintain the proper balance that keeps his brilliance from crossing over into the realm of insanity.  Thus far, Young has proven himself prolific in resisting the influence of those less swaggerish than himself.

During his time in Washington, Young earned a reputation as a one-dimensional gunner but he also attracted attention with his unique hairstyles. He now sports something akin to a mohawk, something his teammate Royal Ivey compares to the video game character, Sonic the Hedgehog.

Young tried to grow out his hair to compete with teammate and all-star center Andrew Bynum, whose awkward afro has garnered headlines since his brittle knees have kept him sidelined all season. Eventually, Young had to relent.

“Aw, man. Ain’t no competing with that. Have you seen that? He got me,”
Young said. “I tried but he started doing some…I don’t know what he been doing. But that’s Andrew. That’s how he’s been all year.”

Still, some would insist than one has not truly mastered his craft until he’s attained the ability to pass it on.  In order to complete his metamorphosis, Young must teach others as Arenas and Stevenson taught him.  This final stage of Young’s development has begun in his newly-discovered role of father.

Some of Young’s newfound maturity can be attributed to his 10-month old son, Nick Jr., who he calls, “Little SwagyP.” Fatherhood, Young said, has forced him to appreciate the small gifts while not sweating the small stuff.

“I’m in the house. I ain’t doing too much. I just want to be there for his first word. First time walking, crawling. All that. Most definitely, I really do believe it humbled me a little bit.”

I fear that the world is not ready for “Little Swaggy P.”  Given his genetic disposition, Young Jr., under the guidance of his father, could be the LeBron James of swag.

It is worth noting that with all of this glory does come a certain degree of chaos.  Amidst all the commotion of being a young millionaire, a new parent, an NBA ball player, and such a generally-swaggerish individual, Young has taken steps to assure that he maintains a level head.  Last summer, Young developed a new motto to guide him through inevitable times of distress.  And, as any swag aficionado would, he had it tattooed on his arm.

Nick Young always hid his addiction to ink by sticking to the “business” tattoos that were hidden under his jersey and could only slightly be detected up close. But last summer, Young decided to add some visible artwork to his left forearm: the Yankees’ NY logo surrounded by a huge star and the words, “In Swag We Trust.”

In swag we trust.