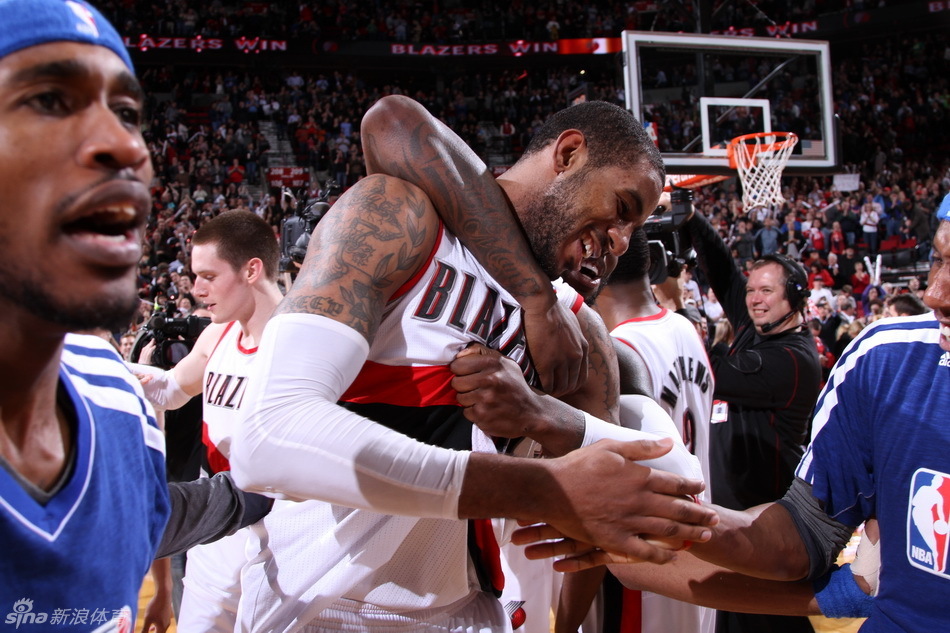 With the Blazers down three and fewer than 10 seconds to go, a broken play left the ball (and the game) in the hands of LaMarcus Aldridge.  Deliberately, the Dallas native stepped back into the deep right corner, looked down at his feet, and drained his first-three-pointer of the season.  Following an offensive foul (bullshit call, for the record) on OJ Mayo, Aldridge carved out position in his wheelhouse.  With a mere 1.5 seconds at his disposal, he collected an inbound pass from Wes Matthews and turned over his right shoulder.  As the ball left the All-Star’s fingertips, Nicolas Batum took off running towards the opposite end of the floor.  By the time the shot reached its apex the Frenchman had already extended his right index finger to the sky.  The release had clearly come on time, and the 18-footer looked pure the moment it left LMA’s hands.

As he did last April, LaMarcus beat his hometown team at the buzzer.  His 29-point, 13-rebound effort was huge in bringing the Blazers back from down 21 in the second half (yes, it was another one of those games).  Considering the Mavericks’ recent history in the Rose Garden (does the squandering of a 23-point fourth-quarter lead ring a bell?), the selection of narratives here is vast.  Mark Cuban doesn’t happen to like any of them, and I assume he’s already been on the horn with Stu Jackson to discuss the aforementioned offensive foul.

My personal favorite narrative? Fourteen of the last 17 games involving the Portland Trail Blazers have been decided by six points or less.  A lot of folks have been calling them lucky, but they’ve lost nearly as many as they’ve won (9-8).  Hell, the Mavericks got the luckiest shot of the night from Darren Collison, who turned a two-point game into a five-point game with a banker from 10 feet beyond the arc.  That was with just three minutes left, and when Brandan Wright tossed in a short hook shot and Nic Batum bricked a pair of free throws it appeared that the Mavericks would survive the Blazer surge.  They didn’t, obviously… mostly because they turned the ball over three straight times with under two minutes to go.  Dirk Nowitzki did hit a huge three just before Aldridge made his, but that was about the extent of Dallas’s clutchness on this night.

JJ Hickson always works his ass off, but he hustled extra hard tonight — his 26 points are a new season high, and his 15 rebounds match his best effort this month.  A free agent to be, Hickson must be seeing dollar signs every time a loose ball careens off the rim.  He pursues them like they’re gold nuggets and deposits them into the bank.

Dirk’s 26 are a new season high. Just thought that was worth mentioning, although it’s kind of depressing.  He was a shell of himself last year and he still dropped 40… twice.  I suppose there’s still time.

Missing three starters (Curry, Bogut, and Barnes), the Warriors picked up an easy 108-95 victory in Cleveland on the second night of a back-to-back.  Granted, it’s Cleveland, and Kyrie Irving is dealing with a case of the flu… but considering their super-shorthanded status I thought this was a pretty solid win for Golden State.  Klay Thompson, who basically represents the only disappointing aspect of Dubs basketball right now, was anything but a letdown in this game.  On his way to a game/season-high 32 points, Klay made 12 of his first 18 shots and each of his first six from downtown.  Thirty of his 32 came in the first three quarters and he never did shoot a single free throw.  As his shooting numbers reflect, Klay showed good discipline in his shot selection, refraining from heat checks until the very end of the third.  He kind of lost his touch after that (finished 13-24), but it didn’t really matter because the game was essentially in hand.  (Note: Golden State’s starting backcourt outscored Cleveland’s 58-32.)

As impressive as it was to watch Thompson drop 32 without any free throws, what stood out to me most was the Warriors’ defense — particularly that of three reserves: Festus Ezeli, Kent Bazemore, and Draymond Green.  In large part because of their efforts, the Warriors were able to hold the Cavs to just 44 points in the first half.  Ezeli was most impressive to me… he really anchored the effort with two blocked shots and a whole bunch of alterations.  Bazemore was also a standout performer for his ability to stay in front of Kyrie Irving, but I’m going to assume that the aforementioned flu bug was also partially responsible for Irving’s 5-17 outing.  Anyway, during the eight minutes and 17 seconds where Bazemore, Green, and Ezeli were on the floor together the Cavaliers scored just 12 points.  According to my math, that equates to a pace of approximately 69 points per 48 minutes.  Utilizing both zone and man-to-man strategies, the Warriors bench basically sent the Cavs back to the pre-shot-clock era for 1/5th of the game.

Tristan wasn’t the best Thompson on the floor, but he was the best Cavalier.  Tristan battled valiantly on the interior and earned himself an 18/11 double-double, his eighth this month.  Thompson is averaging 15 and 11 in January, which… wow, that’s really damn good.

Lawrence Frank should be nominated for Hater of the Year for his treatment of Andre Drummond, who continues to not play nearly as much as it seems that he should.  In a blowout loss to the Bucks, Drummond had the best statistical game of his young career, posting 18 points, 18 rebounds, 2 steals, and a block… in less than 28 minutes.  With 5:31 to go and the Pistons down a billion, Snow White’s least-favorite dwarf, Frank Grumpy, pulled Drummond for good (he only had three fouls, mind you).  Had Drummond been left in the game he’d have likely become the youngest player ever to record a 20/20 in the NBA (Dwight Howard).  He’d have also done it in fewer minutes than Howard, as well as Joe Smith and Shaquille O’Neal, the next two players on the list.  So, instead of watching Drummond pursue historical dunks and rebounds we watched Jonas Jerebko brick jump shots while the camera repeatedly panned to shots of Drummond on the bench with a towel on his head.  Fuck you, Lawrence Frank.

I’ve come to the official conclusion that Brandon Jennings is the NBA’s streakiest scorer.  In Milwaukee’s last game, the win over Golden State, Young Money dropped all six of his buckets in a span of five minutes.  Tonight, he racked up 20 of his 30 points in the third quarter.  If this dude could ever put together even half a game of his best basketball he’d drop 50.  Oh wait…

Munta Elli’ have it awl: Monta Ellis, haver of it all, went 5-14 against the lowly Pistons.  He has now taken 233 shots in the month of January.  In taking those 233 shots he has scored 235 points.  If Ellis has a bad shooting night against the Bulls tomorrow he may very well pull a Michael Beasley for January.  Despite having it all, he’s shooting just 39% on the month.

Samuel Dalembert: he had like 50 dunks in garbage time.  He also had a 12-point, 10-rebound double-double in 20 minutes.  This is why I called it Andre Drummond’s best statistical game.  I’m not saying he wasn’t good, because he was… but there was just a general lack of regard for such things as defense and boxing out for a good portion of this here game.  Both teams having 21 offensive rebounds and 50+ points in the paint pretty much says it all.

The Lakers won their third in a row, 111-106 over the visiting Hornets.  Once again, the big story is Kobe’s non-Kobe assists.  Having finished with 11, he now has a total of 39 in three games.  Needless to say, that’s like 39 more than he’s ever had during any other three-game stretch of his 17-year career.  The Lakers, inspired by Bean’s unselfishness, assisted on 34 of their 39 field goals on the evening, which is admittedly very impressive.  That said, this wasn’t a great win.  It was a good win, as any win is, but it was nothing amazing.  The Hornets kind of played like ass for most of the game and they still got to within, what, one point in the last couple minutes?  Some of the Lakers ol’ defensive issues were apparent despite the Hornets’ various stretches of inability to convert open shots — they matched the Lakers with 46 points in the paint, racked up 30 on the fast break, and Steve Nash… jesus, man, Steve Nash plays some awful fucking defense.

Some sketchy officiating definitely took place at a couple of different junctures.  Firstly, have you ever seen a referee rescind his own technical foul call?

The funniest part is that he didn’t even downgrade it to a delay of game.  He just took back the T and said, “my bad, Mr. Mamba!”  Whether it was accidental or not, a frustration dribble that sends the ball into the third row has to be something. Ironically, the Lakers were assessed a delay of game later on, which would’ve resulted in a Pelicans’ free throw had they been called for one earlier.  Also, maybe a travel?  No, okay then… but what about three seconds?

It seemed even more blatant on television than the screenshots make it out to be.  At the end of the day, however, I’m not THAT mad about the officiating, even if I’m a Pelicans fan.  New Orleans makes open shots, New Orleans wins this game.  The defense played by the Lakers was good and energetic on their standards (in all seriousness, they’re finally playing hard enough to win these games), but nothing that should’ve caused an NBA team to go 39-92 (42%).

Take another look at those screenshots of the three-second violation.  Notice that the world’s largest marshmallow is nowhere to be found.  After the game — the win, I should say — it whined (via ESPN):

“I’m a competitor, I’m a guy that thinks I bring a lot to the table, and not being on the floor is something that I don’t like, I don’t appreciate.”

“I think the finishing is more important (than starting),” Gasol said recently. “I think the best players should finish off games. That’s just the way it’s got to be. When the game is on the line, you want to be on the floor. That’s more important.”

That’s right, Pau, the best players should finish off games.  If you want to finish off games, maybe try being better than Earl Clark (20 points, 12 rebounds, immunity to three-second rule).

Highlight Recap, Dion Waiters Edition: I didn’t see much for highlights tonight, but this was a nice block…