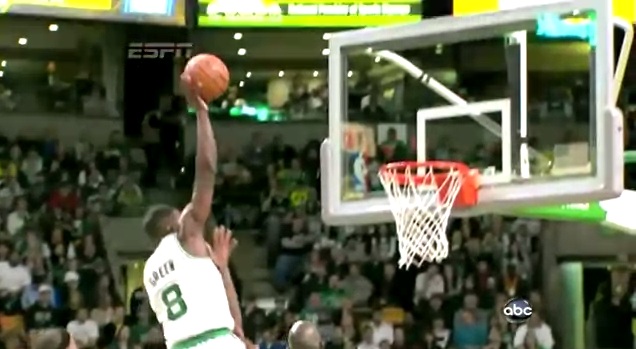 While this is no Tom Chambers on Mark Jackson, it is one of those spectacular jams where contact with the defender doesn’t interfere, but rather appears to suspend the dunker in midair.  Like Chambers, Green sets off for his smash by launching off his left foot and leading with his right knee.  Being that Bosh, who is begrudgingly forced to play the role of Jackson, stands six-foot-ten, Green’s knee plows into his body rather than into his chin.  Still, the aesthetics of the two plays are somewhat similar… and any time a dunker can do anything even remotely reminiscent of what Chambers did to Jackson it’s pretty damn cool.  Green even added a little flare with the Statue of Liberty extension, and if you pause the video at precisely the correct moment — right around the three-second mark — he’s posed almost exactly like the Air Jordan jumpman logo.  Complete with a rim-rattling spike, what a fantastic combination of style and substance this was!

With this nasty jam, Green retakes his sole position atop the poster list with four POTDs.  Chris Bosh, on the other hand, matches Serge Ibaka with his third appearance on the wrong side of the poster.  Clearly, rebounding isn’t the only department in which Bosh needs to improve — his hard fouls could definitely use some work.

Throwback Poster of the Day: This isn’t very old, but it’s another dunk where contact helped to create the Chambers/Jackson effect…