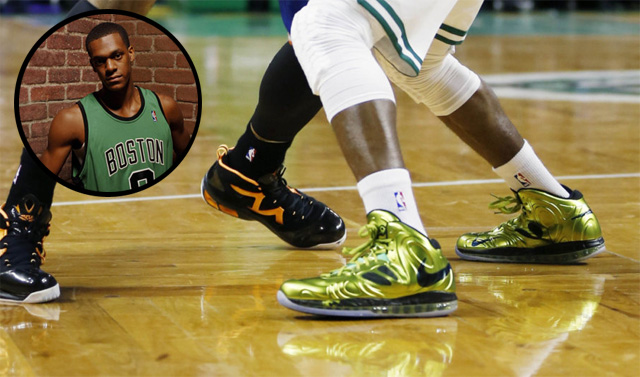 The struggling Celtics dropped their fifth straight (and first to the Knicks in Boston since ’06) on Thursday night, but Rajon Rondo was still able to shine in more ways than one.  As his teammates spent the majority of the game piling up bricks (or, in Paul Pierce’s case, dropping bricks on their toes), Rondo recorded his 27th career triple-double by scoring a team-high 23 points, grabbing 10 rebounds, and dishing 11 assists.  At 10-19 from the floor, he was the only Celtics’ starter to make half his shots.  Rondo was also responsible for Boston’s last eight points, thrice cutting the Knickerbocker advantage to one possession in the final four minutes.  It was an impressive bounce-back game for Rajon, who’d been on the wrong end of a Kyrie Irving 40-point game on Tuesday and shot just 4-16 on Sunday.  That said, the loudest aspect of his performance had little do with his actual play.

For the nationally-televised affair, Rondo laced up a unique pair of metallic gold Nikes that were awfully hard not to notice.  The sneaker is called the Hyperposite, and it retails in a variety of much more standard colorways for $225.  A pricey pair indeed, but one of the more popular ones that Nike has put out this basketball season.  I actually own this shoe myself, and it seems as though half the league is wearing it right now.  LaMarcus Aldridge was first to don the metallic look when he took the floor in a silver pair about a week ago.

Not surprisingly, reactions to these shiny kicks have been mixed amongst basketball fans and sneakerheads alike.  Personally, I thought they looked incredible on television — almost like Rondo was wearing actual gold on his feet — and I don’t think the photographs do them justice.  You can sort of get a feel for how ill they were on TV by observing the following gif from SBNation.

Yeah, I’ma have to give these here sneakers two thumbs up (two thumbs down for the cutoff tights, though; -.5).  I’d love to see them in person before passing final judgment, but I’m pretty sure I’d rock a pair in a heartbeat.  LaMarcus’ joints were kinda tinfoil, but Rajon’s were straight bling bling.  Pimp.gif.

Also, Rajon, as you are the presumable owner of many pairs of this fly-ass sneaker, may I suggest that you pick up this shirt to match?  For off the court purposes, I mean.