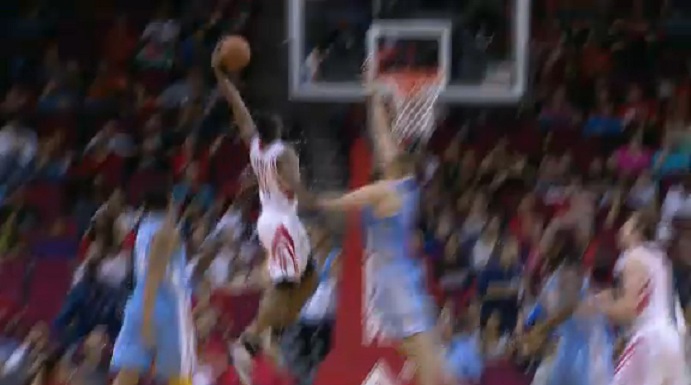 There are a lot of things I don’t understand about the following play.  Watch carefully and you’ll likely notice a few of them.  For instance, why did Andre Iguodala let James Harden blow right by him without even making a move?  Why were two Denver Nuggets looking and pointing at Patrick Patterson?  Why did the officials not call a foul on Kosta Koufos?  Why is there no video of it outside of the game highlights?  Why are these particular highlights from this Youtuber, whose videos I always use, such crappy quality?

I’m totally confused not only by this play, but by this entire game.  Normally, Youtube is spammed with like 100 different versions of every single half-decent play that takes place in each and every NBA game.  There’s almost nothing from this game.  Why?

Honorable mentions to DeMarcus Cousins and Jimmy Butler… neither of whom had dunks as good as Harden’s, but both of whom received a lot of HQ video love.

Was someone was out to prevent James Harden from tying Jeff Green with his third POTD of the season?  If so, he’s probably pretty pissed off at the Nuggets right now.  Next time, Denver, why not lay rose petals in the path to the rack?

Throwback Poster of the Day: Since we’re kind of on the subject of poor Nuggets defense, here’s David Robinson dunking on them 12 times in one game…