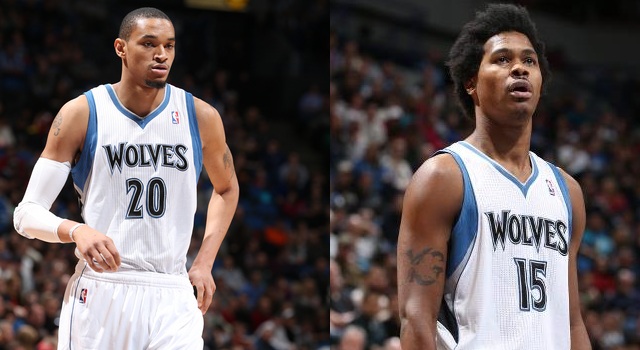 When I learned that Chris Johnson and Mickael Gelabale had been signed to 10-day contracts by the Minnesota Timberwolves on Saturday morning, I suspected that they’d likely see action that same evening against the Houston Rockets.  After all, each player was acquired purely out of necessity — with only seven healthy bodies available, the Wolves needed at least one additional player to field what the NBA considers a team.  So, using one injury exemption and another vacant roster spot recently opened up by the waiving of Lazar Hayward, the Wolves plucked Johnson out of the D-League and imported Gelabale from Spain.  Less than 24 hours later, each of them had been summoned into an NBA game… and been showered with MVP chants.  I kid you not.

Prior to being signed by the Wolves, Chris Johnson, a 6’11” center out of LSU, had spent 14 games playing for the Golden State Warriors’ Development League affiliate in Santa Cruz.  There, he’d been sharing time with other prospects but had still posted an impressive average of over two blocks per game.  In need of some height due to the expected absences of Nikola Pekovic and Dante Cunningham, the Wolves selected Johnson in part because he’d spent training camp with them last fall.  His most recent NBA appearance had been in April of 2012 as a member of the Hornets.

As for Mickael Gelabale, he hadn’t seen an NBA floor since 2008.  The 6’7” swingman was let go by the Seattle Sonics after tearing his ACL in practice, and he’s been working to make it back to the league ever since.  He represented France in the Olympics over the summer and made various stops during the fall and winter, eventually winding up with the Spanish team Valencia after his Croatian team was eliminated from Euroleage competition.  Altogether, he joined the Timberwolves with 109 games of NBA experience and over a decade of professional basketball under his belt.

Johnson and Gelabale made their first appearances for the Wolves early in the second quarter.  Johnson scratched quickly on an impressive alley-oop dunk from JJ Barea…

…but neither of the two would score another field goal in the first half.  To their credit, they had helped Minnesota take a surprising 44-38 lead, but that had more to do with the Rockets’ sluggishness and some solid play from veterans Andrei Kirilenko and Luke Ridnour.  Of all the lesser-known players who’d taken the floor, it was actually Chris Johnson’s counterpart, Greg Smith, who was turning heads; Houston’s backup center scored six points in the first half, all by virtue of the slam dunk.

As the Rockets continued to struggle in the third quarter, the Timberwolves extended their advantage.  It was a 10-point lead when Gelabale checked in at the three-minute mark and an 11-point lead when Johnson entered the game shortly thereafter.  Houston wasn’t done yet, though; they finished the period on a 10-2 run, cutting the lead to just four.  Suddenly involved in a battle against an explosive offensive contingent, the shorthanded Wolves would need someone to step up.  Lo and behold, the two guys who’d just joined the team around breakfast time took over the game.  And when I say they took over the game, I mean they legitimately took over the game.

Little did we know that the offensive rebound and ensuing five-foot jump hook scored by Chris Johnson to kick off the fourth and final quarter would be a sign of such incredible things to come.  Johnson had outfought multiple Rockets to secure that rebound, and he’d continue to be quickest player to the loose balls and just generally the game’s most active participant down the stretch.  Following a pair of free throws, Johnson out-sprinted everyone from baseline to baseline, hammered home a spectacular lob from Luke Ridnour…

…and proceeded to grab another couple rebounds.  By the time he took his next trip to the stripe, Johnson had scored six consecutive points.  As he drilled another couple of free throws to put the Wolves up nine, Johnson was lauded with a faint but discernible chant of M-V-P!.  As used and abused as the MVP chant has been at NBA basketball games, I couldn’t help but get a pretty big kick out of the fact that Chris Johnson was getting one in his first game with the Wolves, fresh out the D-League.  Even Jeremy Lin (who was ironically present) had required more than one game to achieve such overwhelming popularity at Madison Square Garden.

Immediately following Johnson’s first set of MVP free throws, Mickael Gelabale began to make his own presence felt.  Gelabale made his first significant contribution at the defensive end, where he pressured James Harden along the sideline.  Harden, looking to release a three-point shot, was stifled by the aggressive defense and eventually went on to commit an awkward-looking turnover.  About a minute later, Gelabale cut to the basket and finished on a pass from Ricky Rubio for his first field goal of the contest.  Working primarily off of the ball, Gelabale wisely decided to capitalize on Rubio’s play-making abilities.  Much to the delight of about 17,000 Timberwolves fans, he spent the next two and a half minutes outscoring the league’s fifth-leading scorer 10-2.  When Gelabale’s energy landed him at the free-throw line for a third consecutive possession, the crowd showered him with his own M-V-P! chant.

As Minnesota’s parade to the foul line pressed on, the chants steadily gained volume.  The most boisterous of all was for Johnson — and deservedly so — when his final pair of free throws put the Wolves up 84-75 at the 4:41 mark.  He’d scored 13 points in just 13 minutes, and one final slam dunk would bring him up to an even 15 on the night.  All in all, Chris Johnson and Mickael Gelabale had scored TWENTY-THREE consecutive fourth-quarter points for the Wolves.  The Rockets only scored 20 as a team.  In addition to his 15 points, Johnson racked up six boards and blocked a shot.  Gelabale added totals of 11 and 4, and the Wolves ultimately secured a 92-79 victory to snap a five-game losing streak.

The Rockets, on the other hand, have now dropped seven in a row.  Having shot just 32% from the floor whilst sending the Wolves to the free-throw line a whopping 36 times… they were absolutely dreadful.  Still, what Chris Johnson and Mickael Gelabale were able to do in their respective Wolves debuts was pretty freaking remarkable.  I can’t prove this, but I’m going to confidently assert that 23 points are the most ever scored consecutively by players on 10-day contracts.  And then there’s the fact that these 23 points came in the fourth quarter of what had been a four-point game.  That’s the part that makes this really crazy — none of it was done during garbage time!

As for the MVP chants, Johnson admitted that it was “probably just for tonight, I guess.”

While Chris Johnson may never win a league MVP, he just might parlay his 10-day contract into the payday of a lifetime.  Clearly, his athleticism is NBA-caliber.  He’ll need to continue to impress with his energy and display a solid understanding of the game in order to stick, and I haven’t seen enough of the guy to make a prediction as to whether or not he’s likely to do so.  That said, he’s off to a damn good start!  The same goes for Mickael Gelabale, who will look to make a lasting impression as a scrappy wing defender.

Regardless of whether or not Chris Johnson and Mickael Gelabale outlast their 10-day contracts, this was awesome.