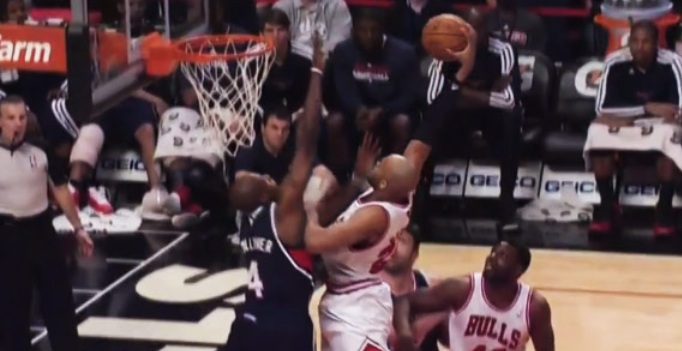 There’s a laundry list of things I like about the dunk that Kevin Durant sent home over the top of Marcin Gortat last night.  First of all, I like that Gortat is seven feet tall, 240 pounds.  That’s a big damn Pole to be smashing on with such authority.  In addition, I like that Durant took off from the dotted line, that he drew enough body contact to warrant a whistle, and that this dunk and the ensuing free throw accounted for his 39th, 40th, and 41st points of the game.  That’s what I’d call one hell of an exclamation point!

Taj Gibson’s dunk on Anthony Tolliver, though… there’s a soccer mom’s grocery list of reasons why I like that.

The way he goes straight up off of his vertical.  The pendulum-like motion of his hammer-bearing arm, and the way it drops with the force of mighty Thor.  The helplessness of Anthony Tolliver, who so often seems to become caught up in these disastrous situations.  The commentary of Stacey King, whose lamenting of Nate Robinson’s heat check so quickly turns to sheer jubilation.  And of course, that rim hang.  With only his sleeve-bearing arm, Taj swung like the king of the jungle.  We are not worthy, your swagness!

Throwback Poster of the Day: James Posey on Shelden Williams…