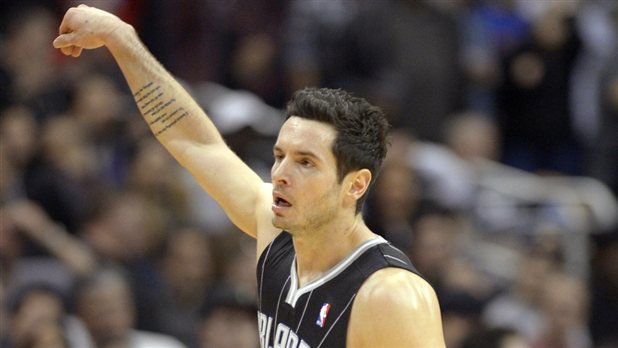 ***The Orlando Magic have proven once again that they are not to be slept on.  The Clippers, after getting off to a 16-5 start, took their collective foot off the gas, allowing the Magic to hang around.  The Magic went on to outscore the Clippers 29-18 in the fourth quarter, leading to a 104-101 victory.  Arron Afflalo, a Los Angeles native, dropped 8 of his 30 in that very fourth quarter, and none other than JJ Redick knocked down the go-ahead triple with 42 seconds to go.  Afflalo and Redick combined for 51 points on 7-11 from distance.  Meanwhile, Ish Smith, Josh McRoberts, and Andrew Nicholson got their J-Will/C-Webb/Vlade on…

Orlando’s victory snapped a 10-game losing streak.  Redick’s season scoring average has nearly eclipsed 15 points, which must make him one of the leaders amongst all bench players (where would I go to look this up?).

***David West had himself a weekend.  On Saturday, West recorded his first career triple-double (14/12/10) as the Paul George-less Pacers knocked off the Bobcats 96-88.  On Sunday, he went five for his first five in Brooklyn and finished the game with 27 points on 11-19.  The Pacers went on to lose, however, as the Nets outscored them 28-11 in the fourth quarter.  Deron Williams led the way with 22, inspiring a faint but audible “M-V-P” chant from the Barclays Center crowd.  One can only hope they were being sarcastic.  Gerald Green scored 15 on 5-13 in his first game against the Nets.

***The was a Michael Beasley sighting in Chicago.  As the Suns beat the Bulls by 16, Super Cool came off the bench to drop 20 points in 21 minutes.  He did so by making 10 of 14 attempts from the floor, which is highly unusual, as Beasley has attempted more shots (343) than he has scored points (329) this season.  Sadly, this is just the eighth time he’s shot 50% as a member of the Suns.  Only once has he done it twice in a row, so don’t expect this to be the start of a new trend.

***Amir Johnson and Ed Davis played more like Shaquille O’Neal and Hakeem Olajuwon on Sunday, recording combined totals of 42 points, 26 rebounds, and 6 assists.  Each of them finished with 20/10 lines, which is pretty weird considering that they’d only had seven such games between them in seven collective seasons (including this one) with the Toronto Raptors.  Despite the eye-popping numbers posted by Johnson and Davis, the Bucks bounced back from a terrible first quarter (outscored 34-18) and beat the Raptors 107-96.  John Henson helped the Bucks do so by holding his own against Davis.  Henson, a collegiate teammate of Davis at North Carolina, had 19 points and 6 boards.  Meanwhile, Larry Sanders — who spent the first three quarters of his afternoon getting dominated by Amir Johnson — took control of his individual match up in the fourth, outscoring Johnson 6-4 and making his presence felt on the defensive end with seven rebounds and a blocked shot.  Sanders also smashed home the alley-oop dagger which was so swaggerishly lofted up to him by Brandon Jennings…

***San Antonio’s bench scored 55 points in a 106-88 rout of the Timberwolves, who have now lost three in a row and five of their last seven.  To say that Minnesota suffered from some lackluster guard play would be an understatement; Alexey Shved and Ricky Rubio failed to make any of their 13 shot attempts while JJ Barea went 4-11 and Luke Ridnour got owned by Tony Parker.  Meanwhile, the Spurs got 15 points on 6-9 from Gary Neal.  Neal could really help the Spurs by sustaining such production over the next couple games, as Manu Ginobili will miss a week or two with a pulled hamstring.

***A couple of unusual finishes that nearly turned epic took place in Detroit and Portland.  On Saturday, the Pistons trailed the Jazz by 13 with just 3:26 to play.  They went on to lose by just three, 90-87.  Utah had built their advantage with a sudden 19-6 run, but as quickly as they’d surged ahead, Detroit came roaring back.  The catalyst in the unlikely turnaround was Will Bynum, who scored four straight layups over the course of a minute and 22 seconds. Following his individual 8-1 run, Bynum made a crucial play at the defensive end by diving to the floor twice in 10 seconds in order to secure a steal that led to a Brandon Knight layup…

Bynum’s incredible hustle would ultimately earn the Pistons a shot to tie with 4.1 seconds to go.  Their inbounds play failed to yield a clean look, though, and the Jazz hung on (I felt that Brandon Knight was fouled by DeMarre Carroll, but the officials did not).

***A similar situation unfolded in Portland on Sunday.  Down 10 to the Thunder with 3:30 to go, the Blazers closed to within one by virtue of a dramatic 9-0 run.  Portland, who turned OKC over twice on consecutive crunch-time possessions, actually had an opportunity to take the lead on a layup, but Nicolas Batum flipped up some left-handed bullshit that failed to even draw iron.  As you can see, he inexplicably failed to pass the ball to Wes Matthews, who was wide open for an even easier layup.  F@ck you, Batum.

***How bad are the Sacramento Kings?

That bad.  Props to Mario Chalmers on his career-high 34 points and franchise-record-tying 10 three-pointers, but he’d have encountered tougher defense in an over-40 pickup game.  In mean seriously, take another look at his second score of the game.  That’s just… I mean… wow.  It’s one thing to get blown out and stop trying; it’s another thing to never start trying in the first place.  What a joke the Kings are.

***Isaiah Thomas, the league’s clear frontrunner for garbage time MVP, matched Chalmers with 34 points of his own.  The Kings lose by an average of 11 points when Thomas scores 20 or more (not that it’s his fault… he just has a tendency to light it up when he’s inserted into games with forgone conclusions).