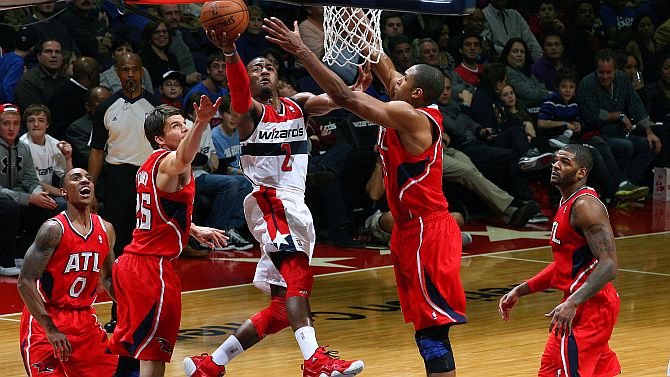 Wizards 93, Hawks 83 [Saturday]
***JOHN WALL BACK!  In something of a surprise return (a surprise to me, at least — I had no idea he was about to come back), Wall helped his Wizards achieve their first win streak (two games) of the season with a 21-minute, 14-point contribution (5-11, 4 AST/3 TO) off the bench.  It was a feel-good game for the Wizards in more ways than one, as Wall was not only present, but a factor.  During the three-minute stretch of the fourth quarter where the game was essentially won (the Wiz stretched their lead from 6 to 13), Johnny sliced, diced, and sauteed the Hawks’ defense, thrice driving to the basket for layup finishes.  Clearly, his blazing speed remains very much intact.  Let’s take a look at how he used it to score the last of his three consecutive layups… 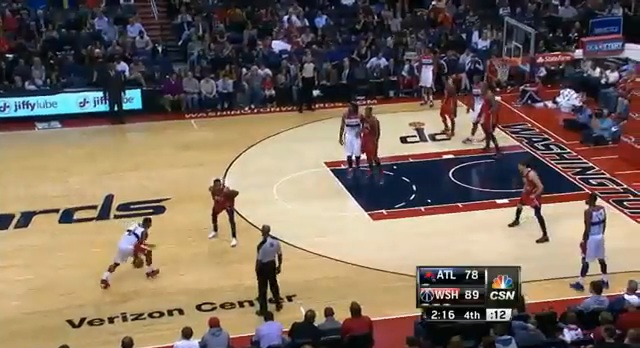 Note the distance between Wall and his defender, Jeff Teague, when Wall decides to explode towards the basket.  Also note that Wall didn’t make any type of deceptive move… he simply decided to go, and went.  Teague, having been burned twice in a row, was wisely electing to give himself more than one step’s worth of cushion. 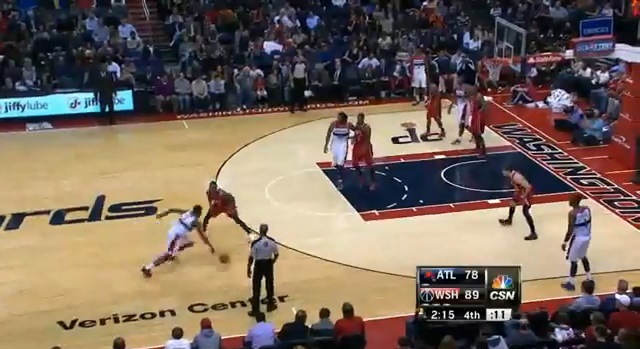 At this point, Wall’s explosive first step has taken place.  Being that Teague allowed so much cushion, he maintained an angle on Wall despite his inability to react as quickly as Wall had made his move.  Normally, Teague shuffles to his left and easily shuts off the offensive player’s preferred lane to the basket, which results in either a charge or a change of direction.  Wall is so fast, however, that Teague is unable to react quickly enough despite giving up two step’s worth of cushion… 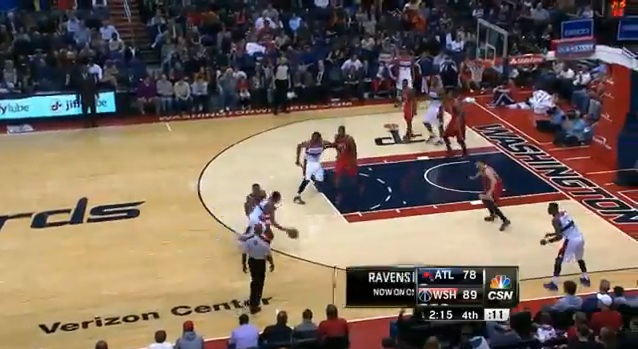 Upon completion of his second step — which was just as ridiculously fast as the first one — Wall has turned the corner.  Teague is now out of position and is left with no choice but to commit a foul.  He fails to do so, and Wall proceeds to blow by three help defenders with the greatest of ease, resulting in his third consecutive score. 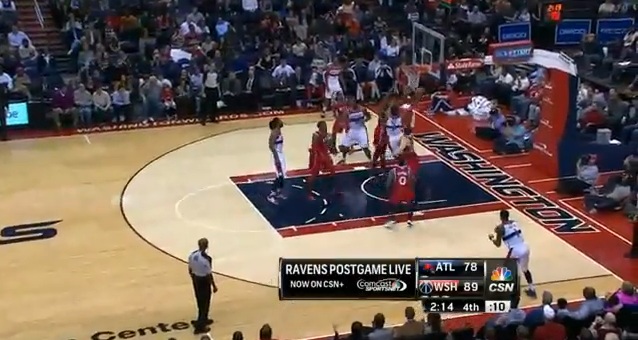 Now, could this play have been defended more effectively?  Sure it could’ve.  As fast as John Wall is, there are guys who can keep up with him having allowed two steps of leeway (Avery Bradley, for example).  Also, Kyle Korver had plenty of time to step in to take a charge, but defense is obviously not his forte.  Additionally, a better shot blocker than Al Horford might have caused Wall to miss at the rim (Larry Sanders or Serge Ibaka, perhaps).

As incredibly fast as he is, a simple burst to the basket from two steps beyond the three-point line will oft not be so effective as it was against Atlanta.  This is why it is so important that Wall becomes a better shooter.  He needs to be able to exploit the space that defenders are forced to give him.  If Wall could even turn himself into a respectable jump shooter it’d make him twice the player that he is today.  If he were to become a great shooter… it’d be game over.  You see how easily he roasted Jeff Teague, an impressive athlete who wasn’t even the slightest bit worried about a pull-up shot.  Imagine the threat Wall would pose to any defense if they knew there was a 40% chance that he’d make an open three-pointer.  Unfortunately, there is no real indication that Wall will ever become a shooter of that magnitude.  His percentages from 16-23 feet and three-point range both dropped off between his first and second seasons.  He attempted four jumpers against the Hawks, all from 16-23 feet, and missed them all.