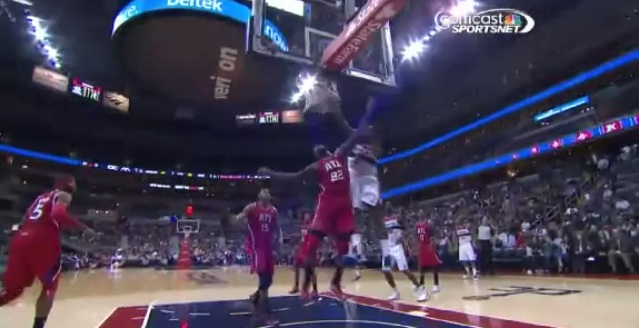 As terrible as the Wizards have been this year, it’s hard to imagine where they’d be without Martell Webster.  Webster, though only averaging about 10 points per game, has been one of Washington’s steadiest contributors.  On he court, his most important quality has been his ability and willingness to do a little bit of everything, but it’s arguable that his presence has been even more crucial in the locker room, where he has become the team’s leader by all accounts.  Throughout the Wizards’ struggles, Webster has helped his group maintain as positive a collective attitude as possible.  Despite their 6-28 record, you may have noticed that there haven’t been any reports of severe meltdowns out of the Nation’s Capital.  When you’re the Wizards, that’s something.  Also, Webster has scored 37 points over his last two games — both Wiz victories — and dunked on former DC icon DeShawn Stevenson in the process.  Skip to the 1:04 mark…

I think a little bit of Stevenson’s swag rubbed off on Webster when the two made contact in the air.  The video shows Martell flexing, but that wasn’t even the full extent of it.

Congratulations on your first win streak of the season, Wizards (or should I say Wallzards?).  Honorable mention to DeMarcus Cousins.

Throwback Poster of the Day: Grant Hill dunks on everybody.