Doubt Damian Lillard, But Do So At Your Own Risk 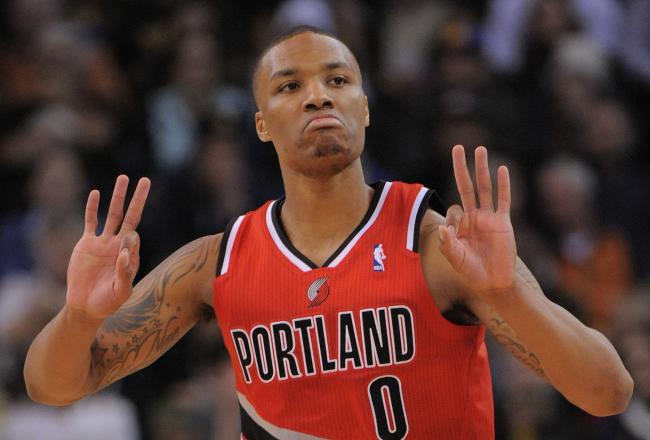 Sometime near the end of Friday night’s match up between the Blazers and the Warriors, NBA blogger Kevin Pelton tweeted the following:

“The Warriors are in for like a decade and a half of lamenting that Damian Lillard is from Oakland.”

A decade and a half may be a slight stretch, as Lillard will be 37 then, but Pelton’s point stands — again and again, Lillard continues to rise to the occasion.  Unfortunately for the Warriors, every one of their home games against the Portland Trail Blazers from now through the foreseeable future is going to be an occasion for one Damian Lillard.

Yesterday, young Dame haunted his hometown team in his first ever NBA return to Oakland, where physical one-on-one match ups against his big brother began to mold him into the fearless offensive force that he is today.  As a middle-schooler, Lillard used to obsess over becoming the cream of Oakland’s then-current crop.  When his seventh-grade self first sought out an online list of prospects, he didn’t discover his own name at the top.  This troubled the young man deeply, and so began his conquest to lay claim to his basketball territory.  Now, having become just one of three ’80s or ’90s babies to make the NBA out of Oakland — the others being Derrick Brown and Drew Gooden — I’d say Mr. Lillard probably doesn’t worry too much about his standing amongst hometown prospects anymore.

Indeed, young Dame has much bigger fish to fry in 2o13.  Maybe that’s why he was completely undaunted in his return to The Bay.  Playing in front of his family and friends, Lillard recorded a career-high 37 points on an efficient 15-25 from the floor and 7-12 from three.  The Blazers lost the game by six, 103-97, but that had less to do with Dame and more to do with his supporting cast shooting 29.8% from the floor on 60 attempts.

As has become typical of Lillard, he only got better as the game wore on.  The Blazers trailed by 20 with less than half the third quarter remaining, but Dame, refusing to go quietly, set off on a scoring rampage during which he made nine shots in a row.  His final bucket, a three-pointer with 22 seconds left, brought the Blazers to within three.  The Warriors weren’t about to choke the game away at the free-throw stripe, though.  Not with Steph Curry at their disposal.

The Warriors are damn fortunate that their roster features such a sure shot from the line.  Lillard was so incredibly hot he was actually making the heat checks that typically bring consecutive field goal streaks to their end.  Surely he had one last three-pointer in him.

Forget the fact that the Blazers lost.  They’ve beaten a variety of good team over their past few games and were battling through the second night of a back-to-back that began with the Miami Heat.  Not even the ’96 Bulls won ‘em all.

What’s really of note here is Lillard’s poise.  Once again, he rose to the occasion rather than shrinking in the moment.  This is a cold-blooded kid, and while I realize that he’s a little older (22) than most of the kids these days, he’s already playing at a level where he only needs but a little refinement to become an All-Star caliber player.  There are only six guards in the West — Harden, Parker, Curry, Bryant, Westbrook, and Paul — who have been playing on a higher level offensively than Lillard.  If Dame can simply improve his three-point shooting about 4%, cut his turnovers down a smidgeon, and better his understanding of team defense, then he’s right there.  While I realize that he’s two years older than Kyrie Irving, I’m not about to claim that a 22-year-old is beyond such simple improvement.

In the era of the ones, is Damian Lillard going to become a top-five point guard?  To be honest, I wouldn’t put my money on it.  The field — Chris Paul, Tony Parker, Russell Westbrook, Kyrie Irving, Derrick Rose, Rajon Rondo, Deron Williams — is just so incredibly strong… it seems hard to imagine anyone breaking through.  However, whether Lillard ever becomes a peer to those players or not, I think he may already be closer than some care to admit.  And now, having come to understand what drives him, we know full well he’s gunning not only for a spot, but the number one spot.  It’s simply how he operates, and it’s that mindset that’s gotten him to where he is today.  Perpetually, there will be one man who refuses to doubt Damian Lillard. That man is Damian Lillard, and this lack of doubt alone has proven to make him a threat.

There is a popular argument to be made that Portland is a flash in the pan, and that Lillard and his Blazers have benefited from their schedule, which has been the eighth-easiest amongst all teams.  If I’m not mistaken, Terry Stotts’ starters play more minutes than any unit in the league (Lillard himself is actually seventh overall in individual minutes).  The Blazers’ bench is indeed horrible, but it’s hard not to be impressed by what the team has accomplished lately — a victory in New York, another in Memphis, and a comeback win over the Heat.  Will the pressure of such lackluster depth eventually take its toll on the Blazers as their schedule corrects itself?  Will Lillard run into the dreaded rookie wall?  Truthfully, only time will tell… but I will say this: despite what the relevant factoids suggest, my eyeballs are telling me I’d be a goddamned fool to doubt Damian Lillard, and by association, the Portland Trail Blazers.

As I said, when it comes to becoming a top-five point guard, I don’t think I’d put my money on Damian Lillard.  Never have I been a gambling man, and I’m not about to take that sort of risk.  However, being the firm believer in the power of mental fortitude that I am, I’m not about to put my money against the man who once became so dedicated to becoming the best middle-school basketball player in his city that he wound up a star in the National freaking Basketball Association.  Clearly, this kid was cut from a different cloth.

When it comes to Damian Lillard, I think I’ll simply keep my money in my pocket, sit back, and enjoy the show.  I suggest that you do the same.