The Starting Lineup: Brandon Jennings Turns His Swag On 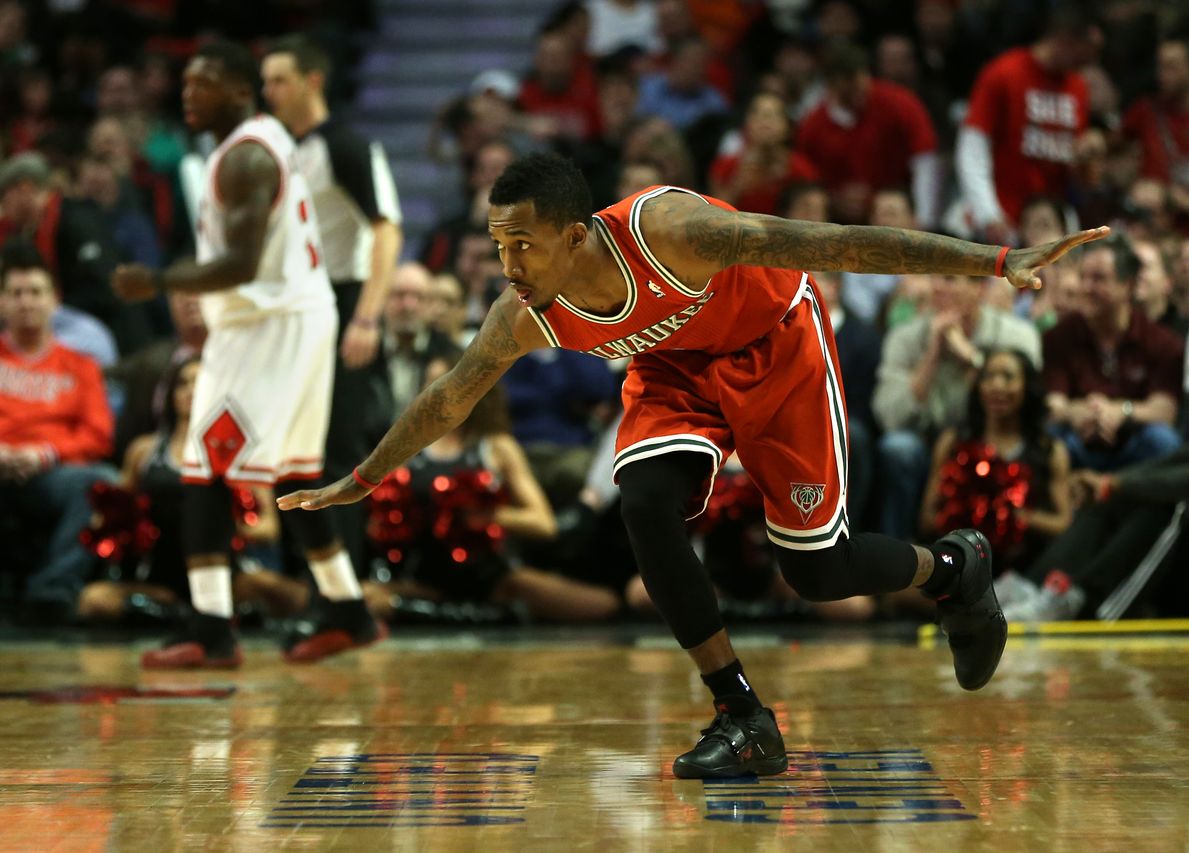 Brandon Jennings got all sorts of swaggy on the Bulls as the Bucks pulled out their second straight victory under Jim Boylan, who is currently neck and neck with Bernie Bickerstaff in the running for Coach of the Year.  Jennings, who led all scorers with 35 big ones, was already celebrating pull-up threes with gorilla impersonations in the middle of the third quarter, despite the game being well within Chicago’s reach.  Then, in the fourth, he just got straight ridiculous.  After busting a move that sent Joakim Noah into a drunken stumble and putting a needless amount of arc on a very important jump shot, Jennings sunk a two-point dagger and made a three-point monocle.  Strange, but when you’re ballin’ like Young Money was on this particular night you don’t have to make sense.  Jennings dropped 25 of his 35 in the second half and later cited Nate Robinson’s trash talk as his motivation to dominate.

Larry Sanders, who was responsible for 7 of Milwaukee’s 15 blocks, has now swatted four shots or more in five straight games.  It’s the longest streak in Bucks history since Kareem Abdul-Jabbar.  This is the second or third Bucks’ record of Jabbar’s that Sanders has matched this season, which speaks volumes about how ridiculous he’s been.

The Houston Rockets laid an egg in New Orleans, putting just 79 points (season low) on the board in a nine-point loss to the Hornets, who, according to someone on my Twitter timeline, became the first team to beat all three Texas teams in succession since the Lakers did it in 2009.  Despite his team’s struggles, James Harden broke Moses Malone’s franchise record for consecutive 25-point games with his 14th straight.  Harden basically provided a third of Houston’s offense, but he was also responsible for a third (7) of their 22 turnovers.  For New Orleans, Greivis Vasquez had another fine showing with 17 points and 11 assists.  Eric Gordon struggled (2-12, 5 points), but Vasquez got all the help he needed from Roger Mason, who is still in the NBA and also scored 17 points. 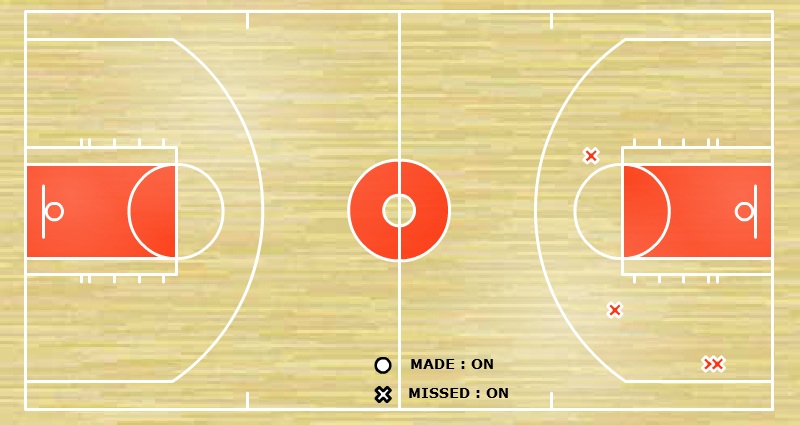 Whatever you do, Tyrus, just be sure to avoid that orange painted area at all costs!

The rest of the Bobcats were much more successful from the floor, shooting 48%, but they were unable to stop the Jazz from putting the ball through the basket at a much higher 54% clip.  Utah also knocked down 10 triples to Charlotte’s 4.  Al Jefferson and Paul Millsap proved to be far too formidable for the ‘Cats; they combined to score 45 points on 27 shots in the 112-102 victory.

The Lakers lost again. For the second straight night Kobe Bryant took fewer than 25 shots (22, 24) despite LA’s depleted lineup, and for the second straight night he and his comrades came up short.  To their credit, they did make the game interesting… well, they made the finish interesting, at least.  Trailing by 12 with 4:15 to go, the Lakers went on a 9-0 run to close to within three.  Manu Ginobili appeared to put them away with a cold-blooded three (note the blatantly illegal screen by Tiago Splitter that freed him up), but Earl Clark — yes, Earl Clark — made a game of it once again as he knocked down a three of his own off of a pick-and-pop with Steve Nash.  Earl Clark making shots was a thing that happened a lot more than anyone expected it would on Wednesday night; he finished with 22 points on 9-12 to go along with 13 rebounds.  Anyway, the Lakers earned themselves 12 seconds to tie the game and ultimately put the ball and the game in the hands of Kobe Bean Bryant.  He missed, but Danny Green knocked the ball towards the three-point line and into the hands of none other than Earl Clark.  When Clark fired his desperation three to beat the buzzer, I was 112% sure overtime was in the cards.  Unfortunately, it wasn’t.  How will the Lakers lose next?  Tune in on Friday to find out (they play OKC, by the way, so they are indeed going to lose).

Kobe finished 10-24 for 27 points. Metta World Peace finished 10-22 for 23 (and 7 steals).  World Peace has as many points (47) as Kobe over the past two games.  I’m still having a really hard time getting used to him not totally sucking.

Stephen Jackson, who was having a great game with 14 points in 18 minutes, aided the Lakers’ cause by getting ejected.

“Lemme just send the all-time leader in free-throw percentage to the line, make this shit interesting.”

Nikola Pekovic sent Kendrick Perkins crying to bench as he recorded his third straight double-double with 17 points and 10 rebounds.  Once again, he’d done it through just three quarters.  The Thunder won the game easily (106-84) as the Wolves had little else going for them, but it was truly hilarious to watch Perkins try to get under the skin of Pek only to end up getting sonned.  In the first half, Perkins had tried to start a little verbal spat with Nikola, but I don’t think he intended for the scariest player in the NBA to turn it into a chest-to-chest staredown.  When Pek did just that, Perk, who looked like he was about to shit more bricks than he shoots, backpedaled a bit before disengaging from the scuffle with a girly shove that moved him backwards more than it moved Pek forward.  Despite the Wolves’ loss, not only did Pekovic demonstrate that Perk is a scrub, he also exposed the fact that Kendrick is completely fugazy, just like his mentor in shenanigans, Kevin Garnett.

Derrick Williams, folks. He’s been playing decent basketball lately.  Yesterday, he scored 14 points and grabbed 11 rebounds.  It was his third straight game with 14 points or more.  Also of note, Williams has become Minnesota’s leading three-point shooter (percentage) by a wide margin.  Granted, the Wolves shoot threes about as effectively as a rock might shoot a video, but still… Williams is shooting better than 39% from out there.

It’s unwise to sleep on the Orlando Magic, as they will force you to compete for 48 minutes.  The Nuggets ultimately beat the Magic 108-105, but they had to score 38 points in the fourth in order to do it.  First thing’s first, though: who is this new Jameer Nelson and what did he do with the old Jameer Nelson?  New Jameer scored 20 points again, for the fourth game in a row.  Not since 2009 has he played a comparable stretch of basketball.  I’m beginning to fear that something bad has happened to the old Jameer Nelson.

Kenneth Faried’s hustle paved the way to victory for the Nuggets.  With 19 points and 19 rebounds, he fell just one board and a bricked free throw shy of a 20/20 line.  After the game, he didn’t seem to realize what he’d nearly done.

See, Kenneth, the thing about statistics is that you’re supposed to act like you don’t care about them.  We can work on this.

As for how the game ended… all I remember is Ty Lawson toasting Jameer Nelson for a crucial and-one layup, then JJ Redick missing a layup and allowing Andre Iguodala to score an easy deuce at the other end.  I could probably put the pieces together by referring to the play-by-play, but I don’t think it’s really necessary.  All you need to know is that the Magic played hard, competed, and blew it at the end.  It’s kind of what they do.  One clever twitterer effective described it as “tanking with dignity.”

The game of the night was played at Oakland’s Oracle Arena between the Grizzlies and the Warriors.  The Bay Area got super hyphy (and super angry: I’m not sure I’ve ever heard a louder “BULLSHIT” chant) as they watched their heroes bounce back from an 11-point third-quarter deficit.  The building’s roof was nearly blown off when sixth-man candidate Jarrett Jack made the following and-one jump shot…

Unfortunately, the Warriors made their big run in the second half, when they were shooting in front of the Memphis bench.  One can only imagine the things Kent Bazemore must’ve been doing on the sideline.  Why there isn’t a camera focused on him at all times is beyond me (seriously, why not put Bazemore in a little rectangle in the bottom corner of the screen?).  Anyway, the Grizzlies were able to restore order and take the W (94-87) by killing the Dubs on the offensive glass.  Marreese Speights, Z-Bo, and Rudy Gay racked up eight second-chance points in the fourth quarter alone.  Randolph led the Grizzlies in scoring and rebounding with 19 and 12.  Getcha weight up, David Lee.

Vince Carter failed to box out Caron Butler twice in one critical possession as the Clippers beat the Mavericks 99-93.  Up four with a minute and a half to play, the Clipps were able to burn 70 seconds because Carter couldn’t find it in him to put his ass into Butler’s midsection.  The Clippers never did score, but the game was too far gone once the Mavs got the ball back.  Former teammates Chris Paul and Darren Collison appear to have had a nice little battle — they finished with 19/16 and 22/6, respectively — but I can’t attest to that firsthand because the Clippers were being boring and I changed the channel.  The Mavericks have now lost 10 straight games to non-Wizards basketball teams.

Box Score Observations: Kyrie Irving’s 33 points on 11-15 paced the Cavs as they picked up a nice little 16-point win over the Hawks.  The Hawks, who have lost four games in a row, are suddenly just 2.5 games ahead of the Boston Celtics, currently eighth in the East.  Speaking of Boston, they got 12 points and 16 boards from studly rookie Jared Sullinger as they beat the Suns 87-79.  Michael Beasley played 5 minutes and 15 seconds more than I did.  Jose Calderon, Amir Johnson, and Landry f@cking Fields all had double-doubles as the Craptors crushed the Suxers 90-72.  I feel like the Craptors aren’t even crap anymore, but they’re still 13-22, so I guess they are.

Highlight Recap: Kobe Bryant shows off his handle.  Ricard Rubio wrap-around pass.  Kyrie Irving clowns Jeff Teague.  Dante Cunningham tries to decide if he wants to make a good play, a bad play, or both.  McBob.  DeQuan Jones.  Lastly, check out this dunk from a college game.  I’d rather watch infomercials than college basketball, but this play is legit…

Jamaal Franklin, I salute you.  That was awesomely unnecessary.

One Response to The Starting Lineup: Brandon Jennings Turns His Swag On