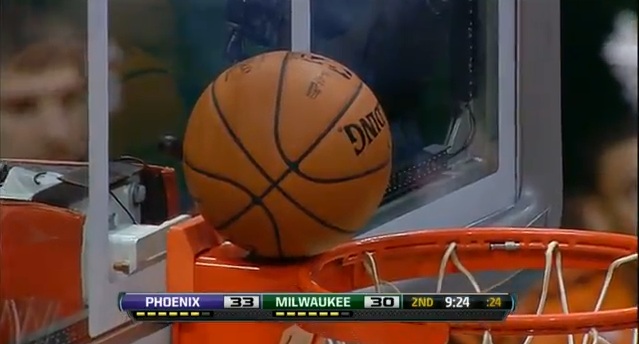 The back of the Phoenix Suns’ rim at the BMO Harris Bradley Center had a busy second quarter this Tuesday evening.  Shot after shot banged off the iron as the Suns went just 8-23 (34.8%) from the floor in the period, but the most interesting of their 15 misfires came early on, when Jermaine O’Neal ripped an offensive rebound and went for a stick back at the 9:30 mark.  A determined O’Neal managed to gouge out sufficient space to slip a layup attempt past the outstretched arm of Ekpe Udoh, but Udoh effected the trajectory of the shot just enough to cause it to take a funny bounce off of the glass.  Instead of falling through it hoop, the spinning basketball plopped down on the on the flat part of the rim between the cylinder and the backboard.  And there it sat… at least until somebody knocked it down.

The Bucks won the ensuing jump ball and were credited with a team rebound.  The unusual shot was just one of nine consecutive Phoenix misses to start the second quarter.  They went on to lose 108-99.