Normally, I would refrain from using the same word twice in one title.  However, “epic” has no true synonym, and no lesser term would befit this story.

It’s difficult to describe in one line the magnitude of the changes that took place within the realm of Boston Celtics basketball between the ’06/07 and ’07/08 NBA seasons.  My best efforts have led me to state that GM Danny Ainge conducted a complete and total overhaul of the team, but even that is probably a massive understatement.  I had actually forgotten just how bad the Celtics were prior to acquiring Ray Allen and Kevin Garnett during that pivotal summer of 2007.  Just months before, they had finished the season as the worst team in the Eastern Conference, and the second worst in the entire league.  For many, many years, things in Boston had been entirely different than they’ve been since Ainge made those acquisitions.  The NBA’s most storied franchise hadn’t won a title in more than two decades, and there were rumors that Paul Pierce, one of the greatest players in the team’s rich history, was about to demand a trade.  He’d spent much of the ’06/07 season sidelined by injury, including a 24-game stretch spanning from December to February during which the Celtics lost 16 games in a row.  To make matters more discouraging, it was actually not until Pierce returned that the team hit rock bottom.

On February 11th, 2007, the Celtics traveled to Minnesota to take on the Timberwolves.  The previous game — a 14-point home loss to the Nets — had been Pierce’s first game back from injury as well as Boston’s 17th straight loss.  Pierce would return to the starting lineup against Minnesota, giving Boston reason to hope that the losing would finally come to an end.  After all, the Timberwolves weren’t doing so hot themselves; Kevin Garnett and company had dropped 10 of their last 13, putting them three games below .500.

I was a senior in high school when this game was played, and I remember it well.  I watched it at a friend’s house with a group of buddies, all Celtics fans.  I lived about an hour outside of Boston, so I was the only one there who preferred that the Timberwolves win.  As much as I liked my friends, I’ve never been one to root against Ricky Davis.

Neither had they, actually.  Before the Celtics dealt Davis to the Timberwolves during the season prior, he’d been a fan favorite throughout his two and a half years spent playing in Boston.  I recall that he had his own cheering section called “The Buckets Brigade” and was generally looked upon quite favorably, despite the negative reputation he brought with him from Cleveland.  Come to think of it, Davis was actually the favorite player to one of my friends.  Oddly enough, another one of my buddies was a big fan of Mark Blount, who had landed in Minneapolis as part of the same trade as Davis.

That night, my friends’ beloved Celtics lost their franchise-record-setting 18th straight game.  Ironically, it wasn’t Kevin Garnett who paved Minnesota’s path to victory.  He did have a triple-double, mind you, but he did not lead the Wolves in scoring, nor did he score the basket that gave them a 109-107 lead with just a fraction of a second on the clock.  That was the old fan/friend favorite, Ricky Davis, who devastatingly recorded his 27th and 28th points of the ball game on a wide-open, catch-and-shoot jumper from the baseline.  Back then, the Celtics couldn’t defend worth a damn.

The image of Mark Blount, who dumped an entire sea’s worth of salt into the Celtics’ wound by scoring 20 points of his own, literally leaping towards Davis to give him a hug has always remained astoundingly fresh in my mind.  As has the reaction of my friends, who, in addition to being completely dumbfounded by the irony, couldn’t help but feel happy for their former heroes.  I remember suggesting many a time that they simply become honorary Timberwolves fans, but never was I able to get through to them with my foreign logic.  Shortly thereafter, their loyalty obviously paid off. 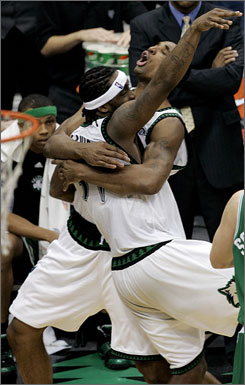