Weekend Recap, Featuring What The Clippers Did To The Warriors 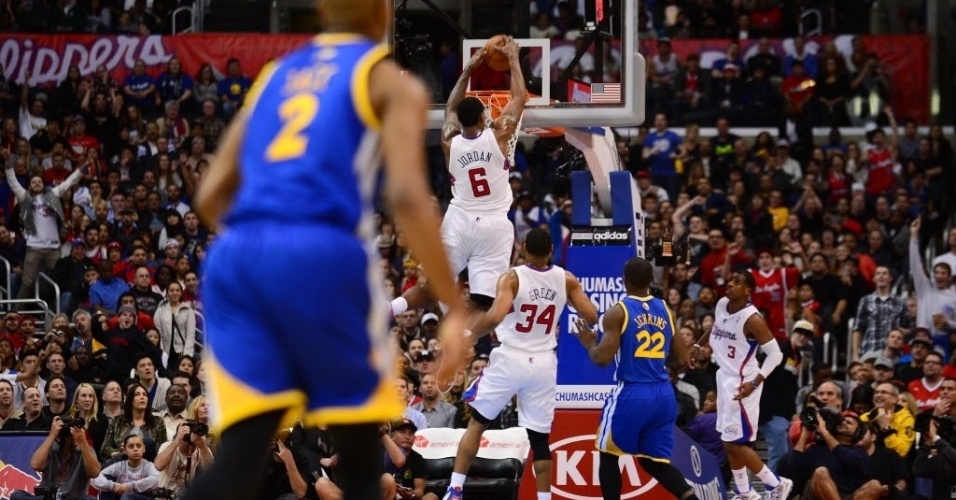 Clippers 115, Warriors 89
***Can you say revenge game? The Clippers, who’d suffered their second straight loss in a 21-point blowout at Oracle Arena on Wednesday, flexed their muscles to the tune of 56 points in the paint in this 26-point… sh!t, I can’t even come up with an appropriate word to effectively describe the brutality of this beating. Watching it unfold, I felt like a witness to basketball murder. The only thought that crossed my mind is how the Clippers ought to be the last team anyone wants to piss off. They’re so damn talented and athletic that any blowout they get involved in is going to be the AND1 Mixtape Tour, and even after they’ve taken their 38-point lead on three consecutive alley-oop dunks by the same player, one of which gets lobbed off the backboard…

…they’re just going to keep embarrassing you. Not because they’re big meanies that try to run up the score, but because Vinny Del Negro doesn’t have a single scrub to whom he can turn. So, once Chris Paul and Blake Griffin finish destroying you, it’s Jamal Crawford and Eric Bledsoe. The lineup the Clippers run in garbage time is literally better than some of the league’s starting fives. To get blown out by them is to be run over by a train, then hit by a truck. I can’t honestly say I’ve ever seen anything quite like it. I’ve only been around since ’88, but this Clipper team has got to be one of the greatest spectacles in all the history of basketball. The collective skill set of the roster is such that it’s just totally practical for them to humiliate the opposition.

Thunder 104, Raptors 92
***With all due respect to Alan Anderson, it probably wasn’t a good Raptors omen when he spent the entire second quarter making mince meat of Kevin Durant.  Despite Anderson’s 19 points in the second — just a bucket shy of the franchise record for points in a quarter — the Thunder led by two at the half.  When Anderson cooled off (he finished with 27, a career high), so did the Raptors… but the Thunder?  They continued to roll.
***Durant got his revenge indirectly at the expense of DeMaR DeRoZaN, who struggled offensively (4-16, 11 points) as he struggled even harder to defend the three-time scoring champion.  KD dropped 22 on just 11 attempts whilst throwing in 7 boards and 7 dimes to boot.  He showed the whole building who was boss with the following series of crossovers…

Bobcats 108, Pistons 101
***Andre Drummond was a dominant force down the stretch for the Pistons.  He blocked big shots, snagged crucial rebounds, and finished a couple of beautiful lobs from Will Bynum (the duo attempted FIVE alley-oops in the fourth quarter: two resulted in dunks, two in fouls, and one in a turnover).  However, Kemba Walker continued to attack Goliath, and with just seconds to go until his Bobcats would lose the battle, Walker finally put enough air under his floater to conquer the giant Drummond.

What the video doesn’t show you is Drummond swatting Walker’s first shot attempt of the possession all the way into the backcourt.  Kudos to Kemba for venturing right back into the paint.  He finished the game with just 20 points to show for his 23 shots, but he came up large when his team needed him most.
***Would you believe me if I told you that Tyrus Thomas went from being the worst player on the floor to the Bobcats’ catalyst between the fourth quarter and overtime?  Tyrus, who hasn’t been able to fall from a boat and hit water since 2011, made two of three jumpers in the overtime period.  He also blocked a shot and secured three rebounds, one of which was a key offensive board that led to a Walker field goal.  Prior to overtime he’d missed 9 of 11 shot attempts and grabbed just two boards.

***Dwight Howard simply can’t win.  In the Lakers’ latest loss (their third in a row), Howard missed just one of seven shots, matched his career high with 26 rebounds, and came up with four blocks.  One of these blocks appeared as though it could become the defensive play of the Lakers’ season.  Instead, the ball sailed directly into the hands of Danilo Gallinari, who fired a three-pointer and gave the Nuggets a two-possession lead with 14 seconds to go.  Ironically, the Lakers would’ve been better off had Dwight not kept the ball inbounds.
***Earl Clark scored two points without playing.  That’s more than Chris Duhon and Jordan Hamilton scored in 16 combined minutes.
***Shooting For Dummies, by Corey Brewer & Antawn Jamison.
***Andre Iguodala fired one of his patented crunch-time airballs, but he also made this nifty move on an impressive drive to the basket.  It was his second nifty move of the weekend.

Pacers 95, Bucks 80
***Lance Stephenson continues to look like a legitimate NBA player.  He scored 10 points for the sixth time in eight games and recorded a pair of dimes that would be worthy of boisterous applause at the Rucker.
***Between the seven and four minutes marks of the first quarter, Jeff Pendergraph spent about three minutes playing small forward for the Pacers.  I believe all those who have ever watched Jeff Pendergraph, who is typically utilized as a backup center, play basketball can understand why this blew my mind enough to take note.  Not only does Pendergraph lack perimeter skills, but he’s one of those guys that doesn’t even look right standing anywhere but under the basket.  By comparison, this was a lot weirder than watching Paul Millsap, Kenyon Martin, or Stromile Swift play the three.

Celtics 89, Hawks 81
***Lou Williams had 21 points on 9-11 at halftime, and, as you can imagine, the Celtics were losing badly.  Then, Paul Pierce stepped up and did what a team captain does.  From the Boston Herald…

ATLANTA — At halftime last night, the Celtics were falling apart on the court and, apparently, in their dressing room, as well.

Down 53-38 to the Hawks after playing a putrid 24 minutes, they were taking it out on each other before Paul Pierce stopped the noise.

“Doc (Rivers) came in and just wanted to tell guys what was wrong,” said Pierce, “and it just seemed like we were looking at one another and it was just like, you know, we’ve got to be able to accept coaching. Doc’s telling them what’s wrong, and, you know, guys are getting mad at him. And I’m like, this ain’t it. Don’t get mad at Doc. He’s coaching. We’ve got to get mad at this other team. It was needed.

“We had to bring the fight to them,” the captain said. “I think we were kind of bickering at each other a little bit too much, figuring out what kind of defense we run. That was a little bit too much for me. I just had to say, you know, ‘We’re fighting against one another. It’s against the team out there on the court. And once we realize that, we can play some ball.’

“And we stepped up that third quarter and played the type of ball that we know we can play.”

Read this part again: “Doc’s telling them what’s wrong, and, you know, guys are getting mad at him. And I’m like, this ain’t it. Don’t get mad at Doc. He’s coaching. We’ve got to get mad at this other team.”

What leadership from the captain.  I’m not even a Celtics fan and this quote inspired the hell out of me.

Knicks 114, Magic 106
***Nikola Vucevic can rebound.  Having finished with 18 boards, he now has a total of FIFTY-NINE rebounds in his last three games (!!!).  Guarding Carmelo Anthony, though?  Not really his forte.  As the Knicks came back from down six to start the fourth quarter, Melo finished off his third 40-point game of the season by dropping 16 in the last 10 minutes.  Orlando’s crunch-time defensive strategy? Josh McRoberts was the primary option, but Vucevic ended up trying to defend multiple Anthony isolations due to switches.  Neither Magic big man had any success whatsoever.

McRoberts has now been asked to guard LeBron and Carmelo down the stretch in recent games.  Both players gave him the business in Orlando Magic losses.  Why not Aaron Afflalo, Jacque Vaughn?  I realize your roster is thin, but there has to be a better way than to basically offer up Josh McRoberts to be slaughtered by the league’s premier scorers.

Blazers 102, Timberwolves 97
***Sadly, Nikola Pekovic left this game for good in the middle of the third quarter.  I say “sadly” because he may have been on his way to a career night, which could’ve put the Wolves over the hump (they made an impressive comeback from 20 down).  In just 21 minutes Pekovic racked up 21 points and 15 rebounds, but my favorite part of his line is the 9-14 in the FG column.  I find it humorous that three of his misses came during a single sequence of putback attempts, and that all five of his misses happened in the first four minutes.  He went 9-9 after that.
***You may recall that it was Minnesota who originally offered Nicolas Batum his $46 million contract.  He thanked the Wolves for making him filthy rich by lighting them up for 26 points.  Merci, monsiuer Kahn!

Hornets 99, Mavericks 96
***Eric Gordon is the clutchness.  He’d been back for just two games prior to this one, but neither that nor the fact that he was 1-9 stopped him from scoring his team’s last eight points to secure a Pelicans victory in overtime.
***Greivis Vasquez had an interesting fourth quarter.  He scored 15 of his 25 points in the period, but only 5 after OJ Mayo checked into the game with 7 minutes to play.  Though he laid many bricks (5-17), Mayo did an excellent job of stifling Vasquez’s attempts to score off the dribble.  Unfortunately for the Mavs, Gordon simply picked up where his teammate had left off.
***A really weird thing happened during the Mavericks’ final attempt to tie the game and send it to a second OT.  With Dallas down three, OJ Mayo got Eric Gordon in the air with a pump fake.  As Gordon sailed helplessly by, he somehow managed to kick the ball out of Mayo’s hands as OJ tried to release the potential game-tying shot.  Even watching on TV I could hear Mayo screaming, “HE KICKED MY ARM!”  That’s what I thought had happened, but replays made the play look kind of clean.  OJ’s argument seemed pretty convincing, though, and it was hard for me to believe that a flying Gordon could’ve kicked the ball out of Juice’s hands without making any contact to his arms.  Afterwards, Mark Cuban publicly criticized the officials.

One Response to Weekend Recap, Featuring What The Clippers Did To The Warriors