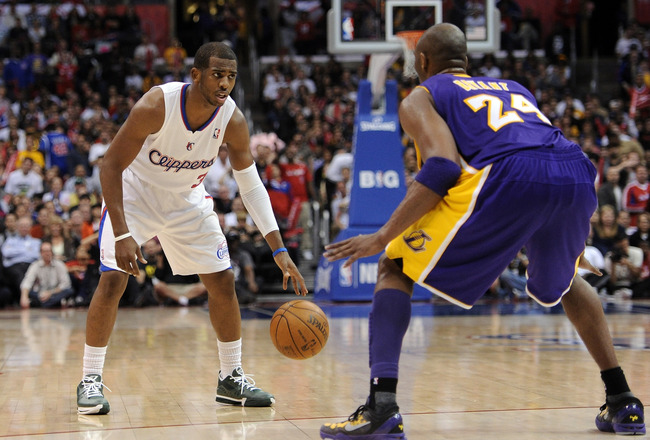 Considering that only one team led from start to finish, Friday’s battle for Los Angeles was unsually captivating.  Though the “visiting” Lakers were badly outplayed — they trailed by 19 in the fourth quarter and by double digits for approximately half the game — Kobe Bryant, who dropped 16 of his game-high 38 during a cold-blooded fourth-quarter rampage, should’ve had an opportunity to shoot for the tie (or possibly the lead) with just over a minute to go.  Had Dwight Howard simply allowed Metta World Peace to block a Chris Paul layup, this game may have concluded much differently.  Instead, Howard bailed Paul out by body bumping him from from behind, sending the 89.8% shooter to the line for a pair.  Each shot was made, and the Clippers led by four.

Though I wanted the Clippers to win, I’m not sure I wanted them to win so badly that a part of me wasn’t decidedly disappointed in Howard.  This game, as one-sided as it was, had become quite interesting, and it’s always a shame when an interesting game comes to its end at the free throw line.  As I said, all Howard had to do was let his teammate swat a Chris Paul layup.  And make no mistake about it, the layup was getting swatted.  I’m not sure the Lakers would’ve been able to collect the loose ball, which careened in the direction of Blake Griffin… but with less than two seconds on the shot clock, did that even matter?  In all likelihood, the Clippers’ possession was doomed, putting a red-hot Kobe Bryant in position to rise up and fire for the tie.  The way he was shooting the ball (9-12 from the start of the third quarter), one couldn’t help but assume Bean would’ve delivered.

I suppose there’s no point in crying over spilled milk.  What happened happened, and, as I said, what happened was still quite compelling.  Rather than fret over what could’ve been, let us discuss what was: a spirited battle between two of basketball’s best, Kobe Bryant and Chris Paul.

The determination of each warrior was apparent from the opening tip.  It showed in their body language, their shot attempts (25 apiece), and their point totals (38 for Bryant, 30 for Paul).  Paul, who recorded over half of his 13 assists in the first 12 minutes, was effective in getting his teammates going before he began to call his own number.  Kobe, whose teammates were of little use, did everything in his power to drag his Lakers along.  As the game progressed, the alpha males took more and more of the scoring burden upon themselves, calling their own numbers with increasing frequency as the consequence of each make or miss became greater and greater.  For the most part, all those who stood in their way were destroyed.  In a couple of thrilling instances, the Olympic teammates actually took turns destroying each other.  All in all, it was a beautiful exhibition of the fiery competition that can only stem from a certain degree of mutual respect.  Kobe Bryant and Chris Paul wanted this f@cking game, and it was truly a joy to watch them try their damnedest to take it.

As you become absorbed in the following video, carefully examine some of these moves and shots.  Assuming you’ve played basketball at some point in your lifetime, try to imagine yourself attempting to pull them off against the hacks at your local YMCA.  Then realize that multiple defenders in this video have appeared on All-Defensive teams (whether or not these appearances were deserving isn’t really relevant to this particular point, thank you very much).  I think that’s the most effective way to illustrate the immense degree of difficulty on display here.

At times, Bryant and Paul engaged — and engaged very consciously, I believe — in the sort of individual back-and-forth action that might take place in the most heated pickup game; a more structured version of Adrian Walton vs Vince Carter, if you will.  I apologize if my illustration of this regular-season basketball game comes off as sensationalism, but didn’t it seem to you as if there was something special going on here?  As spectacular a ball handler as Chris Paul is, it’s not every night that he repeatedly brutalizes ankles the way he did in this game.  Clearly, Paul not only intended to score, but to humiliate with some of those moves.  As for Kobe, when’s the last time you saw him finish a fast break with a massive poster dunk?  If someone other than Paul is back on defense, I don’t think Bryant does that.  Not because Chris Paul is a six-foot point guard, but because Kobe had a statement to make.  Both players had statements to make, leading to this exceptionally-spectacular, highly-spirited battle born out of a mutual respect between a couple of basketball titans.

Save for one bad foul and a strong performance from a Laker role player, this game was pretty much perfect.