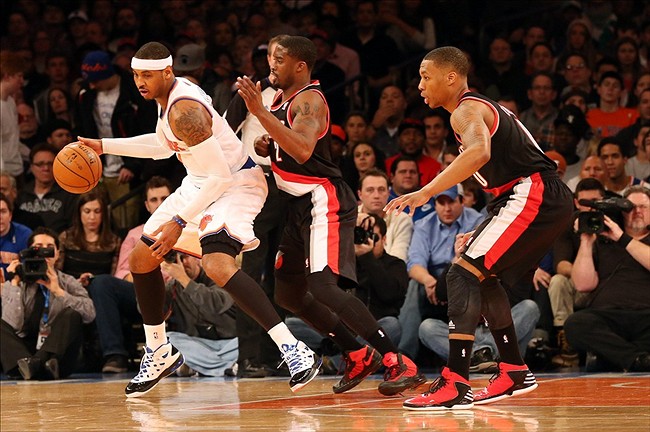 In a 105-100 loss to the Trail Blazers, a relatively-healthy Knicks squad suffered what was just their third home defeat of the season.  Thirty-one games in, Amare Stoudemire finally made his season debut, which could’ve gone better.  Stoudemire finished with six points, a rebound, a block, and a pair of turnovers in about 17 minutes of playing time.  He had some success working with Carmelo Anthony and Pablo Prigioni in the pick-and-roll, but basically looked like a guy who hasn’t played since the preseason — his timing, touch, and conditioning simply weren’t there, and he’ll need a few weeks on the floor to get it all back.

The unrelenting energy and effort of JJ Hickson didn’t make matters any easier for STAT and the Knicks.  Hickson had been tooling on Kurt Thomas and Tyson Chandler long before Amare even checked in, and he continued to dominate the paint throughout the early going.  Of his 18 points and 9 rebounds, 18 and 8 of them came in a first half that the Blazers won 58-47.  Unfortunately for Portland, foul trouble kept JJ on the shelf for the majority of the second half.  This helped the Knicks quickly close the gap to three with a 12-2 third quarter run, but a barrage of Nicolas Batum three-pointers (three in a row) ultimately kept them at bay, and the Blazers took a seven-point lead into the fourth.

At this point, Melo had 26.  He finished with 45. You do the math.  Down 15 with just four and a half minutes to go, the Knicks appeared dead in the water.  However, as the Blazers suddenly went cold from the outside (read: the Knicks finally started to play defense), Anthony set off on a scoring rampage.  With the help of JR Smith’s freakish athleticism and Clyde Frazier’s marvelous wordplay, Carmelo gave the ‘Bockers new life when his pull-up trifecta made it a one-possession game at the 57-second mark.  However, the fearless Damian Lillard (21 points) restored Blazer order with the umpteenth cold-blooded shot of his incredible rookie season…

Still, Carmelo refused to go away.  Using a screen from Tyson Chandler, he effortlessly made his way to the rim for a right-handed slam.  JJ Hickson, who’d failed to shut off Melo’s lane to the basket, compounded his folly (I’m assuming this is how Clyde put it, though I was watching the Blazers’ broadcast) by making a futile attempt to contest the shot from behind.  He ended up fouling Anthony, who converted the subsequent free throw to make it a one-possession game once again.  Sh!t nearly got REAL interesting after New York forced and won a jump ball.  As Carmelo calmly dribbled across halfcourt, I was approximately 112% sure he was about to send the game to overtime with yet another pull-up three-pointer.  It’s one of his favorite looks, and Nicolas Batum was stupid enough to give him space (despite the Knicks having used all their timeouts, rendering a two-point field goal virtually useless).  Fortunately for Nic, the shot was short and the Blazers escaped with their 16th W.

Had the Mavericks lost to the Wizards Rick Carlisle may have cut the entire roster. For those who haven’t been keeping up with the Mavs, the team has been mired in a six-game losing streak, and Coach Carlisle recently instituted a strict dress code and threatened suspensions to players “for not doing the things they’re supposed to do on the court.” Clearly, the losing was driving Carlisle off the deep end, but a break in the schedule and a fine game from Vince Carter helped to right the ship, at least temporarily. Carter scored 23 points (including each of the Mavs’ first six and five of their last ten) as Dallas defeated Washington 103-94. Carter’s 14 FGAs included five three-point attempts, of which he made two, but most notable were his three slam dunks. Considering that Vince is a soon-to-be 36 year old, this sort of high-flying guard play from him is virtually unprecedented. Observe Vinsanity:

Per shot, VC is taking more three-pointers than ever before… so, unfortunately, he’s definitely aging. However, it’s clear that he maintains enough of his athleticism to put on a show from time to time, despite the passing of yet another calendar year. As for his Mavericks, they move on to face the Heat… then the Jazz, Clippers, and Grizzlies over the next two weeks. With just two lottery match ups in the mix, Carlisle could be back on his private school principal tip before we know it.

Charlie Villanueva was ejected from Detroit’s 103-97 victory over Sacramento for a flagrant two foul on Isaiah Thomas.  Does this look like a flagrant two to you?

As they have for years, NBA officials continue to struggle mightily in making consistent calls in flagrant foul scenarios.  All too often — even given the expanded use of instant replay — officials make decisions based on the aftermath of a play rather than the actual play itself.  Here, Charlie Villanueva makes a hard foul on Isaiah Thomas.  I think we can all agree that a flagrant one would’ve been sufficient, and I’m not even convinced that it would’ve been called anything more than a common foul had Thomas simply gotten up and walked to the free throw line.  Instead, he made out like Villanueva had just attempted to knock his block off.  In reality, the bulk of the contact was in the body and Villanueva very nearly got a piece of the ball.  There was no shot to the head, face, or neck area, and the only flagrant aspect of the foul was in the way CV swung his arms with force that I suppose could be deemed “unnecessary.”  Still, the officials felt it necessary to remove him from the game… seemingly because Isaiah Thomas overreacted.  Scenarios such as this one are happening more and more each season, they take away from the game, and it’s an issue that I feel the league really needs to address.  Refs, please, make your calls based on the foul, not what happens as a result of the foul.

It should probably be noted that the Pistons were beating the Kings by a lot more than six for the majority of this game.  Having led by 10 to 15 for the almost all of the second and third quarters, Detroit entered the fourth with a 13-point advantage that seemed pretty safe.  Then Jimmer Fredette happened and nothing was safe anymore (especially the ankles of Brandon Knight).

I’m not going to act like I haven’t been fairly dismissive of Jimmer, but even I’ve noticed a certain trend — when Jimmer plays, Jimmer tends to play well.  This has been going on all season long (he appears to have an improved ability to get his own shot), and while his minutes per game increased from 11 to 17 between November and December, I still don’t feel as though Keith Smart has utilized him enough.  With underwhelming guards like John Salmons and Aaron Brooks eating up a good amount of regular playing time… why not free Jimmer?  There’s nothing to lose in doing so, that’s for damn sure.

Speaking of Aaron Brooks: The Kings are down three with 51 seconds to go.  Will Bynum advances the ball up the near side of the floor, where he crosses half court, but ends up being cornered by a couple of Sacramento defenders.  Having bobbled the ball and lost his dribble, Bynum looks like he’s about to attempt an awfully dangerous pass.  Before he has time to do so, however, Aaron Brooks runs up and intentionally grabs him.  Again, when the play began, the Kings were down just three with 51 seconds to go.  Apparently, Aaron Brooks forgot that the shot clock is only 24 seconds long and that there are single baskets worth three points.  Bynum made his free throws and Austin Daye went on to finish the Kings with this three-pointer.

The Clippers’ 17-game win streak has come to an end. To be honest, I’m not at all surprised that they lost so badly (78-92) to the Nuggets; Denver is a tough place to play (opponents are 1-10 this season), and the Clippers simply haven’t been themselves recently (over the past three games, fast-break points are down, the bench is providing eight fewer points than it has all season, and the team is shooting just 28% from the three-point line).  Last night, they simply looked burnt out.  The game was there to be won — without Ty Lawson, the Nuggets scored nearly 10 points fewer than usual — but the Clippers didn’t appear to want it bad enough.  Despite being unable to make a three-pointer all evening long, they continued to fire away, finishing 5-29 (17%) from deep.  Credit the Nuggets for defending the paint with strength and energy, but also realize that the Clipps are capable of locating better looks than the 20 combined triples launched by Willie Green, Caron Butler, Matt Barnes, Lamar Odom, and Eric Bledsoe.  As their shot selection indicates, the Clippers simply played a lazy game of basketball.

The Nuggets didn’t shoot particularly well themselves. At 7-23 from distance, they had far more success with the long ball than the Clippers did, but it was their 54 points in the paint that made the difference.  Strangely, about the only dude who shot well from the outside in this game was JaVale McGee.  Yes, that JaVale McGee.

Meanwhile, in Los Angeles, Jodie Meeks was throwing down reverse dunks.  The world didn’t end in 2012, but the world as we know it apparently did.

In other news from LA, the Lakers dropped their second of three as they allowed the Sixers — the NBA’s sixth most futile team when it comes to scoring — to top the century mark for the first time in six games.  Jrue Holiday styled on Steve Nash to the tune of 26 points and 10 assists in the 103-99 victory.  Spencer Hawes made a huge jumper to put the Sixers up four with just over a minute to go, and from that point the Lakers shot themselves in the foot.  Kobe Bryant (36 points) got trapped in the corner on the possession that followed Hawes’ shot… I couldn’t really tell if he was trying to shoot or pass (play-by-play seems to have it as a turnover), but the Lakers lost the ball.  Jason Richardson and Ron Artest went on to swap bricked threes before the Lakers, who should’ve been looking to foul at this point, mysteriously allowed Jrue Holiday to waltz down the lane and finish with an uncontested slam dunk.

Box Score Observations: Eric Gordon struggled in his second game back, scoring just 11 points on 5-17 as the Pelicans fell to the Hawks in a battle of the birds.  Josh Smith had a fantasy owner’s dream line with 23/13/7/3 STL/4 BLK.  Bradley Beal dropped 22 in Washington’s loss to Dallas.  JR Smith had 28/11/5 while Steve Novak failed to make a three for the third time in six games for New York.

Lowlight Recap: KWAMAY BROWN was back in his old stomping grounds on Tuesday night.  Overall, he did okay (six rebounds, a block, Dwight sucked), but did look a little silly when he bit on a Dwight Howard pump fake from 25 feet.  Howard ended up getting humiliated even worse, though, as Spencer Hawes swallowed up his 10-foot floater…