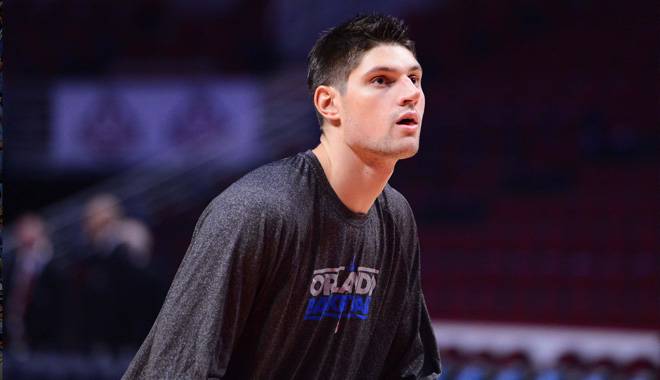 In grabbing 29 rebounds against the Miami Heat, Nikola Vucevic broke an Orlando Magic franchise record previously held by none other than Shaquille O’Neal.  With all due respect to Vucevic (who happens to be a fine young player averaging a double-double on the season), Chris Bosh should probably be ashamed of himself.  The Heat did manage to beat the Magic in overtime (112-110), snapping a two-game losing streak, but the victory can essentially be credited to LeBron James, who scored 17 of his game-high 36 in the final 17 minutes.  Meanwhile, Bosh, who did a lot of yapping this offseason about toughening up to play the five, ripped a whopping FOUR boards in 38 minutes and 19 seconds of playing time.  To be fair, Bosh did hit the jumper that sent the game to OT, but still… HE ALLOWED NIKOLA VUCEVIC TO BREAK SHAQUILLE F@CKING O’NEAL’S REBOUNDING RECORD!

Did I mention that Vucevic also had 20 points, 2 assists, 3 steals, and 2 blocks?  No?  Well he did.  If he happens to be on your fantasy team, congratulations — your week is off to a fantastic start.

Violet Palmer continues to be the most incompetent official in the history of professional sports.  The amazing thing about Violet is that it isn’t her temperament or something like that which gets in the way of her ability to ref the game properly.  Rather, she simply can’t seem to make good calls.  You know what else is amazing about Violet?  She’s been being videotaped doing a horrible job for the last 15 years, yet she remains very much employed.  I don’t get that.

Shout-out to Arron Afflalo, who dropped 10 of his 28 in the fourth.  He didn’t ball quite hard enough to earn his Orlando Magic a victory, but he did manage to keep pace with LeBron, which kept the ship afloat for an extra five minutes.  Not bad for a guy who used to be a pretty limited offensive player.

Jameer Nelson sat this one out with a left hip injury, and I felt that this hurt Orlando.  Part of the reason the Magic failed to maintain their fourth-quarter lead was because they struggled to control the ball and get into their offense when the Heat kicked the defensive pressure up a notch.  Hedo Turkoglu had some really ugly turnovers down the stretch, as did JJ Redick.  Nelson’s replacement, Ish Smith, hardly played, and Orlando often went without a true point guard in the latter stages of the game.  This caused things to get a little helter skelter, which benefited Miami.

BOBCATS WIN! The Charlotte Bobcats finally snapped an 18-game losing streak and surpassed seven victories by beating the Bulls in Chicago by a final score of 91-81.  Onetime Bulls Ben Gordon and Hakim Warrick had solid revenge games, with the former dropping 15 off the bench and the latter slam dunking in the beard of Marco Belinelli.  Meanwhile, Joakim Noah had one of the most inconspicuous games of his career.  Noah, who played more than 30 minutes, finished with 2 points and 4 rebounds to Jeff Adrien’s 9 points and 10 rebounds.

After all else had failed, Tom Thibodeau resorted to the hack-a-Bismack.  When that too failed, his Bulls continued to try to foul their way back into a 10-point game.  Clearly, they struggled to accept defeat at the hands of the Charlotte Bobcats… which, ironically, made them look that much more pathetic.

The Thunder ended up running away with this one (literally… they got out in transition and killed the Suns late), but take note of Luis Scola’s 24 points.  Seven of them came during a 15-3 Phoenix run that brought them from down 14 to within two.  Scola, who dropped 33 with just two free throw attempts on Saturday, did big things this holiday weekend.

The Nets were never going to beat the Spurs, but they were sort of competing until they got outscored 30-5 in the third quarter.  That’s correct; the Brooklyn Nets, who trailed by eight at the half, mustered a mere FIVE points in the entire third quarter.  They shot 2-20 and turned the ball over seven times in the period, leading to scoreless stretches of four and six minutes.  Deron Williams had all five points.

To the Nets’ credit, they did bounce back to win the fourth quarter 21-19.  However, they lost the game 104-73 (worst loss of the season).  Somewhere, Avery Johnson hasn’t stopped making strange noises yet.

With a pair of fourth-quarter three-pointers, Carlos Delfino broke up separate Hawks runs of 8-0 and 9-0.  Talk about timely shooting!  Delfino finished with a season-high 22 points on 6-8 from three in Houston’s 123-104 romping of Atlanta, and also matched a career high by dishing 8 assists (one of which traveled between the legs of Al Horford).  The Rockets never trailed after a 16-0 second-quarter run and ended the game on a 21-7 run.  Basketball is indeed a game of runs.

The Indiana Pacers elected to pack the paint against the Memphis Grizzlies, exposing an old issue of the Grizz’.  Though the Pacers scored just 88 points, they were able to escape the Fed Ex Forum with a W thanks to some timely buckets and poor Grizzly shooting.  As Indiana focused on interior defense against the NBA’s seventh-leading team in points in the paint, said team shot just 3-11 from range and approximately 30% on 27 attempts from outside the lane (could be a little off, as ESPN’s shot charts can’t be relied upon).  As I watched this game, I couldn’t help but notice how many of the Pacers’ defensive possessions ended with all five of their players in the painted area.  Observe the following screenshot… 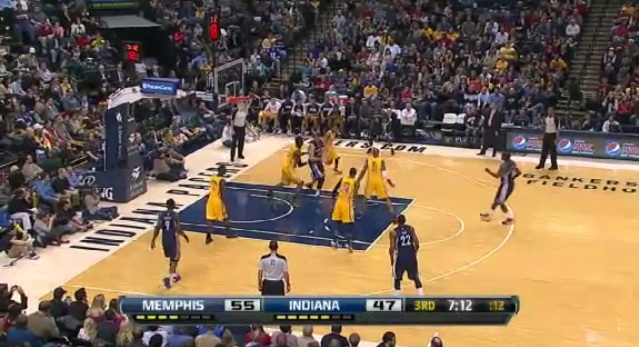 Clearly, the Pacers weren’t even the least bit worried about Marc Gasol kicking that ball out to Rudy Gay or Tony Allen.  Their game plan was to let Memphis fire away from the outside, and it worked.  The Grizzlies have been unable to knock down three-point shots for years now, and it cost them today.  The Pacers didn’t shoot particularly well from the floor either (28-70), but they converted 12 of 25 triples.  DJ Augustin, who’s been relegated to the bench for much of the season, hit a huge one to put Indiana up six with two minutes to go.  Paul George and Zach Randolph led all scorers with 21 apiece.