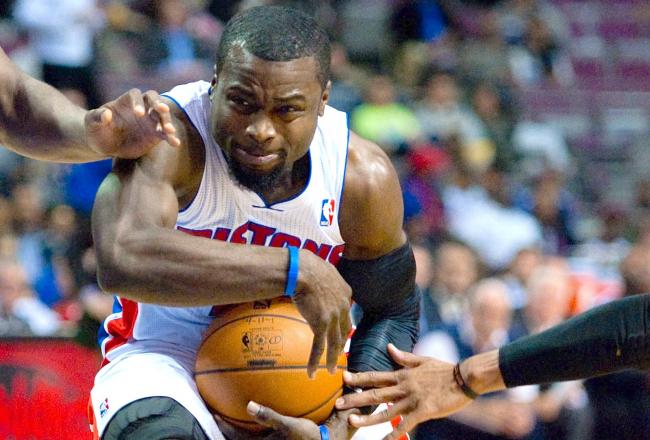 ***In 22 appearances, Will Bynum has a total of 164 points this season.  About a third of these points have been scored in the two games his Pistons have played since Christmas.  On Wednesday, Bynum and his season-high 31 spearheaded a Detroit bench attack that racked up 85 points in a double-overtime loss to the Hawks.  As impressive as Bynum was, Jeff Teague stole the show down the stretch.  On Friday, however, Bynum almost single-handedly delivered the people of Detroit a Pistons a victory over the mighty Heat by dropping 13 of his 25 in the fourth quarter.

As you can see, Miami had no answer for the smallest player on either team’s roster.  Remarkably, Bynum and the Pistons did have an answer each and every time Miami attempted to slice into the lead.  Bad teams often struggle to withstand the blows of a team like the Heat (and Miami did make plays; they scored 99 points), but the Pistons had no such trouble on this particular occasion.

***Individually, LeBron had himself an exceptional evening at The Palace, where he’s been known to put in work.  James finished 15-22 from the floor with 35 points, the second most he’s scored this season.  He has now surpassed 20 points in 48 consecutive games, Playoffs included.

***Jameer Nelson presently has one of the most underrated crossovers in basketball.  You’ll never find him on any lists of premier ball handlers, but he has a left-to-right that’ll leave an inconspicuous defender with a set of broken ankles.  Exhibit A:

Step your film game up, Shelvin.  Jameer loves to fake like he’s about to use the screen, but he really intends to cook you.  Oh, speaking of Shelvin Mack, I almost forgot: Shelvin plays for the Wizards, who actually managed to win this game.  Yep, Orlando is that bad without Big Baby.  Relative to the rest of their roster, Baby is an offensive juggernaut and a defensive presence.

***According to Nets owner Mikhail Prokhorov, the decision to fire Avery Johnson was made last week.  And you thought you were joking when you said they waited for a matchup with the Bobcats.  As expected, the ‘Cats rolled over for a 17th time in a row, allowing Brooklyn to avoid humiliation and take an easy W by the score of 97-81.  They ought to pick up another victory against the 7-24 Cavaliers tonight, but you never know what Kyrie Irving has up his sleeve.

***In Charlotte’s loss to Brooklyn, Bismack Biyombo did something that had been done just once since 1985.  In going 6-12 from the stripe and 0-0 from the floor, Bismack became the first player since Golden State’s Larry Smith (1992) to take 12 free throws without attempting a single field goal.  Being that Biyombo went just 6-12 from the line, I suppose this unusual box score reflects positively on Brooklyn’s refusal to let him shoot.

***In beating the Sixers 96-89, the Warriors became the league’s sixth team to win their 20th game.  Many expected Golden State to improve significantly this season, but I think they’ve surpassed the early expectations of even the most optimistic analysts.  Yesterday marked the fifth time in seven games that Jarrett Jack and Carl Landry, two of the offseason’s most slept-on acquisitions, have combined to score 30 points.  Things are going so well in Golden State right now that even Andris Biedrins appears to have reestablished a pulse.

Prior to sinking this improbable shot (along with the Knicks’ hopes of a historic, 27-point comeback victory), Johnson had missed all 11 of his three-point tries this season as well as his final five of last season… meaning that he’d clunked 16 in a row.  If Johnson were to continue at this exact same clip he’d be due to hit another triple precisely 20 games from now.  Guess who the Kings play 20 games from now?  You got it, the New York Knickerbockers!

***Josh Smith officially missed the fourth quarter of the Hawks’ 102-94 victory over the Cavaliers with a strained hip flexor, but there’s some suspicion that Larry Drew may not have been inclined to put him back in the game regardless.  Prior to tip off, Drew addressed Smith’s poor shot selection in Wednesday’s double-overtime win vs the Pistons.  Against the Cavs, Smith took nine shots from outside the paint and predictably bricked eight of them.

***In a game I didn’t see, Denver beat Dallas 106-85 as Danilo Gallinari scored a career-high 39 points.  Gallo, who’s basically been struggling to find his range from distance since leaving New York, knocked down seven threes — his most in over three calendar years — and on just 11 attempts.