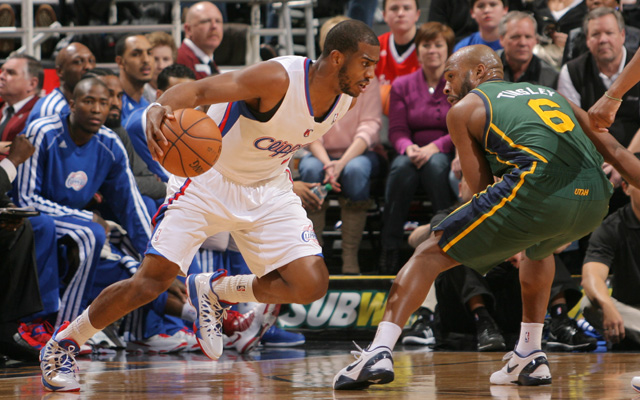 As the Clippers rallied from 19 down to keep what is now a 16-game win streak alive in Utah, Chris Paul was the man of the hour.  Though Paul struggled with his jump shot (0-5 from three) throughout the second night of a back-to-back, his game-high 29 points included the Clippers’ final 7.  As we have come to expect, Paul was brilliantly cold blooded down the stretch, knocking down a variety of crucial shots and free throws.  Like I said, he was the man of the hour, and deservingly so.  However, had it not been for a valiant collective effort amongst the Clipps, Paul wouldn’t have been able to put the finishing touches on this impressive come-from-behind victory.  For instance, I firmly believe it was the defense of Matt Barnes that altered the course of this contest.

Prior to falling behind by double figures, the Clipps had actually gotten off to a fantastic start.  They won the first quarter 29-22, and while I fully understand the insignificance of an early seven-point lead, the ease with which the Clippers were scoring made it appear as though they were in complete control.  Things changed drastically in the second quarter, however, as the Clipper bench failed to maintain the momentum the starters had established.  Utah began to play extremely physical, and Randy Foye torched Jamal Crawford to the tune of 14 first-half points.  Come halftime, the Jazz led 58-48.

It was in the third quarter that I first felt the Clipper win streak was coming to an end.  The Jazz were simply quicker to every loose ball, and no one could keep within arm’s length of Randy Foye, who’d put another six points on the board by the time Utah took their largest lead of 19 (8:08).  Having seen enough of Foye and his five three-pointers, Vinny Del Negro replaced Willie Green with Matt Barnes.  Randy Foye failed to scratch for the remainder of the quarter.

Upon inserting Barnes, the Clippers went on a 29-14 run.  This closed the gap to four going into the fourth quarter, and Barnes had his fingerprints all over the turnaround.  He set the whole thing off with a pair of steals, knocked down a momentous three-pointer, and rendered the aforementioned Foye utterly useless.  The Clippers made a huge move to cut deficit from 11 to 5 as Foye missed three consecutive jump shots with Barnes draped all over him.  At the end of three, Utah’s lead was just four.

In the fourth, the Clippers struggled to surpass the Jazz.  Caron Butler briefly tied the game at 90 with a four-point play, but the Jazz quickly rebuilt a five-point advantage. They eclipsed the century mark in the process, invoking Lawler’s Law, which famously states that the first team to 100 points wins (it’s the law!).  The law had not been broken in any Clipper game this season, but being that this was a high-scoring affair, there was hope yet.

It wasn’t until the 3:09 mark that DeAndre Jordan banked in the free throw that finally established the first Clipper lead (107-106) since the second quarter.  Shortly thereafter, Chris Paul took over.  Beginning with a pair of go-ahead free throws at the 1:35 mark, Paul scored seven consecutive Clipper points. With 23 seconds to play, he abused Gordon Hayward and made it a three-point ball game..

Still, the Jazz weren’t going to go quietly into the night.  Randy Foye put his head down, drove to the rack, and drew a foul on DeAndre Jordan.  He made both.

It was at this point that things got a little weird.  When Paul, a 90% free-throw shooter, surprisingly missed the second of two, Blake Griffin was called for a loose ball foul in the rebounding action.  To say the call was questionable would be kind… but nevertheless, Al Jefferson capitalized on his opportunity to knot it up at 114.  With the final move of regulation apparently belonging to the cold-blooded Chris Paul, Ty Corbin elected to ask Gordon Hayward, who’d shown no ability to stay in front of the lightning-quick point guard, to stop CP once again.  Unfortunately, we never got to find out whether or not he’d have been able to do so.

Makeup call?  Al Jefferson blatantly reached in (why is Al Jefferson on the floor for a crucial defensive possession?), but it’s tough to tell how much contact was made.  Normally, I think this gets let go down the stretch.  That being said, I suppose the officials had set a certain standard with their aforementioned call on Blake Griffin.  The contact on the two plays was comparably inconsequential, making the whistles consistent, at least.

In Utah’s final attempt to either win or force overtime, Randy Foye leaned into the chest of Matt Barnes and fired a desperation three.  He very nearly put it in (and very nearly caused me and thousands of others to suffer heart attacks), but once again, Barnes had defended him flawlessly.  Much to the chagrin of an especially hostile crowd, no foul was awarded to the home team.  I sincerely hope Derrick Stafford, Matt Boland, and Gary Zielinski escaped Energy Solutions Arena with their lives.

It wasn’t pretty, but the Clippers had done it; they’d come back from down 19, broken the law, and beaten the Jazz in Utah by a score of 116-114.  The highlight plays that recently inspired Magic Johnson to dub these Clippers the new showtime were few and far between, but no team can be at the top of its game for 64 quarters in a row.  Having humiliated the majority of opponents over their previous 15 games, the Clipps could’ve become frustrated by the fact that they weren’t firing on all cylinders and simply let this one go.  To be honest, I kind of expected them to do that when they nearly fell behind by 20.  This being the second game of a difficult back-to-back, the third game in four nights… the excuses were built in.  Salt Lake City is a tough place to win, especially when old friend Randy Foye decides to go off for 28 points.  All things considered, no one would’ve been overly disappointed in the Clippers had they let this one go.

No one except the Clippers, that is.