The Starting Lineup: JR Smith Does It Again! 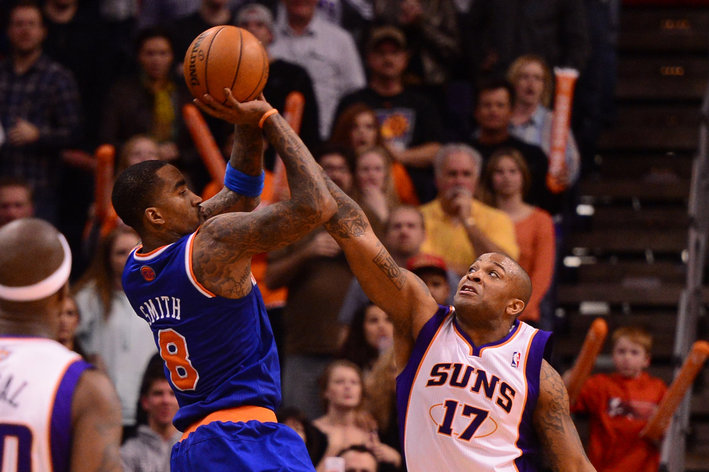 No Melo?  No problem. Well, sort of.  The Knicks appeared to have things under control in Phoenix, where they led by double digits after a 27-15 second quarter.  That was before Jared Dudley started to sizzle from beyond the arc, though.  In a third quarter that the Knicks lost 32-22, Dudley knocked down three of his five triples.  The game remained tight down the stretch, and that’s when the Knicks looked to JR Smith to bring it home.  Facing a brilliant one-on-one defender in PJ Tucker, JR was forced to take a couple of shots that were, quite frankly, pretty awful.  The thing about JR Smith, though, is that he makes pretty awful shots at a 41% clip.  To force JR to dribble the air out of the ball, spin in a circle or two, and fade away… that’s essentially to put him in his comfort zone.

If ever a better example of “great offense beats great defense” there has been, I’ve never seen it.  Short of blocking the attempts, which would’ve been nearly impossible considering the way JR faded, PJ Tucker did absolutely everything anyone could possibly do to prevent these shots from going in.  The way he defended on the first possession, most players kick the ball over to Jason Kidd for a rushed three-point attempt.  The fact that JR could even get that shot off remotely comfortably speaks volumes about him as a bad shot maker.  The second shot was a little different, as JR had no choice but to catch and fire… but still, Tucker was right there once again.  He chased Smith over the top of the Chandler screen, rose with him, and came within inches of a deflection without committing a foul.  Flawlessly defended, JR swished it anyway.  Unbelievable shot.

This was JR’s second buzzer-beating game-winner in 21 days. On December 5th, he beat the Bobcats from the same side of the floor on a similarly-well-contested shot over Michael Kidd-Gilchrist.  Coincidentally, Smith failed to finish with more points than shot attempts in each of these two games.  In Charlotte, JR went just 6-16 with 13 points, and in Phoenix he finished 11-27 for 27 points (meaning that he was just 9-25, or 36%, prior to making a pair of impossible shots).  Confidence?  To say JR Smith is confident would be to say it’s cold in Antarctica.

In addition to Carmelo Anthony, the Knicks were without Raymond Felton, who will be out for a few weeks with a fractured pinky on his shooting hand.  Felton’s absence forced Jason Kidd into extensive duty, and the veteran delivered to the tune of 23/6/8.  Chris Copeland also had a solid game in place of Anthony, scoring 14 points off the bench.  For the Suns, Jared Dudley ended up dropping a career-high 36 points.  Goran Dragic left the game just before halftime after hitting the deck hard on a fast-break layup attempt.  As he flew in for the finish, JR Smith nudged him from behind, knocking him off balance.  It was a surprisingly-dirty play from a guy whose leaping ability frequently puts him in danger of suffering the same type of fall.  JR is lucky he wasn’t ejected, as his Knicks likely would’ve lost.

Personally, I thought JR’s foul on Dragic was dirtier than the one that got Dwight Howard ejected from LA’s 126-114 loss to Denver.  Observe…

Now, this is obviously a flagrant foul by Dwight Howard.  The hit was intentional and no play was made on the ball, categorizing it as flagrant by definition.  However, I don’t feel that this play was nearly as dangerous as Smith’s (at least Faried was able to anticipate the contact; Dragic was subjected to a sneak attack).  I’d have given Smith a flagrant two and Dwight a flagrant one.

Offensively, Kobe Bryant did everything he could to try and drag his Lakers to victory.  His 40 points came on just 24 shots and represent his 10th consecutive 30-point game (the 19th-longest streak in NBA history).  Defensively?  Not so much.  Observe these highlights of Corey Brewer’s 27-point explosion…

As you can see, it wasn’t all Kobe’s fault.  In some cases the Lakers’ defense was so collectively poor that it’s difficult to identify exactly who is even responsible for checking Brewer.  On one instance, though, you can see that Kobe simply lost sight of Brewer, allowing him an and-one layup.  On Brewer’s buzzer-beating three-pointer, Kobe failed to raise a hand above his shoulder.  On yet another three-pointer, there are four Lakers in the picture… but Kobe is nowhere to be found (and yes, he was in the game; I checked the play-by-play).  If the Lakers are to fully right this ship, their defensive effort needs to improve (though Bryant will be named to his 13th All-Defensive team even if it doesn’t.  I’d put my life savings on it).

In an up-and-down affair that often had the appearance of a sloppy pickup game, the Timberwolves led the Rockets 64-61 through three.  Though the Wolves hadn’t gotten much of anything from their lauded frontcourt (credit Omer Asik, who had 17 rebounds), they’d been able to gain a slight advantage largely thanks to JJ Barea and Alexey Shved.  Through three, the duo had vastly outplayed James Harden and Jeremy Lin.  For the first time in four games, Lin never would get it going (8 points, 7 TOs), but Harden… uh… did.  In a 26-20 fourth quarter that swung the game in favor of the Rockets, Harden exploded for 17 of his 30 points.  Having made just two field goals in the paint all night long, Harden suddenly entered into attack mode.  Each of Houston’s last three field goals were Harden layups, and four of his six free throw attempts also came in the period.

The Rockets, who had been 0-6 on the road against Western Conference teams, extend their win streak to five games.  The T-Wolves, on the other hand, suffer their second consecutive setback; they’ve now dropped their last two games despite leading at the start of the fourth quarter.  Kevin Love was pretty awful, going just 3-14 for 7 points.  He bricked a ton of jumpers and failed to step up when the Wolves were in need of some crunch-time buckets.  JJ Barea attempted to close the game in his stead, but coughed the ball up thrice in the last couple of minutes.  Ugly, ugly loss for the Wolves.

The Pistons’ starters allowed the Hawks 16 fast-break points in the first quarter.  Their bench brought them back and sent the game to double-overtime.  Having watched Josh Smith score 12 of his 21 first-half points in the opening quarter, Lawrence Frank elected to go with his reserves for most of the game.  Will Bynum delivered 31 of 85 Piston bench points, the most in an NBA game this season, but it was Jeff Teague who would come up largest latest.  I picked this game up at the end of the first OT, and that’s essentially when Teague’s takeover began.  With his Hawks down 110-112, Teague drilled a go-ahead three, then came up with a steal.  A controversial incorrect clear-path foul led to a pair of free throws, both of which he made before scoring a driving layup.  His individual 7-0 run gave the Hawks a five-point lead and ultimately led to a 126-119 victory.

***Unfortunately, the update I promised isn’t going to happen.  My apologies, but sometimes there simply aren’t enough hours in the day.  Stay tuned for the Poster of the Day, which will appear this afternoon, as usual.