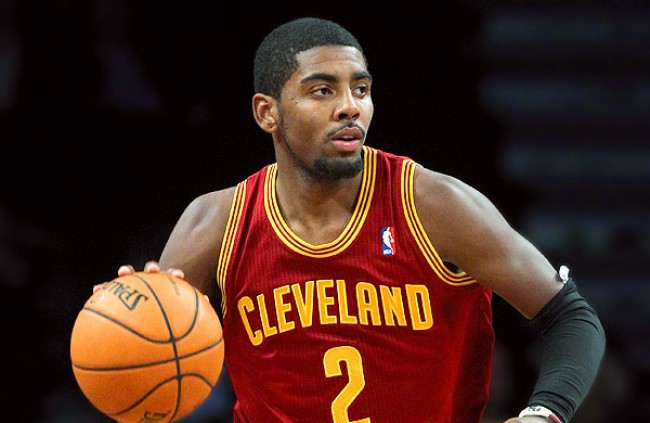 Kyrie Irving had a relatively quiet game as the Cavaliers cruised past the Bucks on Saturday evening.  With just 15 points, Irving was the Cavs’ third-leading scorer in a 94-82 victory.  He attempted only 12 shots [insert Kobe joke here] — the second fewest he’s taken all season — and his four dimes left him about 14 cents short of his average.  For the most part, Kyrie was pretty passive; the Bucks never once led in the game, and with guys Tristan Thompson, CJ Miles, Tyler Zeller, and Dion Waiters able to carry the load, I suppose the Cavalier star figured he might as well go with the flow.

That’s not to say he didn’t show up to get the job done, though.  When Milwaukee put together a sudden 8-0 run late in the third, a 20-point Cleveland lead shrunk to 12.  Uninterested in giving the Bucks any semblance of hope, Irving immediately proceeded to seek out the basketball and make the play of the game — a vicious crossover that dizzied Monta Ellis and led to a snazzy assist and Cavalier slam…

I would normally get on Monta’s case for reaching, but he’d already been broken off before he took his desperate swipe at the ball.  His fatal mistake here was actually in the way he was moving his feet.  If you watch carefully you’ll notice that Ellis crossed his legs, rendering him unable to react to Kyrie’s abrupt change in direction.  When you’re shuffling, kids, never allow your legs to cross like that.  If you do, you’ll be liable to wind up with a broken ankle.

And for you bigger kids, when your point guard makes a spectacular move and sets you up for an uncontested score, for christ’s sake, dunk that ball with more authority than Tyler Zeller did.  Remember, no matter how good the ice cream, a sundae simply isn’t quite as tasty without that cherry on top.