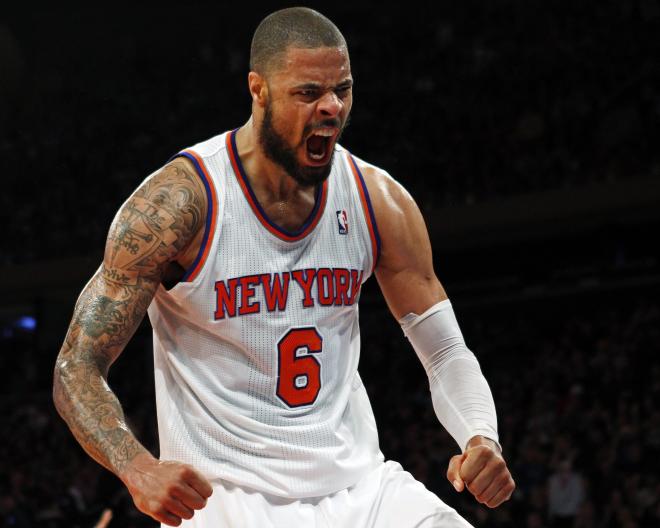 To say that the Nets had some trouble containing the pick-and-roll in their 100-86 loss to the Knicks would be a pretty massive understatement.  Tyson Chandler, who converted 7 of 11 field goal attempts, scored 16 of the easiest points you’ll ever see as he slammed lob after lob from Raymond Felton, who had absolutely no trouble getting the ball to his big man.  When’s the last time two players teamed up for FIVE alley-oops in a single game?

Felton and Chandler already led the league in alley-oop conversions, so this performance only extended their advantage.  In addition to the pick-and-roll game, New York also had its heavy hitters firing on all cylinders; Carmelo Anthony dropped a game-high 31 and JR Smith pitched in 19 off the bench.  Anthony and Smith nearly outscored Brooklyn’s starting lineup by themselves (50-55).  With his Nets now 2-8 in December, Avery Johnson’s job security has got to come into question.  Hopefully he and his squad are able to right the ship soon… I don’t want to see this dude back on TV.

Was anyone else disappointed by the atmosphere at Madison Square Garden?  I expected Knicks fans to be super hyped about their first home game against the relocated Nets, but the noise level certainly didn’t indicate any unusual level of excitement.  Hell, it seemed to me as though the Knicks had louder contingents at both the games in Brooklyn.  It’s not like this game was a blowout from tip to buzzer, and even when it did become a blowout the Knicks were winning… so yeah, I was definitely disappointed by the crowd’s apparent lack of enthusiasm.

Gerald Green sighting! As the Pacers demolished the Jazz in Indiana, Gerald, who’s been struggling mightily since the end of a promising preseason, lit up the board for a season-high 21 points.  Last year’s league pass sensation shot well from the floor (7-12) and from distance (4-6) and highlighted his best performance as a Pacer with a stylish one-handed jam.

If ever a team needed a 104-84 victory, it was this one.  They’d only surpassed the century mark in one other non-overtime game, and Green himself hadn’t yet dropped 20 despite having done so 7 times in 31 games with the Nets last spring.  I imagine that this had to be a real feel-good outing for both Green and the Pacers, who’ve been mired in offensive struggles all season long.  Hopefully Gerald can build up some confidence and pick his game up a bit.  As a fan, I feel like I’m being shortchanged when Green isn’t making regular appearances in the top 10.  From the perspective of a league pass junkie, his inability to carve out a niche with the Pacers has been one of the foremost disappointments of the season thus far.

It should be noted that Paul George continues to get it done. Against Utah, George posted his sixth 20-point game this month, and he did so on an efficient 9-13 from the floor.  Even more impressive than George’s offense was his defense — he swatted four shots on Wednesday, a season high, and threw in a steal for good measure.  George now has at least one blocked shot in each of his last four games, which is pretty damn impressive for a perimeter player (even a tall, athletic one).

The Thunder nearly allowed the Hawks to come back from a 15-point third-quarter deficit, but Kevin Durant wasn’t about to let it go down like that.  When Atlanta closed to within five at the eight-minute mark of the fourth, Durant took over, scoring 16 points in six minutes.  He immediately made the lead eight by sinking a cold-blooded triple, then made it larger by humiliating Josh Smith at both ends…

Durant finished with 18 in the period and 41 in the game.  He did all that on just 23 shots and threw in 13 rebounds to boot.  Prior to Durant’s commanding takeover, Russell Westbrook had been equally dominant, scoring 21 of his 27 in the first half.

Chris Paul and the Clippers made some significant history in their 93-77 blowout over the Pelicans.  With a minute and a half to go in the second quarter, Paul found Blake Griffin for an easy layup during an 11-0 Clipper run.  Unknowingly, he had just recorded the 5,000th assist of his career, making him the third-youngest and fifth-fastest player ever to reach the milestone.  Probably a logical time to send some fruit baskets to those lenient New Orleans scorekeepers, Chris.  Remember, you’d still be hundreds of dimes shy if it wasn’t for their help.

The history making didn’t end with Paul’s pass. The Clippers extended their win streak to 11, matching that of the 1974/75 Buffalo Braves for the longest in franchise history.  According to the AP’s game recap, an ecstatic Donald Sterling led cheers in the locker room and even gave Vinny Del Negro what must’ve been the one of the most uncomfortable hugs of all-time.  Winning has been good for Sterling’s bottom line, I suppose (and it’s a good thing, because the courts of law haven’t)… so much so that it’s actually made him not hate his own players.

Chris Paul dunked again. If I’m not mistaken, this was his third jam of the season…

What does Shannon Brown have against the Bobcats? I know they traded him and everything, but damn, it’s not like he didn’t have a successful run with the Lakers.  Nevertheless, Brown appears to be holding some sort of grudge.  Last night, he hit the ‘Cats up for a season-high 26, and 18 in third quarter alone.  The game was eerily similar to the one he had in Charlotte on November 7th, when he scored 14 of his then-season-high 24 in the fourth.  Brown’s big quarter helped the Suns outscore the Bobcats 33-22 and ultimately run away with an easy 121-104 victory.  Despite 52 points scored by Kemba Walker and Michael Kidd-Gilchrist, Charlotte has now dropped 13 in a row.  Assuming they lose their next three games in Denver, Golden State, and at home against Miami, the ‘Cats will match their second-longest losing streak of 2011/12, the worst NBA season of all-time.

Greg Smith scored 10 consecutive Houston points between the third and fourth quarters as the Rockets outgunned the Sixers 125-103.  For those of you who may not be familiar with Greg Smith, he’s a 6’10″, 250-pound center out of Fresno State.  He found himself on the Rockets by way of the D-League, and he’s had a fantastic season backing up Omer Asik.  Last night, Smith scored his 10 straight points simply by finishing layups and knocking down a pair of free throws, but the fact that all four of his consecutive buckets were assisted doesn’t take anything away from the performance.  It seems as though Smith, who averages 9.2 PPG in December, is always in the right place in the right time.  Not only does he work the baseline effectively, but he catches everything and finishes well with both power and finesse (67.2% at the rim, 13th amongst all centers with as many attempts).  Smith’s basic offensive skill set is complementary to that of Asik, an outstanding defender who struggles to finish at the rim (56.4%), and he seems to have great offensive chemistry with his teammates.

James Harden and Jeremy Lin each played some excellent basketball for the second game in a row.  Harden notched 33, his most in six games, while Lin scored 18.  Both players shot well over 50%, and Harden hardly shot at all — he only needed 12 attempts to reach 33 as he got to the stripe an astounding 18 times (made 17).

Paul Pierce dropped 40 — yes, FORTY — on the Cleveland Cavaliers. Alonzo Gee drifted a bit too much defensively, got hung up on a few screens, and before the young man could figure out what’d happened to him The Truth had already sunk six three-pointers.

With their 103-91 victory the Celtics snapped a three-game losing streak.  Pierce had most recently scored 40 last April in New York, but hadn’t done so in a Celtics win since May 16th of ’08… against Cleveland.  Oddly enough, three of Pierce’s previous four 40-point outings had come in Boston losses, with the lone exception being that aforementioned game against the Cavs.  Paul Pierce and Dan Gilbert, co-owners of the Cleveland Cavaliers.

Jarrett Jack (28 points) and Carl Landry (14 points) combined to score 30+ for the third straight game, but Golden State suffered a disappointing 131-127 loss in Sacramento on Tuesday.  Contrary to what the final score might suggest, the game did not go to overtime.  Both teams shot precisely 50%, with the Kings making 43 of 86 and the Warriors 46 of 92.  Since pretty much everybody not named Richard Jefferson did numbers in this game, I’m just going to link you to the box score.  Enjoy.

Box Score Observations: JJ Redick went for 17 points in helping the Magic beat the Wizards.  Not only was the 90-83 victory Orlando’s fourth in a row (12-13), but it officially makes them better than Dwight Howard’s Lakers (12-14).  The Raptors, who beat the Pistons 97-91, also won their fourth in a row.  Detroit got 22 offensive boards and a 35-point, 10-rebound night from Greg Monroe, but they left 12 points at the free-throw line and bricked 9 of 12 three-point attempts.  Alan Anderson’s 16 points for Toronto represent his third straight game in double figures.  Zach Randolph and Marc Gasol put in their usual yeoman’s work on the glass, combining for 29 rebounds (8 Z-Bounds) as the Grizzlies beat the Bucks 90-80.  Mississippi Moped went 1-14 from the floor, presumably in front of some family and friends.

Lowlight Recap: Maalik Wayns passes the ball to Bennett Salvatore, who does not play for the Philadelphia 76ers…