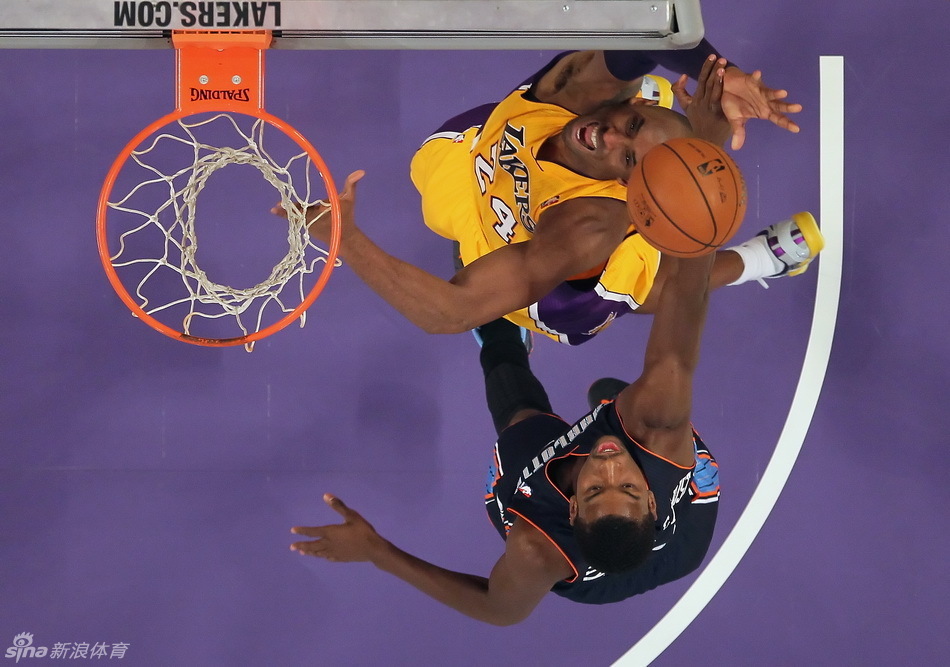 How, after throwing down on Dwight Howard with the force of mighty Thor, did Gerald Henderson miss that layup?  And Byron Mullens… how, just how did he manage to shoot the basketball backwards?  Trust that I’ve seen some ugly-ass shots from BJ, but never one that didn’t go towards the correct basket, at least.  As I watch this final Bobcats possession, I can’t help but wonder if they’re simply not destined to win more than seven games ever again.  They can’t even beat the Lakers anymore, and I’m definitely worried that this is merely the beginning of a 58-game losing streak (currently at 13).

In all seriousness, though… we shouldn’t even be talking about Hendo missing layups and BJ shooting basketballs in the wrong direction.  The Bobcats led by how many points in the third quarter?  Eighteen, I think it was?  Yeah, the Bobcats were up 78-60 at the six-minute timeout.  Credit the Lakers for coming out of that timeout with a new-found intensity at the defensive end (Charlotte scored six points in the rest of the quarter), but man… what a depressing loss.

From a Laker perspective, this fortunate comeback victory is merely more cause for concern, and I think the players recognize that (in all honesty, I’m not sure I’ve ever seen a team appear so unhappy immediately following a win).  Though they got off to a strong, fluid start offensively with Pau (three first-quarter assists) back in the lineup, the sloth-like Spaniard didn’t solve any of the defensive problems.  In the first half alone, Charlotte racked up 12 fast-break points, and 58 points total.  As I said, LA’s defense did intensify later on in the game, but the type of pressure that forced the Bobcats into some extremely ugly turnovers isn’t going to be that effective against better teams.  All in all, it was another up-and-down game for the Lakers where Kobe got hot (9 of his 30 in the fourth), the opposition choked, and their various issues were ultimately prevalent throughout.  Kemba Walker and Ramon Sessions combined for 48 points.  Bismack Biyombo and BJ Mullens racked up 28 rebounds.  These things don’t happen against teams that are good.

Earl “Red” Barron knocked down a cold-blooded jump shot from the top of the key to send the Wizards to overtime against the Hawks (again), but it was former Wizard DeShawn Stevenson who failed to feel his face.  After Barron knocked down another shot from the same spot to give Washington a 93-92 lead with 3:03 to play in OT, Stevenson answered with his first three of the game.  His trip to the stripe on Atlanta’s next possession made it a two-possession game, and that was all she wrote.  DeShawn hadn’t even expected to play (he’s on a regular rest regimen), but when the Wizards made a competitive game of it, Larry Drew’s hand was forced; he inserted Stevenson in the third quarter, and Stevenson delivered 8 points on 3-3.

Jordan Crawford isn’t the first name that comes to mind when you think “triple-double,” but he had the second one of his young career in this losing effort.  Itching for some revenge against the team that sent him to basketball purgatory, Crawford recorded 27 points, 11 rebounds, and 11 assists.  He went 5-10 from three, but, unlike DeShawn Stevenson, failed to rise to the occasion.

Brandon Jennings’ season-high 34 points led the Bucks past the Pacers for the second time this season, 98-93.  I checked on this game midway through the fourth quarter, and I couldn’t help but notice the presence of a bearded, headbanded man.  This man was Drew Gooden, of course; he appeared for four minutes and one second, and although he didn’t do anything (other than get his shot blocked by Sam Young), I thought the simple fact that he played late in a close game was worthy of note.  Samuel Dalembert was available, and he got the DNPCD.

Not all close finishes are good finishes. However, Spurs/Nuggets was a good, close finish.  San Antonio had trailed by as many as 17 in the second half and 14 in the fourth quarter, but they managed to slice Denver’s lead to just three on a Tony Parker triple with four and a half minutes to play.  Beginning with that Parker field goal, the teams traded scores on four consecutive possessions.  The back-and-forth action unfolded in thrilling fashion; Andre Iguodala answered Parker’s jumper with a noisy putback jam… Tim Duncan abused Kenneth Faried in the post and finished with a big dunk of his own… Andre Miller confidently sunk a contested mid-range J.  The Spurs never were able to crest the hill — the Nuggets simply had too many answers — but they definitely made it interesting.  They had three open looks to make it a one-possession game between :24 and :09, but all three rimmed out and Denver held on to win 112-106.

Despite the loss, Tim Duncan had a special outing. With 31 points, 18 rebounds, 6 assists, and 5 blocks, 36-year-old Duncan is just the third player over 30 to have such a game in the last 26 years.  He also reached the 23,000 career points milestone as he knocked down a couple of free throws in the third quarter.  On the season, Duncan is higher up the scoring list (17.6) than Zach Randolph, Al Jefferson, Deron Williams, and Joe Johnson.  Additionally, no one over the age of 31 is matching his production on the boards (10.4).  Statistically, Duncan is playing almost exactly like he was at 33.  Between he and Kobe, we’ve got two guys age 34+ legitimately playing at the level of an MVP candidate.

It’s a little weird to watch a team get out-rebounded by one player for three quarters and not lose the game.  That’s what Miami did against Minnesota yesterday as they took a 103-92 W despite losing the battle of the boards 53-24.  Kevin Love had 9 rebounds in the first quarter alone while the Heat had just 3 (one short of an all-time franchise low).  Love maintained his advantage over Miami’s entire squad through the end of the third quarter, when the count was 16-14 (Love finished with 18).  Despite the Timberwolves’ complete and total dominance of the offensive and defensive glass (and the painted area in general), the Heat led by two at the half, eight through three, and by double digits for most of the fourth.  The three-point shot proved to be more than an equalizer; while the Wolves banged and scrapped for two-point field goals in the lane, the Heat drained 13 of 25 from the great beyond.  Minnesota finished with 37 made baskets to Miami’s 36, but only four of theirs were worth three points.

Alexey Shved has been a good defender for a rookie, but he wasn’t ready to check Dwyane Wade.  As Andrei Kirilenko did a respectable job on LeBron (8-18, 22/6/11), D-Wade went for a game-high 24 on just 14 shots.  The Wolves would’ve been in good shape had they only been able to clone a couple more AK47s; he was very effective at the offensive end as well, scoring a team-high 22.  My main man Nikola Pekovic got off to a beastly start, but his 18 and 12 are tainted by 19 shot attempts and 6 turnovers.  Still, watching him throw his weight around against the undersized Floridians was highly enjoyable.

Reggie Evans almost made a game-tying jump shot that would’ve sent the Nets to OT with the Jazz.  Almost doesn’t help the struggling Nets (2-6 in December), of course, but it made me laugh pretty hard.  Just to see Reggie Evans fire up a short jumper with the game on the line, and to experience that brief moment of hope that it might actually go in… it was definitely one of my favorite moments of an eventful night.  On a more serious note, Joe Johnson should’ve taken that 10-footer over Al Jefferson.  The little step-back move he did before he kicked the ball to CJ Watson appeared to create enough space, and I have no idea why he didn’t put it up.  With just five ticks to go, it was too late to pass up such a good look (the Nets still ended up with a wide-open shot, but Gerald Wallace isn’t exactly Steve Kerr from beyond the arc).

Box Score Observations: Break up the Toronto Craptors!  In beating Cleveland 113-99, Toronto won their third in a row.  Jose Calderon followed up his Sunday triple-double with 23/5/6, and the Craptor bench contributed 59.  Joakim Noah posted an 11/13/10 triple-double as the Bulls defeated the Celtics 100-89.  The Cs have lost five in a row on the road.  Golden State crashed the boards to the tune of 16 offensive rebounds on their way to a 103-96 victory over the Pelicans.  David Lee scored 26 points, but came up one board shy of his eighth consecutive 20/10.  Jarrett Jack and Carl Landry had 16 apiece, making this the second straight game in which they’ve tallied a combined 30+.  OJ Mayo’s 26 helped his Mavs prevail 107-100 in yet another battle with the Sixers, who beat them by two in Philadelphia.

Lowlight Recap, World Peace Edition: Watch Metta ignore Kobe’s demands for the basketball as he dribbles out the shot clock and fires a brick off of the backboard padding…

Highlight Recap, After The Whistle Edition: See, this is why I couldn’t be a ref.  I’d have counted this sh!t and Given Brook Lopez a high-five whilst belting out, “and that’s h!”

Highlight Recap, Everything Else Edition: One of the better dunks of Danilo Gallinari’s career.  Iggy gets a steal, locates Faried.  LeBron wrecks the rim.  Kobe appears from out of nowhere to stuff Bismack Biyombo.  Alonzo Gee swats Valanciunas from behind and advances the ball to Dion Waiters for a jam.  Gee gets toasted by DeMaR DeRoZaN, who finished with authority.  Alexey Shved finds his countryman Andrei Kirilenko on the break.  One of Jordan Crawford’s many passes.  David Lee makes a slick dish to Festus Ezili.  Colonel Sanders rises for a putback jam.  Anthony Davis doesn’t care if he keeps it in bounds.  Neither does Joel Anthony.