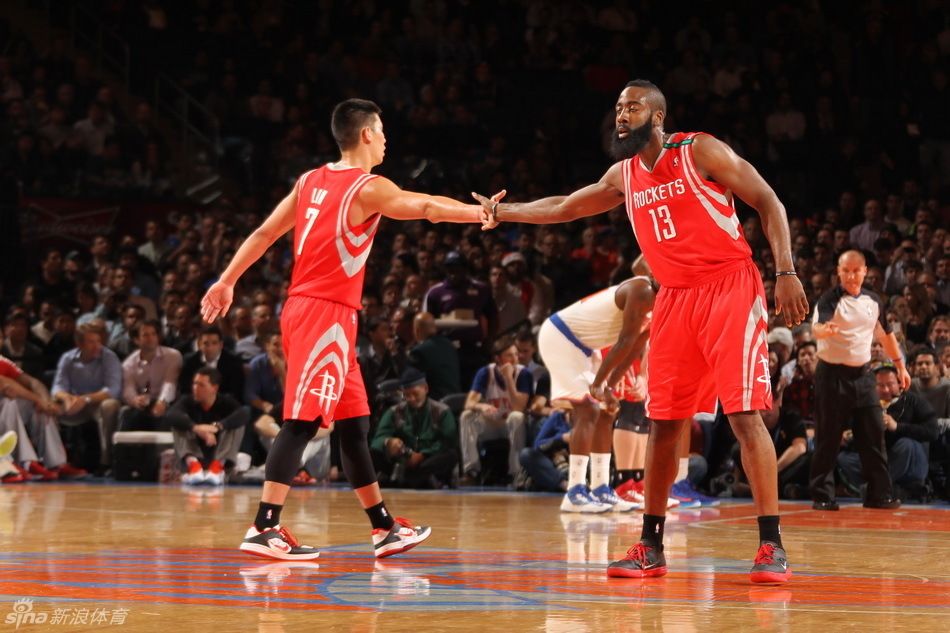 Well, New York, at least there’s this: if you have to play Houston again this season it means you’ve made it to the Finals.  With a 96-109 loss on Monday (and it was worse than the score makes it out to be; the deficit was 22 with five minutes to go), the Knicks have fallen victim to the Rockets twice — both times by double digits — in less than a month.  Jeremy Lin’s 22 points and 8 assists only make New York’s first home loss of the year that much harder to swallow.  So… exactly what happened?  Well, things really went south for the Knicks when they were outscored 27-11 in the second quarter.  The turning point was when JR Smith picked up his second foul at the 52-second mark of the first.  Between then and when he checked back in with 6:58 to go in the second, New York was only able to put four points on the board.  Smith had made his first five shots in a row, propelling his team in the early going.  Without Carmelo, the Knicks needed him in the game.

Then there were the defensive issues, obviously.  The Rockets put up 109 points, shot 51.3%, and achieved a 25-10 edge on the fast break.  James Harden (28), Jeremy Lin (22), and Carlos Delfino (16) scored 66 points themselves.  If you watch the full highlights of the game you’ll notice how easily the Rockets were able to penetrate the Knicks’ defense and how little opposition they faced at the front of the rim.  Great spacing of the floor on the part of the Rockets had a lot to do with their success, but so did a poor New York effort.  Tyson Chandler’s hard foul on Jeremy Lin basically represents their entire night of defensive resistance (the Knicks blocked a whopping TWO shots), and even that resulted in Rockets points.

With all of this having been said, let’s not be getting carried away in regards to the big picture.  I’d bet my life savings that if I turned on ESPN right now Skipper and Screamin’ A would be debating whether or not the Knicks made a mistake in letting Jeremy Lin go this summer, with Lin’s 22-point performance being the basis of the question.  I’m not trying to knock Jeremy Lin, but it’s one game.  I’m happy for the kid because he’s had a rough season, but he could’ve had 100 points… if he can’t sustain it, it doesn’t mean jack.  Thus far, he hasn’t been able to sustain anything but a sub-.400 shooting percentage and an unimpressive assist-to-turnover ratio.  Despite his poor showings against Houston, Ray Felton remains the better player of the two, and his composure will benefit the Knicks as they compete into the second round (and possibly beyond).

Dare I say Lamar Odom is making progress? He grabbed 11 boards off the bench in the Clippers’ 88-76 victory over the Pistons, and he tacked on 6 points and a pair of blocked shots for good measure.  One of his two field goals was a strong layup where he powered up through a Piston defender.  After he made it, Lamar enthusiastically yelled, “AND ONE!!”  Granted, it was just one play… but for a moment there it was almost as if he actually gave a f@ck.  It really caught me off guard… but then I noticed that he just generally looks a bit better than he did earlier in the season.  He definitely appears to be slimmer, more mobile, more energetic… sh!t, I think he’s improving!

This was the Clipps’ 10th consecutive win, which is just one shy of a franchise record set way back when they were Bob McAdoo’s Buffalo Braves.  With road games against the lowly Hornets and Kings on the horizon, one would think they’d surpass the old standard with ease… but they are the Clippers, and they do tend to suffer a disappointing loss from time to time.  Hell, they put themselves at risk against Detroit; the Pistons were within single-digits until the latter part of the fourth quarter, and 88 points are the fewest the Clipps have scored in a win this season.  It wasn’t until the game’s very end that things got a little out of hand.

The Orlando Magic are just two games under .500 (11-13). In an impressive turnaround, they came back from down 15 in the second half to beat the T-Wolves 102-93 on Monday night.  Nikola Pekovic had dominated early, literally ripping down his own offensive rebounds between throngs of Magic defenders before tossing the ball back up at the rim as many times as it took him to get it in.  Pek finished the first quarter with 11 points and 6 boards, and solid efforts from the likes of Kevin Love, Luke Ridnour, and Andrei Kirilenko contributed to a 61-49 halftime lead.  Minnesota had ended the second quarter on an absolute roll — a 12-0 run that culminated in a buzzer-beating Kevin Love three — and their advantage continued to grow marginally into the middle part of the third.  Then, suddenly, the Timberwolves couldn’t buy a basket.  Orlando kicked it up a notch on defense, moving their feet on the perimeter and contesting every shot in the paint, and their efforts ultimately led to a dominant stretch that began with 5:16 to go in the third.  By getting out in transition and pounding the ball into the paint, the Magic outscored the Wolves 41-23 in the final 17 minutes and change.  While Minnesota’s offense sputtered, it was their defense that really, really failed them.  I ran out of fingers to count the number of times that Big Baby beat everyone up the floor for easy layups (and even a dunk or two), and that’s obviously unacceptable.  Davis finished with 28 points, just one short of his season high.

Ricky Rubio struggled in his second game back. He had three turnovers to four assists and finished 0-3 from the floor, but he did have this one awesome bounce pass to Kevin Love…

Just how much do the Kings suck? Enough to blow a 19-point lead to the Phoenix Suns (who got a career-high 10 assists from apparent-point-forward Luis Scola) and lose 101-90.  Marcin Gortat absolutely destroyed DeMarcus Cousins.  The Polish Hammer had a 14-point, 13-rebound double-double with 6 blocked shots while Cousins scored his 9 points on 1-10 from the floor and threw in 3 turnovers and 4 fouls.  Rather than take credit for his domination of DumbArcus, Marcin questioned Cousins’ desire to compete.  “Quite honestly, I don’t think he wanted to play,” said Gortat.  It’s the second time an opposing player has come out and criticized Cousins’ mentality in the past week or so.  I honestly believe the Kings are going to become fed up with this kid sooner rather than later.  He’s talented, but he’s shown no added maturity or development in his leadership abilities.  As of now, his numbers are actually significantly worse that last season, and the Kings aren’t any better either.  In his third year, we’re approaching the point where people must realize that DumbArcus is what he is… and what he is is a loser.  Plain and simple.

Props to Jimmer Fredette, who scored a career-high 22 points in the same number of minutes.  It wasn’t his fault.  I’ve been critical of Jimmer in the past, particularly in regards to his ability to create on the NBA level… but he’s looked pretty good when he’s been on the floor this season (47% from the floor, 40% from three).  Observe his highlights and note the series of individual moves that he put on reputed defender PJ Tucker…

Box Score Observations: Serge Ibaka didn’t “run up” on Stephen Jackson in Oklahoma City’s 107-93 triumph over the Spurs, but he did set new career highs with 25 points and 17 rebounds.  Jackson returned from a broken finger, played 19 minutes, and refrained from “goin’ in [anyone's] mouth.”  The Thunder have won 11 in a row and are now 20-4.  Zach Randolph ripped 7 of 18 Grizzly z-bounds as Memphis beat Chicago 80-71.  Wayne Ellington went 3-4 from downtown and Mike Conley scored a team-high 17 points.