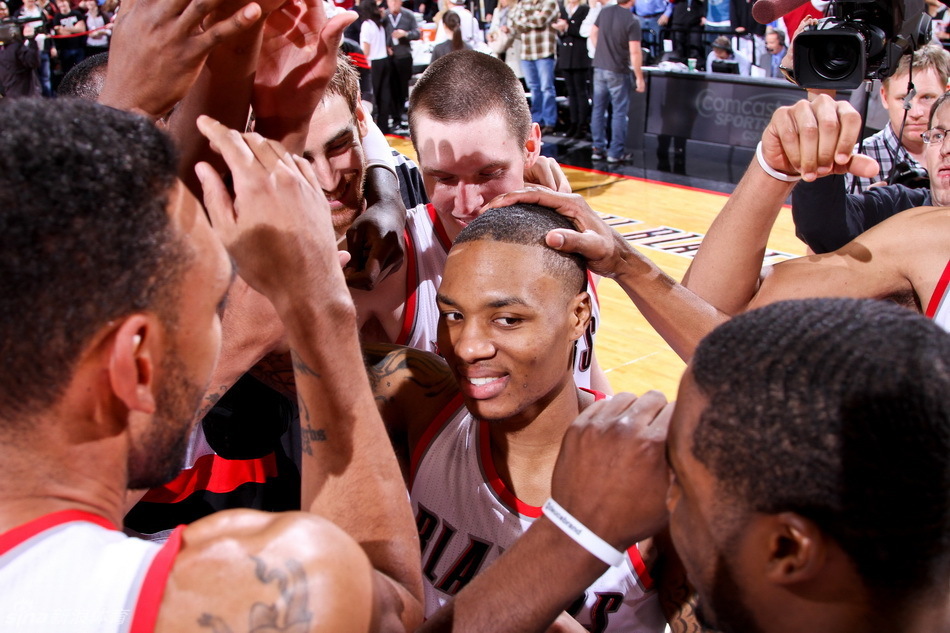 Blazers 95, Pelicans 94
***The afterthought of the weekend turned into a gem of historical proportions.  While you were watching the officials dole out 38-yard penalties on Sunday Night Football, Nicolas Batum was busy putting together the first 5×5 since 2006.  With his unbelievable line of 11 points, 5 rebounds, 10 assists, 5 blocks, and 5 steals, Batum becomes one of eight players to record a 5×5 since 1985.  He also becomes the first player to have 5 blocks and 10 assists in the same game since Jamaal Tinsley did it as a rookie in 2001.  Batum grabbed his final rebound with just 1:16 to spare, and I don’t think he understood what was going on because he wasn’t really hitting the boards at all (absolutely no Blatcheing from Batum).  Luckily, an arrant shot simply bounced his way.
***Despite Batum’s individual brilliance, the Blazers nearly blew a 16-point lead.  Ryan Anderson (26 points) and Greivis Vasquez (23 points) led the Pelicans as they came storming back in the fourth quarter.  Austin Rivers knocked down a long three-pointer from straightaway to tie it up with 50 seconds to go, but Damian Lillard wasn’t about to let some other rookie steal his shine…

Good thought, Monty, except the Trent Tucker rule actually states that only 0.3 seconds are needed in order for a catch-and-shoot scenario to take place.  Also, how exactly can you work on the execution of a lob play when the opposition is more than happy to cede any type of two-point basket?  That’s not even good practice.
***JJ Hickson’s 24 points and 16 rebounds represent his fifth straight double-double.  This guy was waived by the Kings, folks, and he currently ranks seventh in the NBA in rebounding (DeMarcus Cousins is 12th).

Nuggets 122, Kings 97
***I would’ve skipped this game, but the score is far too funny not to list.  Also, I’d like to discuss Keith Smart’s sparing use of Thomas Robinson.  Robinson is Smart’s youngest player, and the fifth-overall pick from last June’s draft.  The Kings are obviously undergoing a total rebuild — a long and painful one, I might add — yet Robinson is averaging just 16 minutes per game, the fewest amongst all rookies selected in the top 10.  On Sunday, Robinson played 15 minutes, right around his average.  I thought it was strange, however, that in a game in which Sacramento trailed by 20 in the second quarter, Robinson checked in for the first time at the 3:57 mark of the third.  The Kings were down 28 at that point, and Robinson was their only active player who hadn’t yet seen the floor.  That to me makes very little sense, as this certainly seemed like the ideal situation to deploy a 21-year-old who could use some experience.   Instead, Kieth Smart elected to sit the kid until Denver was so deep into its roster that nothing Robinson could’ve done would’ve been impressive anyway.  No need to be playing DumbArcus Cousins for 32 minutes and 34 seconds in a 25-point loss, Keith.

Lakers 111, Sixers 98
***In the midst of a two-game win streak, the LA Lakers are back on the path to title contention!  Okay, maybe not… but wins are wins, and Mike D’Antoni must’ve been pleased to see his team put up 111 points.  Kobe dropped a game-high 34, which means he’s gone for 30+ in two straight Laker victories.
***KWAMAY BROWN did a really solid job defending Dwight Howard.  Dwight finished with 17 points, but he took 13 shots, turned the ball over five times, and attempted just three free throws.  He also got one of his hook shots tossed back to Los Angeles.

Kwame is actually one of the league’s better individual defenders at his position, so it doesn’t surprise me that he was able to contain Howard; still wanted to bring it up, though, ’cause Kwame gets what little credit he’s due exactly nowhere else on the internet.

Raptors 103, Rockets 96
***‘Twas a tie game at halftime, but that was before the Ed Davis dunk-a-thon began.  Davis threw down four jams in the third quarter, accounting for 8 of his 13 points in the period.  Just when you thought sh!t couldn’t get any less normal, Alan Anderson played a major role in sealing the deal for the Raps by scoring 14 of his career-high 24 in the fourth.  Davis and Anderson, who average a combined 16 points, tallied 37 in the game.  This seems like an appropriate time to mention that the Rockets are 30th in the league in points allowed.
***Jose Calderon, who assisted on most of Davis’s slams, recorded the second triple-double of his eight-year career.  Calderon finished with 18/10/14 to Jeremy Lin/Tony Douglas’s combined 12/4/3.  Toronto isn’t the right situation for Calderon, but the man still gets the job done.
***The league had Joey Crawford AND Violet Palmer calling this game.  As you can imagine, a few sketchy calls were made down the stretch, mostly having to do with block/charge situations.

Clippers 111, Bucks 85
***This entire game was basically a perpetual Clipper fast break.  They literally racked up 31 points in transition, which has to be a season high (they lead the damn league at an average of 18.1).  Observe…

***Joel Przybilla got ejected for throwing the ball at a referee.  As far as Vanilla Gorilla attacks go, this one was pretty tame.

Bulls 83, Nets 82
***The Nets blew a six-point lead by failing to make a basket in the final 5:42 (with the exception of an inconsequential Deron Williams three that came at the buzzer).  Marco Belinelli (19 points) scored the go-ahead bucket with 22 seconds to play as he drove from outside the arc all the way to the front of the rim.  Notice how CJ Watson and Brook Lopez ended up running into each other in their attempt to cover the screen-and-roll, and how slowly Gerald Wallace and Joe Johnson rotated from the corners.  Ladies and gentlemen, how NOT to play defense.
***Nate Robinson and Gerald Wallace each threw block parties.

Timberwolves 114, Mavericks 106 (OT)
***Ricky Rubio’s return went absolutely swimmingly. Rubio recorded 9 assists to 2 turnovers in 18 minutes off the bench.  He would’ve finished with 11 dimes had Derrick Williams been able to make a f@cking shot, but no matter… Greg Stiemsma was up to the task.

***For much of the game, Chris Kaveman did a pretty good job keeping Nikola Pekovic away from the rim.  However, Pekovic eventually wore the Mavs down and finished with a game-high 21 points.  Observe his dominance in the 12-4 overtime.
***If Derek Fisher isn’t warned for his blatant flop that drew a crucial late-game foul on Ricky Rubio… I’ll be angry.  But not surprised.  Floppy Fish has always been/will always be treated with leniency despite the fact that he blows.

Knicks 103, Cavaliers 102
***Kyrie Irving suffered a small fracture to his jaw bone on Friday, but he wasn’t about to let that keep him from playing — and dominating — on Saturday.  According to Cleveland’s television commentators, the medical staff essentially pulled off a miracle of technology by preparing a mask for Irving in a window of less than 24 hours.  Irving caught a last-minute commercial flight to New York, where he donned his Dark Knight disguise and nearly saved the day, bringing the Cavs to within one after they’d trailed by as many as 10.  It’s a damn shame that Anderson Varejao split a pair of free throws that would’ve sent this game to OT, ’cause Kyrie had caught fire.  He scored 10 points in the last 55 seconds of regulation (!!!), 17 in the fourth quarter, 41 in the game (career high), and there’s little doubt in my mind that he would’ve gone for 50+ had five extra minutes been played.

Mark my words: as soon as someone puts a respectable supporting cast around this young man, he’s an MVP candidate.  He’s that good.

Magic 107, Bobcats 98
***The Bobcats, who won 7 of their first 12, have lost 11 in a row.  Good thing they play the Lakers next.  Remember, even when the Lakers used to beat all the other teams, they never beat the Bobcats.  Despite having won a total of 14 games over the past two seasons, Charlotte remains 8-7 all-time against the Lakers.

Warriors 115, Hawks 93
***Many, including myself, expected this to be one of the games of the week.  To say it didn’t really pan out would be an understatement.  In the second quarter, Golden State got hotter than the Mojave Desert from downtown.  They sunk five threes in the period, turning a tie game into a 13-point affair at the half.  Harrison Barnes was the guy who was really on fire; he had 19 points and knocked down 3 of Golden State’s 10 triples on just 4 tries.
***Josh Smith has been playing improved basketball, but this was probably his worst game of the year.  Smith scored three points on 1-12 and turned the ball over three times.  He blocked a shot or two, but that was it.
***Ivan Johnson sighting: 15 points and 9 boards off the bench for everyone’s favorite Hawk.  Both benches actually played well.  Johnson and Lou Williams produced 31 points for Atlanta while Jarrett Jack and Carl Landry contributed 32 for Golden State.  It was Steph Curry outplaying Jeff Teague, Josh Smith failing to show up, and the three-point shooting that made the difference.