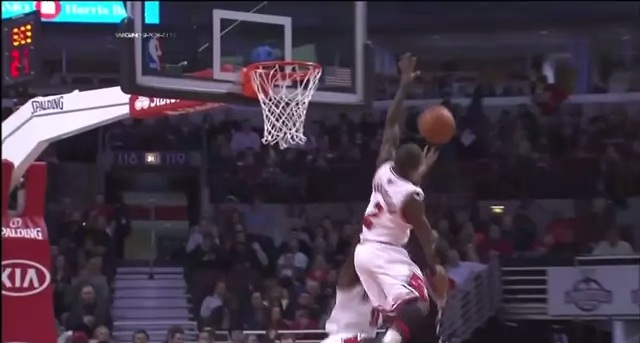 According to Wikipedia’s list of the shortest NBA players of all-time, only 12 players in the history of the league have been shorter than Nate Robinson.  Depending on the accuracy of his 5’9″ listing, the actual number could be even fewer.  Fortunately for Nate, what he lacks in height is more than made up for by the otherworldly athleticism that has made him a 17-point scorer and three-time Slam Dunk Champion.  At the NBA draft combine, Robinson posted a ridiculous max vertical of 43.5 inches.  Though he’s not exactly known for his defense, this remarkable leaping ability makes him a threat to do the spectacular at both ends of the floor.  Nate had 25 career blocks prior to Chicago’s comeback victory over Brooklyn on Saturday, and you can go ahead and make it 26…

Impressive!  I think I prefer JaVale McGee’s… whatever you want to call what he did to Zach Randolph’s jumper on Friday, but I’m gonna say this block by Nate is the second best rejection of the season so far.

What’s most remarkable about this play to me, though, is that it’s absolutely spectacular, yet it might not be a top three swat of Robinson’s career.  Remember his blocks on Yao, Shaq, Chris Bosh, and Javaris Crittenton?  For being five feet and change, Nate Rob is a shot-blocking machine!

One Response to Nate Robinson Gets Up, Swats MarShon Brooks