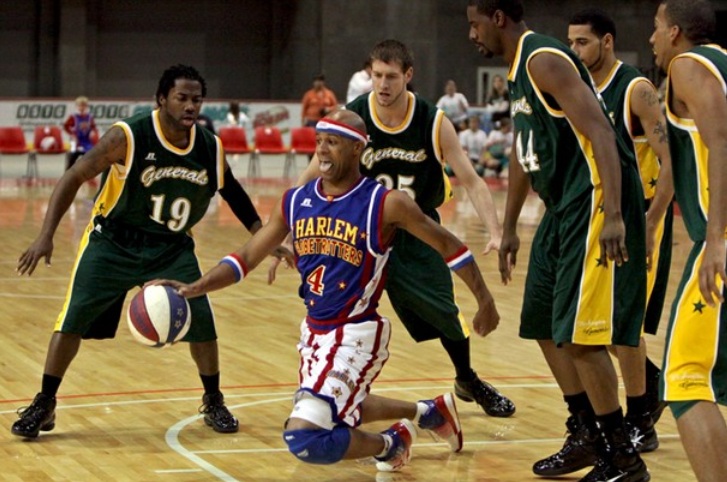 Lakers win! With some help from the Washington Generals, the Lakers got their 10th victory of the season and snapped a four-game losing streak.  In all honesty, the Lakers didn’t really play that well… rather, the Generals kind of beat themselves.  Despite a mere two-point deficit at the end of the first quarter, Washington was already on pace to commit 36 turnovers.  They only ended up committing 19, but that’s still far too many, especially when you shoot less than 30% in the second half.

Cartier Martin helped the Generals kick around early. Martin checked in with about two minutes to go in the first and immediately got down to business, knocking down five consecutive field goals during a 23-7 Washington run that made it 41-32 Generals at the 7:35 mark of the second.  Unfortunately, Martin cooled off as quickly as he’d heated up; he missed his next five shots and the Lakers put together a 26-14 run of their own to take a three-point lead at the half.  LA’s surge was sparked by two of the sorriest General turnovers of the evening.  First, Nene lost the ball as he dribbled it aimlessly on the perimeter, and then Kevin Seraphin tried the dumbest, most nonsensical cross-court pass I’ve ever seen.  Jodie Meeks scored 5 of his 24 points off of those miscues, tying the score at 49.

Speaking of Jodie Meeks… the Generals must not be aware of his three-point shooting prowess.  Meeks was allowed free reign on the perimeter for much of the night, so he simply fired and filled it up until he had his aforementioned 24 points.  He finished 4-7 from downtown and 9-14 overall.  Kobe Bryant was the game’s leading scorer with 30, but it took him 29 shots to get there.  He also duped Violet Palmer with a fineable flop at a key juncture in the fourth quarter.  Unfortunately, Kobe probably won’t be cited and Palmer definitely won’t get fired.

Robert Sacre got nearly 16 minutes of burn as Jordan Hill missed this game with back spasms.  Sacre contributed four points and four rebounds.  He looked pretty excited when he threw down an early slam dunk in front of the Laker bench, but not one of his teammates jumped up to celebrate.  Does this not make the 2012/13 Los Angeles Lakers the most insufferable group of douchewads ever assembled?  I mean, how are you not going to get up and wave a towel for this man?  He’s been doing it for your sorry, 10-14 asses all season long.  To simply stand up and clap… it’s the least the rest of the Lakers could’ve done, yet they couldn’t even muster the energy.  F@cking despicable little b!tches these Lakers are for not celebrating Robert Sacre’s dunk as vigorously as he would’ve celebrated theirs.

Washington’s bench outscored their starters 58-38. Nene came off the bench, so that’s part of it… but Jordan Crawford, Bradley Beal, Chris Singleton, and Emeka Okafor combined to go a pathetic 9-34 from the floor.  Martell Webster was the only starter who played well… he dropped 17 points and finished a monster alley-oop jam.

Signs of life from Roy Hibbert: Against the Sixers, Hibbs scored eight early points on a couple of strong defenders in Kwame Brown and Lavoy Allen.  He finished with 19 points, 13 rebounds, and a block on 9-16 from the floor as the Pacemakers picked up a 95-85 W (both Indy and Philly are now 12-11 on the season).  Paul George took game-high scoring honors with 28.  George has exploded over the past week or so… he’s posted consecutive games of 32, 22, 22, 17, 27, and 28 points.  Factor in the zero-point game that directly preceded his incredible stretch and he’s still averaging over 21 PPG in the month of December.  Encouragingly, George’s shot attempts are up 2.5 per game from November, but his three-point attempts have remained the same.  He’s been in attack-mode more frequently, and with his athleticism that’s the only mode to be in.

The Nets snapped a four-game home losing streak by beating the Pistons in Brooklyn.  It took a vintage performance from Gerald Wallace, two overtimes, and a buzzer-beating game winner from Joe Johnson, but they did it.

With a game-high 28 points to go along with his game-winner, JJ was definitely the hero… but he and his Nets would’ve been up sh!t creek without a paddle had Gerald Wallace not covered every last inch of the Barcalys Center’s herringbone hardwood.  At one point or another, Wallace was literally everywhere; he finished with 25 points, 10 rebounds, 2 steals and 2 blocks.  He had made some crucial hustle plays down the stretch, including a monster block in overtime and the game-tying tip shot that forced the extra period.  His highlights can be viewed here.

There are so-called “no-look” passes, and then there are passes where the passer literally never looks.  This ridiculously-awesome, backwards heave by CJ Watson is a fine example of the latter…

The Pepsi Center was the house of highlights as the Nuggets edged the Grizzlies 99-94.  Spectacular play tends to take a backseat to practicality down the stretch, but Denver seemed to get flashier and flashier as they successfully closed out a tough Memphis team.  Danilo Gallinari got sh!t started by passing to himself, then JaVale McGee made me forget all about that by snatching a Zach Randolph jump shot right out of the air.  Even later, Andre Iguodala sealed the deal as he took off from outside the dotted line for a monster one-hander.  Iggy led the Nuggets with 20 points, and he took just 11 shots to get there.  Andre Miller contributed 18 off the bench.  Jerryd Bayless, not known for his passing ability, recorded 11 assists in 17 minutes for the Grizz.

Have a look at Isaiah Thomas’s fourth quarter shot chart… 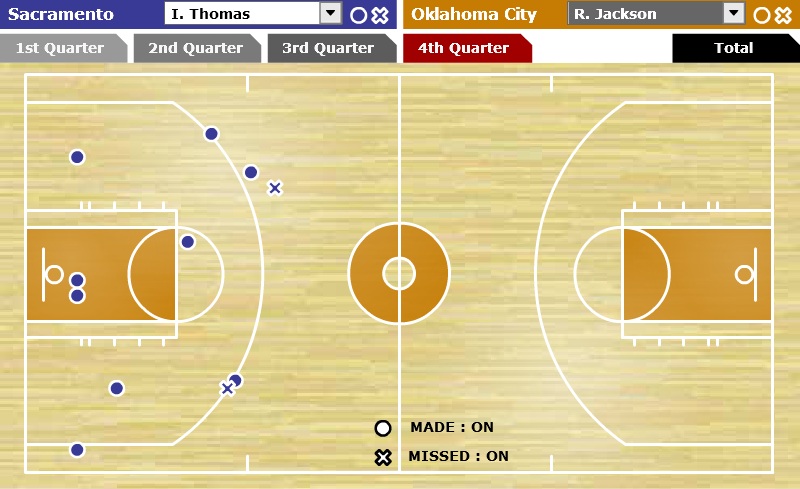 The Kings trailed the Thunder by 20+ in the fourth and ultimately went on to lose by 10, so Thomas’s remarkable, 23-point quarter was completely inconsequential… but it’s still impressive.  Remember how incredibly hot Carmelo Anthony appeared in the first quarter on Thursday night against the Lakers?  Yeah, well, he only scored 22.  For the winners, Kevin Durant dropped 31.  On 14 shots.

The West didn’t fare so well against the East tonight. Though the Lakers and Rockets beat the Generals and Celtics, the Warriors and Mavericks lost to the Magic and Craptors.  Golden State was on a five-game win streak and had just knocked off the Heat in Miami, but Nikola Vucevic pissed all over that parade.  The Warriors, who have hung their hat on improved board work this season, gave up 17 rebounds to Vucevic as part of a 53-49 margin that went in favor of Orlando.  JJ Redick’s 16 points led the way for the Magic, who won by a final score of 99-85.

As for the Mavs, they also got creamed.  OJ Mayo was a no-show (10 points) and former Craptor Vince Quitter a non-factor (1-8) as Toronto defeated Dallas 95-74.  Of the few wins the Craptors have this season, this one obviously had the largest margin.  Linas Kleiza bopped five triples off the bench, but the real story was rookie Terrence Ross, who had 18 points and can f@cking fly.

My main man Nikola Pekovic scored a career-high 31 points as the Wolves enjoyed a Pelican feast.  Pekovic easily and repeatedly established deep post position, regularly catching the ball around the restricted area.  In a refreshing display of playing to one’s strengths, Pek took 17 of his 18 attempts from inside the painted area.  That’s why I love Nikola Pekovic — the man knows what he does well and he sticks to it.

Box Score Observations: Houston’s Greg Smith made 8 of 9 shots as he scored 20 points off the bench to help the Rockets beat the Celtics 101-89.  Monta Ellis dropped a season high of 33 in a 90-86 Bucks victory at Cleveland.  Jared Dudley had 22 in Phoenix’s 99-84 triumph over Utah.  Brook Lopez made his return from injury for the Nets, recording 9/4 in 24 minutes.  Andray Blatche went back to the bench, but he still scored in double figures (16) for the 9th straight game.  Austin Rivers, a 35% shooter, knocked down 9 of 14 from the floor as he scored a career-high 27 points.