The Starting Lineup: LeBron vs DeShawn, Round 41 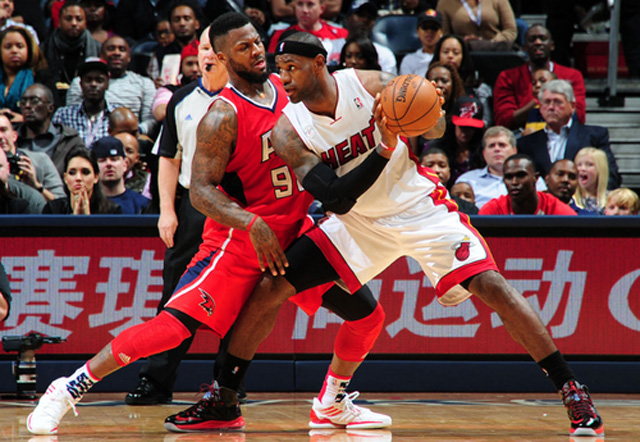 Round 41* of LeBron vs DeShawn goes to The King in a unanimous decision.  Stevenson, to his credit, did make the bout much more competitive than most analysts expected with some surprising offensive contributions.  He drained four triples in the first half, nearly matching LeBron’s 16 early points with 12 of his own.  However, Stevenson’s impact became limited down the stretch as he was unable to find the range following the break.  He missed on all four of his second-half shot attempts and wasn’t able to make a difference defensively with Josh Smith guarding James.  Meanwhile, the reigning MVP tacked another 11 points onto his total (27) as he led his Heat to a 101-92 victory.  No shenanigans took place.

Josh Smith was 4-4 from three at one point in this game. He finished 4-5, making him 11 for his last 16.  I haven’t really bought into any of the Mayan Doomsday theories, but Josh Smith going 4-5 from three… I mean, he still shot an air ball, but Josh Smith went 4-5 from thee in a game where Jesus f@cking Shuttlesworth finished 0-3.  That’s a little bit scary to me.

Without Nic Batum and Wes Matthews (who missed the first game of his career), Portland set an all-time three-point futility record by missing all 20 of their attempts from range.  Still, they beat the Craptors by 18 (92-74).  Having lost Andrea Bargnani, one of their few offensive threats, to an elbow injury just eight minutes into the game, Toronto struggled to put points on the board in the second half.  The Blazers had their share of issues as well, but LaMarcus Aldridge and JJ Hickson dominated the painted area, recording a combined total of 46 points and 23 rebounds.  The Craptors may have fared a little better had they not lost a second prominent frontcourtsman in Amir Johnson, who got himself tossed for the strangest of reasons…

After the game, Johnson told reporters he likes to rub the ball after every free throw.  The ref wasn’t allowing him to do so, which rendered Johnson temporarily insane.  Whatever the case may be, I think Amir definitely crossed the line when he got up in the referee’s face and refused to back off.  Then he obviously crossed it again when he chucked his mouthpiece.  Clearly, Amir is a habitual line stepper and should be slapped by Charlie Murphy.  Just kidding, but seriously… he should probably be on the lookout a league citation in his mailbox.  Merry Christmas!

Sacramento’s Fransisco Garcia was the anti-Blazer, knocking down a career-high seven threes in a 96-119 loss to Dallas.  The Kings made 12 triples in all, but that wasn’t enough to offset their 19 turnovers and 62% free-throw shooting.  The Mavericks scored 65 points in the first half and garbage time was well underway about two minutes into the second quarter.  Fortunately, that was right about the time when Dirk Nowitzki joined Dallas’ broadcast team and spiced sh!t up a little bit.  He jokingly taunted the Kings and called OJ Mayo by his given name, O’Vinton, which was pretty funny… but after that the game got so boring it put me to sleep — literally.  I didn’t wake up until the second quarter of Blazers/Craptors.

James Harden’s absence caused all-out Linsanity in Houston. Not only did Jeremy score a season high on Monday night, but he matched his career high with 38 points.  Unfortunately for H-Town, their basketball team suffered the same losing fate as their football team, falling to San Antonio 126-134 in an overtime shootout.  Tony Parker may not have been able to contain Lin, but he had a hell of an offensive game himself.  Tony P knocked down 9 of 18 shots on his way to a 27/12/12 triple-double.  Manu Ginobili chipped in 22 off the bench and Gary Neal went off for 29.  Neal was on fire from the perimeter… he scored 21 of his points by virtue of 7-10 three-point shooting.  The basket that sent the game to overtime was a 15-foot bank shot by Omer Asik, who exploded for a career-high 21 points.  See him here, artfully soaring to the basket with the utmost finesse.

The Bobcats have begun to play some stiffer competition, and they’re struggling mightily.  In falling to the Warriors 96-104 on Monday, the Bobcats lost their 8th consecutive game.  They haven’t won since November 24th, which happened to be the night that they matched their win total from last season.  Now 7-13, the ‘Cats face a back-to-back with the Clippers and Hawks beginning on Wednesday.  Yikes.

As for the Warriors, they’re headed in the opposite direction. Golden State extended their win streak to four with the victory over Charlotte, leaving them just a half game behind the Clippers in the Pacific.  The Warriors have made the turnaround on the glass, where they currently rank sixth** in the league.  Keep in mind that they were dead last a season ago, and that Andrew Bogut hasn’t really played yet.  I’m not at all surprised that a healthy Stephen Curry, an older Klay Thompson, and the additions of Jarrett Jack and Carl Landry have made the Dubs a better team, but if you had approached me in October and told me they’d be controlling the glass on a nightly basis without the help of Bogut I would’ve called you a goddamn fool.  Credit David Lee, who’s been ripping over 11 a game.  He finished with precisely that amount against the Bobcats and threw in 25 points to boot.  Lee is currently working on a streak of four consecutive 20/10s and is without a doubt playing the best ball of his NBA career.  If he can keep it up through January he’ll be a bona fide All-Star.

Box Score Observations: MKG had 17/7/3 in Charlotte’s aforementioned loss to Golden State.  Brandon Knight’s 22 weren’t enough to propel the Pistons past the Sixers, who got 25/5/8 from Jrue Holiday.  Dwyane Wade had an incredible shooting night against Atlanta, connecting on 11 of his 13 shots (26 PTS).  OJ Mayo converted three more triples on just four tries, keeping him above 50% from range on the season (extremely impressive considering that his 115 attempts are 8th most in the league).

Highlight Recap, LeBron James Edition: LBJ came through with the left, then shut it down with the right…

*This really was LeBron’s 41st game against DeShawn Stevenson.  I went back and counted, because that’s the sort of dedication we here at NBA247365.COM like to display.

**The Warriors have played all five teams that lead them in total rebounds.  They’ve out-rebounded each of those opponents on at least one occasion.  To me, this indicates that what we’ve seen from Golden State is not a fluke.  Confusing as sh!t, but not a fluke.