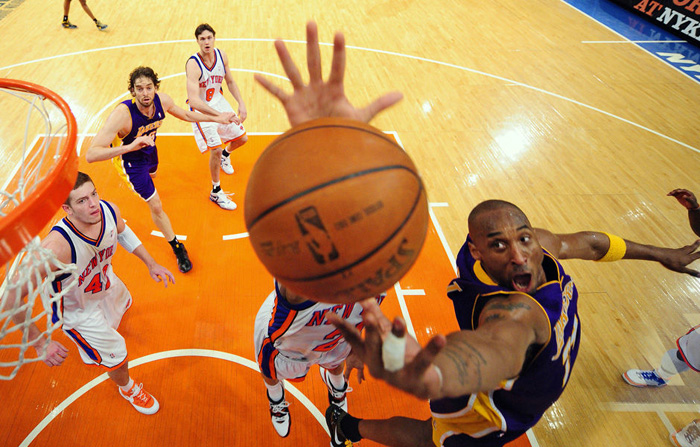 Monday, December 10th: Hawks @ Heat, 7:30 ET, NBALP: The Heat almost never lose at home, but the Hawks have been great on the road (5-2) and have also won 9 of their last 10 games overall.  They just knocked off the Grizzlies in Memphis and appear poised to put up a strong fight in Miami.  In addition, this will be the 41st round of LeBron vs DeShawn.  Wouldn’t wanna miss that.

Tuesday, December 11th: Lakers @ Cavaliers, 7:00 ET, NBALP: The obvious choice here is the sequel to Battle of the Boroughs, and I’d have chosen that game if it was being played at Madison Square Garden.  However, we’ve already seen Nets/Knicks at Barclays, and I don’t think there’s a more intriguing storyline in the league right now than the one that’s playing out in LA.  D’Antoni’s Lakers can’t beat anybody, it’s funny, and as long as this game stays within 10 points or so then I’m gonna be watching.  Also, Kyrie Irving is back… so that’s a huge plus.

Wednesday, December 12th: Mavericks @ Celtics, 8:00 ET, ESPN: Neither the Celtics nor the Mavericks have been good, but they haven’t been bad.  I simply feel like these are two evenly matched teams at the moment, and they ought to give us a pretty competitive game.  Rajon Rondo figures to destroy Derek Fisher, so that’ll be fun.

Thursday, December 13th: Lakers @ Knicks, 8:00 ET, TNT: When’s the last time the Knicks were legitimate favorites in any type of game against the Lakers?  The ’90s?  In a sense, this meeting has historical significance.  Expect underdog Kobe Bryant to take no fewer than 25 shots in the mecca.

Friday, December 14th: Bucks @ Cavaliers, 7:30 ET, NBALP: I always roll with this match up because it’s such a thrill to watch Kyrie Irving and Brandon Jennings handle the ball.  Kyrie got the best of Brandon last time the two battled, but it ended up a tight finish and a Bucks victory thanks to the three-point marksmanship of Mike Dunleavy Jr.  Watching Larry Sanders and Anderson Varejao battle tooth and nail for every loose ball should be interesting.

Saturday, December 15th: Grizzlies @ Jazz, 9:00 ET, NBALP: Everyone knows the Grizzlies have been fantastic, but the Jazz have been playing pretty well too.  Quietly, they’ve improved to 12-10, good for 6th in the Western Conference.  Come Saturday, I expect nothing less than a dogfight between two of the the NBA’s biggest, most physical squads, and it will take place in one of the league’s most hostile environments.  The Jazz are 8-1 in Salt Lake City thus far and the fans will surely be looking forward to the prospect of knocking off a top-notch opponent.

Sunday, December 16th: Nuggets @ Kings, 6:00 ET, NBALP: I don’t think I really like anything the schedule has to offer on this particular day, but a choice must be made.  While the Nuggets aren’t the League Pass sensation that they used to be, the Kings have a way of bringing out the best in their opponents.  If Denver can build a large enough lead, JaVale McGee just might get an opportunity to do some hotdogging.