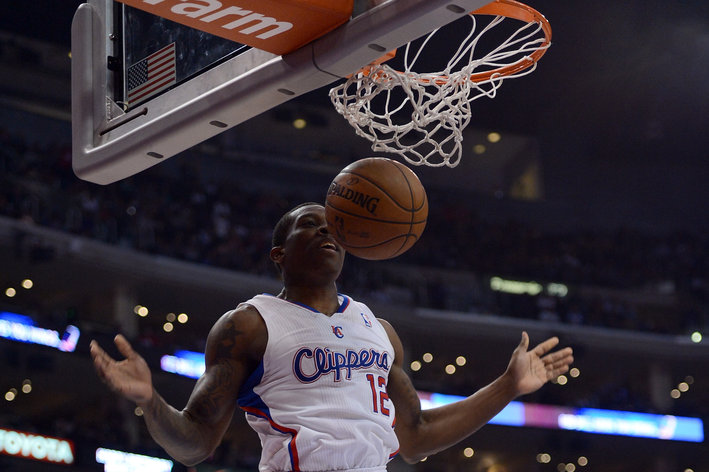 Clippers 117, Suns 99
***Blake Griffin played like a rookie in the first half, and I say that in the most complimentary of ways.  He was energized and aggressive against the undersized Suns, matching his season scoring average with 18 first-half points.  He ended up finishing with a routine 24, but his slowdown can be attributed to a lack of playing time.  Griffin didn’t see the floor for a single second in the fourth quarter (nor did any other Clipper starter), but LA still held Phoenix to a mere 16 points (keep this number in mind) and ran away with an easy victory.  Credit Jamal Crawford and Eric Bledsoe, who scored 23 of their 31 in the final 12 minutes.
***Markieff Morris did not dunk on DeAndre Jordan.  Not at all.  And it wasn’t because he didn’t try.

***Phoenix’s bench actually performed pretty well — Luis Scola had 18, Michael Beasley had 21, and the unit as a whole scored 45.  It was the starters who shat the bed (18-43 FG)… which is kind of ironic considering that the bench was the starters about a week ago.  When it rains it pours, I guess.

***San Antonio’s 19 three-pointers made represent a franchise record.  They drilled 7 of ‘em in the first 11 minutes of the game.

Celtics 92, Sixers 79
***The Sixers decided they were content with winning the first game of this home-and-home, apparently.  They failed to crack 30 in the first half and never did make a contest of it.  Even Evan Turner played bad (6-16, 13 points).
***Paul Pierce recorded his 4,000th career assist as part of his nine-dime effort.  Note that Pierce, a 15-year veteran who is generally regarded as a very complete player, trails Kobe Bryant by over 1,500 in career assists.  And that doesn’t even include Kobe’s Kobe assists.
***Chris Wilcox flipped off the kiss cam.  This actually happened in Friday’s game, but I thought you’d like to know that it did indeed happen.

Hawks 93, Grizzlies 83
***Up by eight about three minutes into the third quarter, the Grizzlies appeared to be in pretty good shape.  Zach Randolph and Marc Gasol had been dominant in the paint during the game’s first 27 minutes, scoring a combined 33 points and collaborating on beautiful plays such as this one.  Then, out of nowhere, the Hawks caught fire from the perimeter and put together a 30-7 run.  Lou Williams (21 points) went absolutely nuts, dropping three straight triples in about a minutes and 15 seconds.  I actually switched to another game right before Lou hit his first three, when the score was just about even.  I was shocked when I switched back just minutes later to find the Grizzlies losing by 15.  They never did recover.
***Josh Smith contributed 8 points to the run and scored a game-high 24.  Interestingly enough, Smoove has made 6 of his last 11 three-point shots after starting the season 2-10.  He’s currently playing the best basketball of his contract season, averaging 22/11/3 over his last four.

Clippers 102, Raptors 83
***Matt Barnes ruined a really impressive statistic by getting ejected from this game.  Had Barnes played the final 1:36, the Clippers would’ve been able to say they outscored their weekend opponents 57-26 in fourth quarters without playing a single starter.  I suppose it was unrealistic to expect Matt Barnes to play 24 consecutive minutes without doing something stupid.
***Did you remember the number?  Yes, that does mean Toronto scored just 10 points in the fourth quarter.  On a positive note, that’s twice as many as the time they scored five against the Pacers.
***DeMaR DeRoZaN had a solid homecoming, scoring 24 points on 10-17.  Fellow LA native Amir Johnson also played well, posting 11 points and 12 rebounds.  Unfortunately, those Craptors not hailing from the City of Angles struggled mightily; Dinosaurs not named DeMaR or Amir missed about 70% of their shot attempts.
***Jamal Crawford managed to score 16 points by virtue of the free throw line, but he shot just 4-14 from the floor.  Credit Terrence Ross for staying between Crawford and the basket (it is possible, apparently) in the first half.
***Blake Griffin made some cool dunks, but nothin’ like the one he missed…

Bucks 97, Nets 88
***With the Nets having lost four in a row, Avery Johnson elected to replace Kris Humprhies with Reggie Evans in the starting lineup.  He looked like a genius for about 3 minutes and 15 seconds.  Evans’ energy had an immediate impact as Brooklyn took an 11-2 lead, but to say the Bucks responded would be an understatement.  Milwaukee went on to outscore the Nets 46-20 for the remainder of the first half, resulting in a 17-point halftime lead.
***Gerald Wallace activated beast-mode in the second half.  Though his 16 points and 16 rebounds weren’t enough to lead the Nets back, it was nice to see him doing the things he used to do so frequently as a member of the Charlotte Bobcats.  Man, I miss the old Crash.  He shoots almost four threes a game now.

Roy Hibbert is expected to miss one to two weeks with a fractured ego.

Knicks 112, Nuggets 106
***It took a few years, but Carmelo Anthony has beaten the Nuggets (to be fair, this was just his second try).  Melo returned from a two-game absence and dropped 34 despite being noticeably bothered by his lacerated finger (11-16 from the stripe).
***Tyson Chandler had like 50 alley-oop dunks.  You can see two of them here.
***I think this was a closer, more interesting game than my notes are making it out to be.  I simply soured on it when I learned that Rasheed Wallace would be sitting out with a sore foot.

Jazz 117, Lakers 110
***The Utah Jazz became the latest team to invade Staples and leave with a W as they came up with 9 steals and shot 54% from the floor.  The Jazz turned the Lakers’ 14 turnovers into 25 points, most of them easy ones on the fast break.  A career game from Jordan Hill (17 points, 9 rebounds) and some red-hot three-point shooting (15-28) are all that kept this one from developing into a complete Laker disaster.
***Mo Williams was f@cking fantastic.  He had 22 points on 11 shots and highlighted his efficient performance by putting Darius Morris in the toaster.

***Dwight Howard and Antawn Jamison got ran the f@ck over by the Millsap-Jefferson-Kanter train.  Utah’s bigs contributed 52 points and 26 rebounds, leading to a 20-point disparity in the paint.  Enes Kanter was absolutely incredible off the bench as he put up 14 points in 18 minutes and looked completely unstoppable (do keep in mind that the post defense of the Lakers left a lot to be desired; they repeatedly allowed Kanter and the others to score easy baskets by giving up the baseline).
***Chris Duhon had his first double-double since December 18th of 2009.  Duhon knocked down 4 of 5 threes (most of them from a foot or two beyond the arc) on his way to 12 points and 11 assists… and the Lakers still lost.  How, Lakers, are you gonna lose a game in which Artest, Duhon, Meeks, Hill, and Ebanks produce SIXTY-TWO points?!