Posted on December 9, 2012 by Stephen Coston 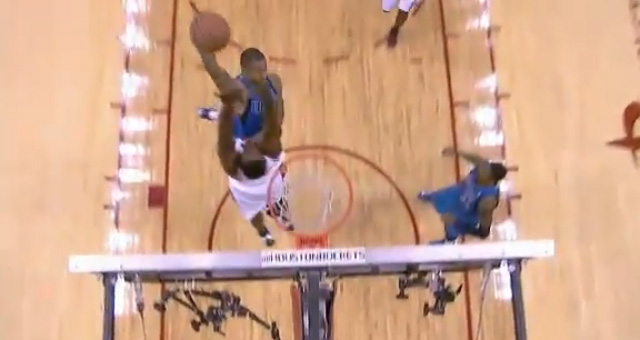 Dahntay Jones has been a noted dunker since his days of doing celebratory pushups at Duke University.  Nearing his 32nd birthday, he’s getting up there a bit, but make no mistake about it: Dahntay’s still got the bunnies to put somebody on a poster when given the opportunity.  Last night, second-year player Patrick Patterson found this out firsthand after throwing a regrettable swing pass intended for James Harden. The pass was intercepted and the rest is self explanatory…

Damn, Dahntay; that was Denver Nuggets vintage!  For those who may not recall, Jones was a leading poster maker over the course of his single season with the Nuggs, racking up four POTDs in ’08/09.  If I’m not mistaken, that memorable Denver squad — which featured the likes of JR Smith, Kenyon Martin, Carmelo Anthony, and Nene — still holds the record for most collective POTDs in a single season.

Honorable mention to Alonzo Gee, who has been a monster over the past few days.

Throwback Poster of the Day: Corey Maggette on Solomon Jones…