Eddy Curry Has A Clothing Line Based On His Own Art

Posted on December 3, 2012 by Stephen Coston 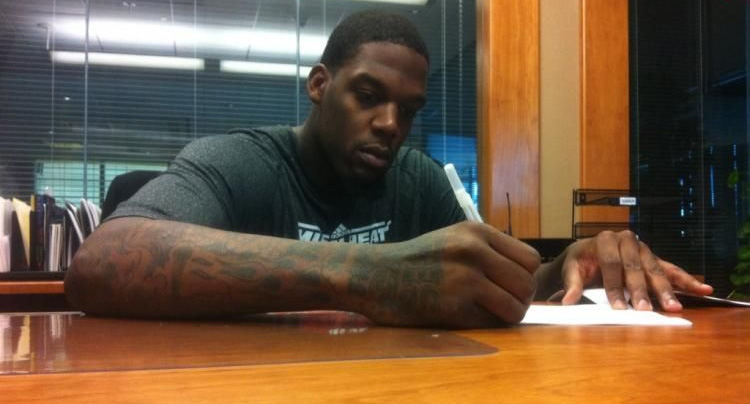 Eddy Curry’s NBA career may or may not be over.  Curry has been unemployed since being waived by the Dallas Mavericks in order to make room for Troy Murphy, who was signed on November 2nd and has since been cut loose to make room for Derek Fisher.  According to HoopsWorld’s Alex Kennedy, there are a few NBA teams with some level of interest in Curry, but that was reported a few weeks ago and none of the teams have elected to pull the trigger.  There have been “lucrative” offers from overseas, but Curry prefers something closer to home.  For now, he’s content to stand pat and focus on his clothing line.

That’s right, Eddy Curry has a clothing line.  It’s called ZooHigh, and it was founded by Curry and his wife, Patrice.  According to ZooHigh’s official website, the brand is “a vision turned reality… built on the premise that zoo animals are almost just as dope as humans.”  Hoping to gain a little more insight in regards to this vague vision and unusual premise, I conducted a little online research.  Fortunately, I stumbled upon the following article published by FNFLive.com, which goes into a little more detail about how Curry’s clothing line came to be.  Turns out E-City is not only a hardcore art enthusiast, but he’s also quite the doodler.  As a matter of fact, ZooHigh is essentially the product of a sketch he completed a few years ago.  From the aforementioned article…

ZooHigh, established in 2011, can be seen on t-shirts and hooded sweatshirts compiled of some of your favorite characters from the animal kingdom. The apparel is worn by athletes, artists and models in the entertainment world but can also be seen on children. Curry knows how important fashion is to the culture of our generation, and how a “sense of style” can impact a child’s character.

“At any school you go into – as early as the third grade- the kids want to dress nicely,” he added. “Whether or not my parents had the means to provide it, I still wanted to look nice and we always looked at who had what. Everyone wants to have a nice outfit or a nice shirt. I think it’s huge.”

It started as simple drawings but Curry, an avid art lover, began to explore his interest for fashion and created the brand. “I have been doodling this character for a couple of years,” he mentioned. “I drew this bear and his friends. I had an idea of zoo characters being in high school and I called it ZooHigh.”

After seeing its potential, Curry decided to take his creation to the next level and make t-shirts his canvas.

“First I started out with something just for my kids because my kids loved it, then grown-ups started wearing it,” he said. “Everyone liked it and so I just turned it into a clothing line. It’s pretty successful in Chicago. We have six stores in Chicago. A couple places in New York carry it. It’s getting pretty big. Now we have a whole creative team behind it.”

Might want to add some of that interesting info to your “about” page, Ed!  And as for you, reader, I’d highly recommend clicking here and checking out some ZooHigh product.  Someone on your Christmas list is sure to be looking for some clothing, and only ZooHigh offers six pages of stuff made with Eddy Curry’s involvement.  From t-shirts with Curry’s drawings on them, to $500 varsity jackets, to stocking hats with pom poms, ZooHigh’s got something for all those who believe strongly in the premise that zoo animals are in fact almost just as dope as human beings.

In all seriousness, it looks like Eddy Curry can draw pretty well.  And I’d absolutely wear that jacket if he gave it to me for free.  Hey, maybe we can strike some sort of promotional deal!  Whaddaya say, Eddy?