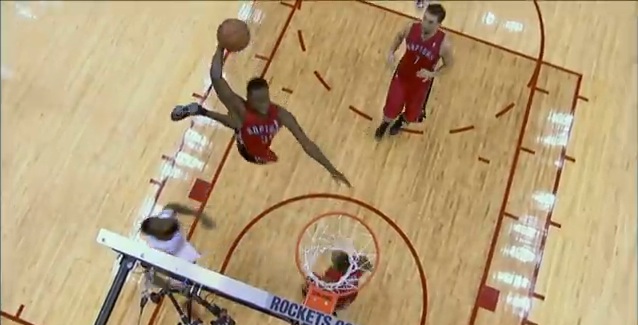 Another game, another loss for the Toronto Raptors.  Not only did they drop their fifth straight in Houston on Tuesday, but they were beaten handily by the previously-sub-.500 Rockets, who lit up the scoreboard for 117 points.  The Rockets led for nearly the entire game, but they really blew it open in the first couple minutes of the third quarter when a 17-4 run made it a 22-point contest.

As discouraging a defeat as it may have been, a blowout does present certain advantages for a rebuilding club.  Looking at this from the perspective of a Raptor fan, you’ve got to be encouraged by the play of number-eight pick Terrence Ross, who spent a career-high 35 minutes on the floor.  Ross has been used consistently but sparingly in the early going — he’s appeared in most games, but his average stint lasts the equivalent of one quarter.  With Tuesday’s game all but out of reach with so much time remaining, Ross was able to show us a little somethin’ somethin’.  Namely, his ups.

With his 19-point showing, maybe Ross will hear Dwayne Casey call his name a little more frequently.   If not, a career in Olympic long jumping could be in order.  In all seriousness, that last dunk where he takes off from outside the dotted line… that’s about as far as you’ll ever see anyone take off from in an actual game.   I happened to be tuning in when the dunk happened and it really caught me off guard.  James Harden was only about a step behind Ross, making his decision to jump from long distance a pretty bold one.  Had Harden given him a little shove or tripped him up or something the young fella really could’ve wrecked himself. Fortunately that didn’t happen.