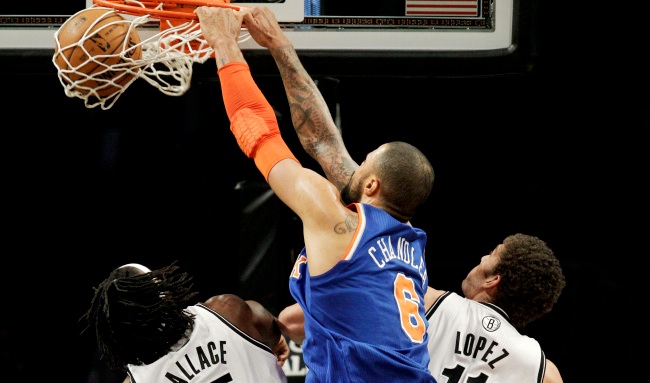 Much to the delight of all onlookers who don’t associate themselves with the Brooklyn Nets, Tyson Chandler was in rare form yesterday.  In front of 17,732 screaming fans, Chandler energetically ran, jumped, slammed, dunked, howled, and gesticulated.  His spirited play resulted in one of the best box scores of his career, as well as the following putback jam over the backs of Gerald Wallace and Brook Lopez…

Gerald never even saw it coming.  That’s probably a good thing, actually.  I mean, what difference would it have made?  I don’t think there was a damn thing Gerald could’ve done about this (after he failed to box out), meaning that Tyson Chandler’s nuts were inevitably going to be dragged across some part of his upper body.  Better the back than the face, right?

Throwback Poster of the Day: Michael Finley breaks somebody off and drives the lane for a big finish over The Admiral…