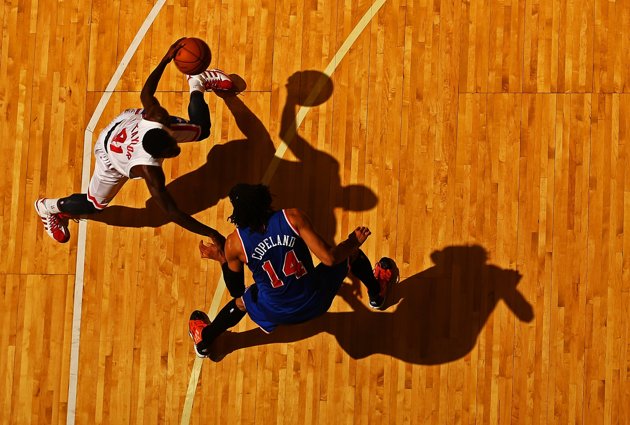 Monday, November 26th: Knicks @ Nets, 7:00 ET, TNT: Finally, it’s the first ever battle of the boroughs!  This is the game originally scheduled for opening week that got postponed due to Hurricane Sandy, and TNT will treating us to a makeup presentation tonight at 7.  Hopefully Shaquille O’Neal will forget he has to work on a Monday this week!

Tuesday, November 27th: Timberwolves @ Kings, 10:00 ET, NBALP: With the memory of Harrison Barnes’ dunk still fresh in his mind, Nikola Pekovic will have an opportunity to take out his rage on DeMarcus Cousins, who he’s been known to tool on in the past.  Also, Rick Adelman returns to his old stomping grounds.

Wednesday, November 28th: Rockets @ Thunder, 8:00 ET, NBATV: We’ve got to see James Harden’s introduction, at least.  Revenge games tend to bring out the absolute best or worst in a player, so it should be clear pretty early on how Harden is going to play.  If he looks like he did in the Finals, simply switch over to your choice of what will be many, many options.

Thursday, November 29th: Spurs @ Heat, 8:00 ET, TNT: I don’t know why I even bother to include Thursdays as part of these posts.  There’s two games, they’re almost always solid, and they’re on at different times so you can watch them both.  On a semi-related note, has the Inside crew done “Who He Play For?” yet this season?  If not, it’s about damn time.  And don’t give Shaq the answers again, because that wasn’t funny.  As a matter of fact, tell Shaq to stay out of it.

Friday, November 30th: Bucks @ Timberwolves, 8:00 ET, NBATV: The Nuggets and the Lakers are cool, but ESPN is most certainly not.  So, watch the Bucks and see how long it takes for Larry Sanders to foul himself out (and how many points, blocks, and rebounds he accrues in the process).  This has become a new favorite League Pass habit of yours truly.

Saturday, December 1st: Kings @ Clippers, 10:30 ET, NBATV: Blake Griffin continues his heated rivalry with DeMarcus Cousins as the Clippers aim to get back on track at the Staples Center.  One would think they ought to be able to put some points on the board at home against the Kings, but you never can tell with the Clipps.

Sunday, December 2nd: Magic @ Lakers, 9:30 ET, NBATV: This would be a lot more interesting if it were to be taking place in Orlando, but even still… I think it seems slightly more exciting than Suns @ Knicks.  After all, it is a Lakers game on a Sunday night!