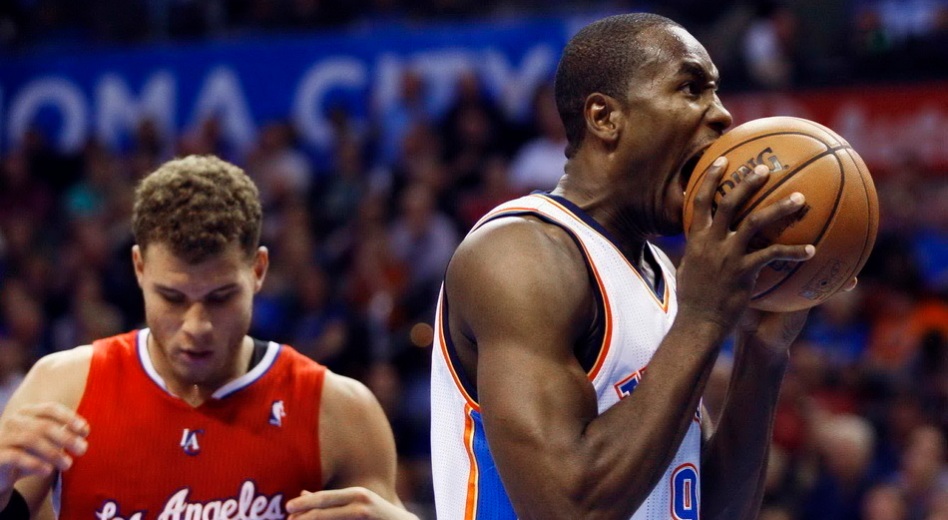 Against Chris Paul and the Clippers, OKC elected to go with the same cross match that completely changed the course of the 2012 Western Conference Finals. The strategy worked once again. With the long, spindly arms of Thabo Sefolosha seemingly waiting for him everywhere he tried to go, Chris Paul struggled as mightily as Tony Parker did late last spring.  The Clippers fought hard to force overtime despite Paul’s 2-14 shooting, but OKC’s stellar marksmanship from the perimeter eventually proved too much for Los Angeles to overcome.  Kevin Martin and Russell Westbrook each went 3-5 from distance in the 117-111 victory.  Kevin Durant offset a poor shooting night by making 19 of 21 free throws on his way to a game-high 35 points.  The Clippers are really the first quality team the Thunder have beaten, making this a fantastic win for them.

Matt Barnes and DeAndre Jordan played very well for the Clippers.  Barnes got his first start of the season and contributed 19 points, 10 of which came during the fourth quarter.  Though he could’ve shot better (7-17) and made a few questionable decisions with the ball, the Clipps do not force overtime without Barnes’ contributions.  As for DeAndre, he just continues to impress me with his improvement.  In crunch time, when he would’ve been on the bench last season, DJ went 4-5 from the stripe (3-4 in “hack-a-Shaq” situations) and scored an overtime bucket created by his own individual post-up move against a tough defender in Serge Ibaka.  His 10-point, 12-rebound double-double was just his second of the season, but that doesn’t tell the story; he’s consistently been a different player this year.

Much of the criticism in regards to the James Harden trade has been rooted in his superior defense in relation to that of Kevin Martin.  I just wanted to mention that Martin played good enough defense on two or three occasions last night to cause me to mistake him for Thabo Sefolosha.  Yes, they look exactly the same, but if Martin was getting burned I don’t think I’d have struggled to figure out which one was which.  Hubie Brown also gave Martin credit for playing some solid D.  Take that for what it’s worth.

The Wizards have endured their 10th loss of the season, and let me assure you that their collapse in Atlanta made for the most Wizardly FAIL to date.  It basically went like this: Up 4 in overtime with just 65 seconds to play, it appears that Washington is in position to take their first W of the season.  Atlanta’s next two possessions lead to Al Horford free throws, all four of which he bricks.  However, the Wizards TWICE give up offensive free-throw rebounds, leading to the game-tying points.  Washington’s offense is looking like a total train wreck at this point, but they manage to muster one successful pick-and-roll which leads to an uncontested Kevin Seraphin jump shot.  Unfortunately, it goes through the net with 7 ticks on the clock, leaving more than enough time for Kyle Korver to do this…

Korver’s fifth three-pointer does leave time for a miracle.  The Wizards inbound the ball the Kevin Seraphin, who throws up a prayer of a hook shot from about 15 feet.  The prayer goes unanswered, but wait!  There’s Martell Webster, Johnny on the spot!  One official initially appears to rule the shot good, and the Wizards run off into the locker room to celebrate.  This is all premature, of course, as a mandatory review is pending.  0-10.

Ramon Sessions has all the onions in Charlotte. For the second game in a row Sessions hit the biggest shot of the night, this time a mid-range jumper to put the Bobcats ahead of the Craptors with 30 seconds to play.  If you allowed that clip to play out then you saw what Bismack Biyombo did to preserve the victory, but I’m going to describe it anyway because it seems even crazier when written out.  On Toronto’s last-ditch possession, Biyombo caused a DeRoZaN miss, straight up swatted him after the offensive board, ran out all the way to the three-point line to prevent an Andrea Bargnani three-point attempt, and got back under the rim to protect against another DeRoZaN layup try.  Aside from simply ripping the rebound, Bismack basically did everything in his power to assure that the Bobcats did not lose this game.  Impressive effort.  ‘Cats are 6-2 (!!!).

Despite his multiple failures to score during that wild sequence, DeMaR DeRoZaN was kinda beasty down he stretch for the Craptors.  He scored 9 of his 14 points in the fourth, including his team’s last 5.  Also, Violet Palmer was calling this game, so take the entire thing with a grain of salt.

Kobe Bryant’s 38 points on 11-20 (guy was a flamethrower) were not enough to lead the Lakers past the Kings, who put together a 71-point second half.  Despite DeMarcus Cousins’ foul trouble, Sacramento dominated the battle in the paint, scoring 50 points to LA’s 22.  Give credit to Chuck Hayes, who will haunt Dwight Howard’s dreams for weeks, as well as Jason Thompson, who came through with a 13-point, 10-rebound effort.  Also, DeMarcus Cousins.  Like I said, he was in foul trouble… but he came in for the last couple minutes and made Pau Gasol look straight up silly.  Observe the second of his consecutive driving buckets and note the crossover that created it.  As much as I detest his attitude, I can’t help but marvel at his skills (take a look at his behind-the-back pass from earlier in the game).  I sort of doubt that he’ll ever get his head screwed on completely straight, but if he did… man.

Jodie Meeks took 9 shots in this game. Dwight Howard took 4 (and 4 free throws).  Again, credit Chuck Hayes… but even he shouldn’t be able to keep Dwight that uninvolved.

OJ Mayo (27 points) led a third-quarter Mavericks comeback and Vince Carter’s fourth-quarter heroics helped to secure a 114-111 victory over the Knicks.  New York put up 31 points in the fourth quarter, but every time it seemed as though they were about to crest the hill it was Carter piling on another Dallas bucket.  VC had what was easily his best game of the season, dropping 14 of his 25 in the final stanza.  Fortunately for me, he still has a legion of dedicated fans who make this job easier…

As you can see, Carter was scorching hot from the perimeter.  He shot 7-13 outside the paint and drilled both of his fourth-quarter three-point attempts.  As for the Knicks, they got great offensive production out of their role players — 21 from Chandler, 18 from Felton, 17 from Kidd — but they were unable to stop the Mavs from scoring (114 points allowed represent a season high).  Dallas set some great screens to free up shooters and New York did a poor job of closing out.  Note that the finish to this game could’ve been much different had the officials not wiped away a Carmelo Anthony circus shot with 2:26 to go.  As Anthony drove to the basket, Carter moved into his path, causing Anthony to do a 180 in mid air.  Somehow, the shot was made… but an offensive foul was called.  I felt that it was the wrong call, and a three-point play would’ve sliced the Dallas lead to two.  Anthony did get to shoot for revenge (and ultimately the game), but a good contest from Shawn Marion led to the shot being missed.

Wait, what?  Kevin Love played last night?! Yes, yes he did.  Not only did he play, he scored 34 points and grabbed 14 rebounds (16 and 5 of which came in the game’s first 9 minutes).  The Timberwolves were unable to beat the Nuggets, however, as they mustered a mere 36 points in the second half.  Danilo Gallinari led Denver with 19 as he encouragingly made half his shots (6-11) for the second time in three games.  It’s the first time he’s shot 50% in a Nuggets victory since last April.

It took one overtime, 37 points from Paul George, and a Roy Hibbert triple-double (10/11/11 BLK), but the Pacers picked up a much-needed win over the Hornets and reached the 100-point plateau for just the third time this season.  Expected to step up big in the absence of Danny Granger, George has been a bit of a disappointment (shooting just 40% from the floor and turning the ball over nearly 3 times per game), but his 9-13 three-point shooting in this particular game is sure to get the hype train moving full speed ahead once again.

Udonis Haslem became the all-time leading rebounder in Miami Heat history by passing Alonzo Mourning in front of his hometown fans.  Haslem is from Miami, has played for the Heat for the entirety of his 10-year NBA career, and becomes the first undrafted player in NBA history to secure such a record.

The Heat completed the feel good story by beating the Bucks in overtime.  LeBron, Bosh, and Wade all had great games (20+ points apiece, 28 boards between LB and CB), but it was Bucks rookie John Henson who really turned heads with an 18-point, 17-rebound performance off the bench.  Henson was forced into the most extensive action of his NBA career due to the ejection of Larry Sanders, whose antics may end up costing him a little more than some money.  Minutes were already scarce in Milwaukee’s frontcourt, and with the 14th overall pick having a game like this… Larry better keep his act together.

Jeremy Lin was nowhere to be found as his Rockets hung on to defeat the Bulls 93-89.  Lin wasn’t injured, and he wasn’t in foul trouble… he was simply getting toasted by Nate Robinson, so acting head coach Calvin Samson elected to bench him down the stretch in favor of Toney Douglas.  Looking forward to his first game against the New York Knicks, Lin’s confidence — which has been shaky all along— figures to be sinking towards a new low.  With the physical Raymond Felton foaming at the mouth over the thought of giving Lin the business, I wouldn’t be surprised if we see another heavy dose of Douglas on Friday night.

It’s no secret that the Celtics can’t rebound for sh!t, but ONE offensive board?  Did the scorekeepers accidentally put the rest in Rajon Rondo’s assist column or something?  I understand that Doc Rivers doesn’t implore his team to crash the offensive glass, but ONE offensive rebound?  How is that even possible?  Twenty-five total boards is pretty unimpressive as well.

Or Peja Stojakovic?  Bucks fans must be wondering where that silky touch was when he elected to cast off from 15 feet with the game on the line vs the Bobcats.

Box Score Obersvations: Jermaine O’Neal impressed the seniors in his retirement community by scoring 17 points as the Suns beat the Blazers.  Jeremy Pargo did a damn good Kyrie Irving impersonation for the Cavaliers — Pargo dropped 28 to lead the Cavs past the Sixers, who shot 36%.  Classic Brook Lopez line: 22 points and 3 rebounds in a loss to Golden State.  Klay Thompson dropped 23 as he connected on better than half his shots (10-19) for the first time this season.  Chandler Parsons grabbed a career-high 13 rebounds (and scored 18 points) in Houston’s aforementioned triumph over Chicago.  Tiago Splitter went 9-11 for 23 points to help the Spurs beat the Celtics.  Andrew Nicholson’s 15 points led the Magic in their 16-point win over the Pistons.

Highlight Recap: I’ve really got to wrap this sh!t up, so let’s just roll with the top 10…

One Response to The Starting Lineup: Attempting To Summarize Complete Insanity