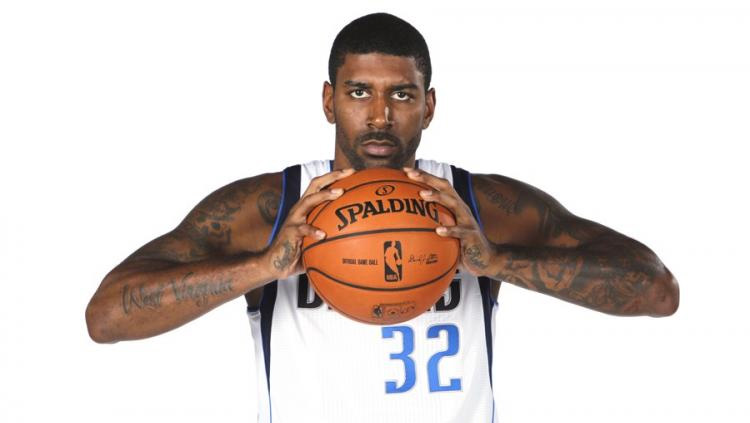 Chalk up another L for the Dallas Mavericks (their fifth in seven games), but color me impressed by OJ Mayo. In overtime, Golden State pounced on Dallas and scored the first seven points. The Mavs were able to recover, though, as Mayo composed an individual 7-0 run to tie the game. He got started by answering a Harrison Barnes three, then brought his boys to within a bucket with a contested layup in transition. His most impressive deuce — a driving finger roll set up by a right-to-left crossover — was the one that evened the score with a minute and a half to play. Following a pair of Steph Curry free throws, Mayo came through once again. At this point everyone in the building knew he was going to shoot the ball, but it simply didn’t matter… Juice was feeling it, and he spun into the lane for an eight-foot floater. A David Lee layup put the Warriors back in control, and Golden State finally forced the ball out of Mayo’s hands. Shawn Marion tossed up a brick and Curry iced it at the stripe. OJ scored one more bucket before the final buzzer, making him responsible for all 11 of Dallas’s points in OT. Very impressive 27-point showing from Mayo, who’s averaging 22 PPG as he continues to stroke it from downtown (39-67 on the season).

Stephen Curry was the catalyst for Golden State. He scored or assisted on all four overtime buckets for the Dubs as his penetration led to easy attempts for the likes of Festus Ezili and David Lee. The 25 points he’d scored in regulation kept the defense true, which led to a lethal pick-and-roll attack. Curry finished with a game-high 31 points (20 in the 4th/OT) and 9 assists.

Would you believe me if I told you the Spurs lost their second consecutive game to the Clippers for the first time in the Tim Duncan era because they were unable to contain Ronny Turiaf? While there was a lot more to it than that, I’m certainly not making this up. Turiaf, who got a DNPCD in the Clippers’ previous game, checked in for the first time at the 9:47 mark of the fourth. Less than three minutes later, he’d already ripped three offensive rebounds (and converted two of them into scores). Had the Spurs been able to secure those boards they would’ve had a 7-0 run going, and that would’ve tied the game. Unfortunately for them, the trend that Turiaf started continued throughout the game’s deciding minutes. The Clipps came up with four more offensive boards in the fourth… three of which came courtesy of the smallest man in uniform, Eric Bledsoe. The Spurs hung around thanks to some stellar three-point shooting from The Red Rocket, but Chris Paul eventually put them away with his usual heroics.

The Nuggets bounced back from a 26-point loss to beat the league’s hottest team and end a three-game losing streak. Against the Grizzlies in Memphis, the Nuggets struggled to shoot the ball from the outside (9-30 from beyond the paint), but a 21-12 advantage on the offensive glass kept them competitive throughout the evening. Credit JaVale McGee and Kenneth Faried, who combined for 28 points and 21 boards as they outplayed their respective counterparts in Zach Randolph and Mo Speights. It was a McGee O-Reb/layup that gave the Nuggets a one-point lead with 46 seconds to go, leading to Danilo Gallinari’s three-point dagger. Though Gallo continues to struggle (5-15), you’ve got to respect his sustained aggressiveness. Danilo scored 9 points in the fourth, mostly at the free throw line, and he had the stones to take the biggest shot of the game despite the fact that he was 1-5 from distance to that point. The Nuggets had some awful possessions late in this game where guys (mostly Ty Lawson) passed up wide open shots in the flow of the offense, and at least Gallinari realized that someone had to put the shots up.

Michael Kidd-Gilchrist (15/9/4/1/1) was active — sometimes for good, sometimes for… not so good — as the Bobcats came back from down 11 in the fourth to beat the Central-Division-leading Bucks. MKG’s 4-13 shooting indicates his assertiveness, but also reflects the frequency of his attempts to do a little too much. Nevertheless, his efforts led to a slam dunk as well as four free throws in the fourth quarter, all of which he made. His six points helped to tip the scales in favor of the Bobcats, who also got key buckets from Kemba Walker, BJ Mullens, and Ramon Sessions. Sessions, who dropped 21 off the bench, nailed the game’s biggest shot, a three-pointer from the left wing to tie it up at 96. Having fallen behind by two with less than a minute to go, the Bucks needed a score. That’s when Scott Skiles made a fatal mistake — he left Samuel Dalembert in the game. With 13 seconds on the shot clock, the ball ended up in the hands of Dalembert. Unable to recognize why he’d been left unguarded at the free throw line, the ever-overconfident Dalembert tossed up the ugliest 15-footer I’ve seen since Marcus Camby last cast off. Needless to say, the shot failed to go in. Long live Sammy Dumbles!

To be fair, there was nothing Scott Skiles and the Bucks could’ve done to win this game.  Charlotte had the basketball gods on their side.  Don’t believe me?  Observe this omen…

Clearly, the gods would’ve directed Samuel’s shot into the basket had they been interested in evening things out.

The Wizards were THIS close to avoiding 0-9 and the worst start in franchise history, but they couldn’t quite beat the struggling Pacers. I refused to subject myself to this pitiful contest, but I think the basic gist of what happened can be summed up as follows: the Pacers went way ahead, the Wizards came storming back, and David West saved Indiana’s ass with a barrage of mid-range jump shots. West finished with 30 points as he scored 6 of his 10 buckets in the fourth.

Unfortunately, I have two broken fingers to report: Kyrie Irving and Stephen Jackson will each miss a month with a fractured digit. Really bad news for the Cavaliers, obviously, as well as all those who enjoy the game of basketball.

Box Score Observations: Mississippi Moped’s 31 big ones paced the Bucks in their aforementioned loss. Roy Hibbert finally had a good game, posting 20 points and 12 boards. DeShawn Stevenson contributed 1 steal to lead the Hawks past the Magic. Jamal Crawford revealed that he’s still human by going 4-14 in San Antonio. Tim Duncan’s 20-point, 14-rebound double-double was his fifth of the young season. Harrison Barnes gave Steph Curry some assistance in the form of 20 points and 12 boards. Chris Kaveman produced 18 points and ripped 17 rebounds. Jeremy Lin and James Harden went a combined 6-21 as the Rockets blew up on the launch pad in Utah.