Roy Hibbert Is “Tired Of Playing Like Some [Expletive]“ 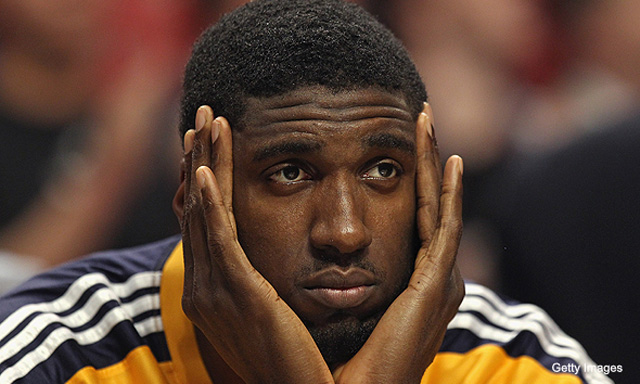 November has been a tough month for Roy Hibbert and the Indiana Pacers.  Many expected the Pacers to be one of the Eastern Conference’s top teams this season, but they’ve struggled to find any offensive continuity without leading scorer Danny Granger, whom they’ll be missing for the majority of the regular season.  The Pacers have actually held opponents to a league-leading 90 PPG on just 40% shooting, so that’s encouraging… but their offense has been so bad that it simply hasn’t mattered.  Hibbert and company are averaging just 89 PPG, making them 28th in scoring, and Roy has watched his own individual production fall off a cliff.

With a new $58 million contract and an opportunity to build upon his first All-Star season, Hibbert seemed primed to shoulder an increased portion of the offensive burden.  However, his scoring is down 4 PPG and his shooting percentage has plunged from nearly 50% to under 40%.  He’s struggling to make his free throws, and he’s not rebounding well, either.  Hibbert is playing like sh!t, basically, and he knows it.  After recording 6 points and 6 turnovers in this afternoon’s blowout loss to the Knicks — which dropped the Pacers to 4-7 — Hibbert bluntly expressed his frustration.

Welp… I suppose Hibbert’s acknowledgment of his role in the disaster that has been Indiana’s season thus far is a positive, as is the fact that he seems quite angry about it.  The Pacers need Hibbert to step his game up in order to right the ship before the surging Milwaukee Bucks take a commanding lead in the Central Division!

Ironically, insult was added to injury today when the Pacers were forced to take cold showers after shooting 39.4% from the floor.