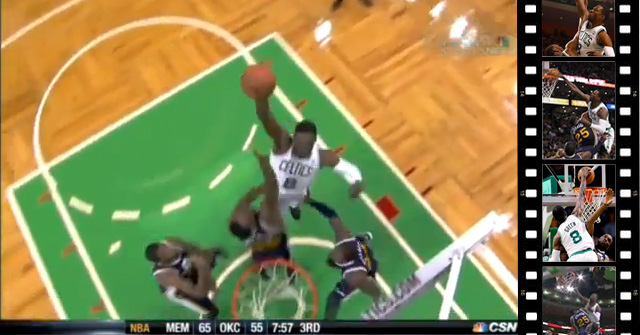 I’ve come to the conclusion that I really, truly hope Jeff Green pans out.  Not only for the sake of the Celtics, or because it would make for an excellent comeback story… but because I can’t get enough of his swooping, right-handed takes to the rack.  I don’t know about you, but I find them to be exceptionally exciting… especially the ones he finishes with devastating authority despite the presence of seven-foot, 300-pound human beings.

Green aimed to do something of precisely that sort in Boston’s recent win over Milwaukee, but he was fouled by Larry Sanders.  Yesterday, he finished the job and blew off some steam at the expense of former Celtic Al Jefferson…

It seems that I’m not the only one who enjoys an aggressive Jeff Green.  His teammates are so excited about the dunk that they’ve offered to pay for his $2,000 taunt.  If that isn’t proof enough of his compadres’ enthusiasm, note the celebration which takes place around Boston’s bench.  Even Rajon Rondo, who sat out much of the second half with a sprained right ankle, shot up from his seat and took four one-legged hops right onto the court.  Can’t honestly say I’ve ever seen anything quite like that before!

Honorable mention to Malcolm Lee, who would be a winner on virtually any other day.

Throwback Poster of the Day: As if he were a 6’10″ power forward, Vince Carter drop steps and destroys Kendrick Perkins…