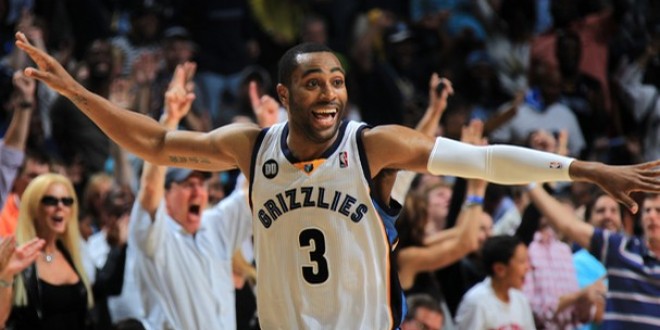 ***There are six things you need to know about this game: A) The Grizzlies made a season-high 14 threes. B) Wayne Ellington was responsible for 7 of them. C) Two of Ellington’s threes came during a 13-0 fourth-quarter run. D) That fourth-quarter run turned what had been a single-digit affair into a 22-point drubbing. E) Jerryd Bayless sparked the run by denying a Ray Allen dunk. F) Rudy Gay did this.

***Considering that they were missing half of their frontcourt rotation, I thought the Kings put up a pretty admirable fight. Jason Thompson and Chuck Hayes battled Dwight Howard about as evenly as two undersized power forwards possibly could, recording a combined 21 points and 18 rebounds to Howard’s 23 and 18. Isaiah Thomas got off to a hot, energetic start (he was even crashing the offensive boards), and although he fizzled a bit, Jimmer Fredette picked up where he left off. I must admit, Jimmer was pretty ridiculous in this game… he dropped 18 points in under 11 minutes.
***Ron Artest capped off an 18-point outing with consecutive threes in garbage time. He also dunked an alley-oop with two hands. I’m not about to sort through all the Youtube search results for “World Peace,” but I assure you that I’m not making this up.

***At the third quarter buzzer, Russell Westbrook hit a halfcourt shot to put the Thunder up 6. Then he made a regular three to put them up 9, and then another one to extend the Oklahoma City lead to 12. Welp.
***Alonzo Gee trying (unsuccessfully) to dunk on Serge Ibaka is something I enjoyed.  Serge Ibaka denied 7 shots in the game, and you can see them all right here.

***Larry Drew shuffled his starting lineup to match the size of the Clippers, but Atlanta’s attempt to run its offense through Josh Smith on the block was pretty unsuccessful (13 points, 5 turnovers). The Hawks stuck around for a while, but only because Lou Williams was hot from the outside.
***DeAndre Jordan’s impact was limited due to foul trouble, but he made another hook shot in the first quarter. He also drew a double team in the post later on. His streak of consecutive 20-point games came to an end, but his progress continues (note: Jordan has made 7 consecutive free throws).

***Kris Humphries racked up 21 rebounds — one fewer than Glen Davis and Nikola Vucevic got… combined… on their best collective rebounding day of the season.
***Jerry Stackhouse, 38, spent multiple possessions guarding Moe Harkless, 19. Harkless was unable to score in the game despite the opportunity to be covered by a man who could realistically be his father.

***Jrue Holiday, Nick Young, Dorell Wright, and Thaddeus Young all scored 15+ for Philly. Just thought that should be noted.

***Michael Kidd-Gilchrist (25/12) and Kemba Walker (26/6/7) scored half of Charlotte’s points, Ramon Sessions sent the game to OT, and former Maverick/amnesty victim Brendan Haywood scored two buckets in the final six minutes. The NBA, where the unexpected happens.
***OJ Mayo extended his streak of consecutive 20-point games to 5, meaning that he’s matched the longest such streak of his career (which took place nearly four years ago, in November of his rookie season). He continues to shoot the ball incredibly well from the outside (nearly 61%).

***For the first time in three games James Harden finished with more points than shots (20 to 14). He did have 5 turnovers, as he has in five consecutive outings. The Rockets won, so Harden obviously did what he had to do… but it wasn’t exactly the bounce-back game that many hoped to see. Things are only going to get tougher from here as the Rockets will face the Heat, Bulls, and Knicks over the next two weeks.
***Detroit was already down 15 headed into the fourth quarter… then they missed 10 consecutive shots. If you take it back to the third, the Pistons missed 16 shots in a row and failed to score a single point for 8 minutes and 19 seconds.

***Joakim Noah scored the biggest bucket of the game, a driving layup around Nikola Pekovic to put the Bulls up 7 with 42 seconds to play. The T-Wolves had made it a game with a 5-0 mini run, and Pekovic was leading the Wolves with 18. However, Noah proved he was up to the task all night long as he scored 17 points, grabbed 7 rebounds, and rejected 4 shots. Noah is having a fantastic season thus far — he’s averaging 15 points, 9 rebounds, 3 assists, and 2.5 blocks.
***The T-Wolves will be forced to deal with yet another injury. Chase Budinger, who has been contributing 11 PPG, left this game with a torn meniscus. Bud’s athleticism and ability to stretch the floor have been valuable to the Wolves, and he was playing much more consistently than Derrick Williams (0-10 in this game).

***Congratulations to the Celtics on beating a team other than the Washington Wizards.
***There was a Jeff Green sighting in the fourth quarter. Green twice drove to the rack for impressive finishes and once came up with a big block in transition as he scored 8 of his 12 points in the final stanza. Along with Paul Pierce, who got hot late and battled Monta Ellis for six consecutive fourth-quarter possessions, Green helped the Celtics recover from a 39-point first half to score 32 in the final 12 minutes.
***Monta Ellis had his best game of the season as he exploded for 32 points and 8 assists. Larry Sanders also played well for Milwaukee. Samuel Dalembert started the game and looked surprisingly effective early, but Sanders came in and continuously killed the Celtics on the glass. His efforts earned him a double-double (10 points, 12 rebounds) as well as the fourth-quarter minutes.

***Al Jefferson and Paul Millsap have been a bit quiet, but not on Saturday. Utah’s starting frontcourt combined for 45 points and 27 rebounds while Derrick Favors and Enes Kanter added another 16 and 8 off the bench. Beyond Marcin Gortat and Louis Scola, the Suns have virtually no size to speak of… so as the two of them racked up 4 fouls a piece, Utah continued to pound the ball into the post, leading to 52 paint points.

***Gary Neal and Nicolas Batum both scored career highs — 27 and 33 respectively — and they represent just 2 of the game’s 11 double-figure scorers. LaMarcus Aldridge had 29, Tim Duncan 22, Damian Lillard 20, Manu Ginobili 17, and so on. Neal dropped 20 of his 27 in the second half as the Spurs rallied from down 14.

***Wait, it took Denver and Golden State 10 extra minutes to reach 208 total points? Yes, yes it did. Surprisingly, neither team shot 40% in this game. Danilo Gallinari, Andre Iguodala, and Klay Thompson were the primary missers of shots, going a combined 24-72 (33%). None of the three have shot the ball particularly well on the season, but it’s been a massive struggle for Gallinari. Danilo, who was once known as the best shooter Mike D’Antoni had ever seen, is making just 20% of his threes on more than 7 attempts per game.
***Golden State had a five-point lead in the 4th, a two-point lead in OT #1, and a five-point lead in OT #2. Ironically, Iguodala and Gallinari suddenly found the range from deep, hitting consecutive threes in the final minute of OT #2. Meanwhile, the Warriors failed to score a point over the last 2 minutes and 47 seconds.