Posted on November 7, 2012 by Stephen Coston 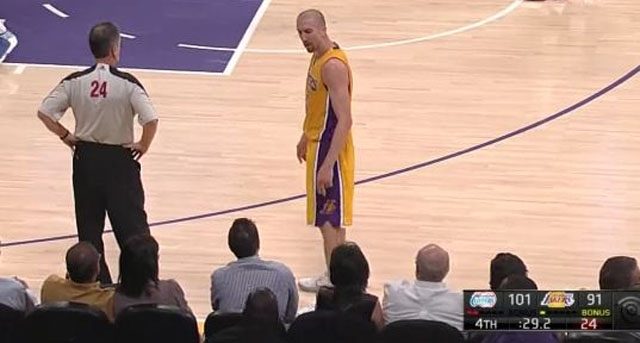 ESPN: Steve Blake has been fined $25,000 for his role in a heated exchange with a fan during last Friday’s loss to the Clippers.  According to ESPN, the incident began when a longtime Laker fan and season ticket holder told Blake, “you need to knock down some open shots.”  If I ran the NBA this fan would be forced to beat Steve Blake in a three-point shooting contest in order to retain his courtside seat.  If he shoots an airball, Blake gets to kick him in the nuts.

The Classical: An entertaining depiction of the NBA’s most loveable brute, Nikola Pekovic.

Pro Basketball Talk/Ball Don’t Lie: JR Smith is appalled by the price of LeBron’s new sneakers.  Warren Buffett, on the other hand, admires his business savvy.

NBA.COM: Danny Granger is expected to miss three months (!!!) with left patellar tendinitis.  With the Pacers currently ranking amongst the league’s bottom feeders in a variety of scoring categories (25th in points, 26th in FG%, 24th in 3FG%), this is obviously troubling news for Indiana.

TSN: A lot has changed over the past eight years.  Take Vince Carter’s willingness to play for the Toronto Raptors, for instance.  Conversely, some things have remained very much the same.  For example, I’m pretty sure Canada still hates Vince Carter.

SLAM: Contradiction of the Day, featuring Kevin Garnett on Jared Sullinger: “He’s a great rebounder. His IQ is incredible. He reminds me a lot of Perk, man.”

DIME: The Knicks aim to destroy your confidence in order to earn your viewership on Friday nights.

Yahoo!: James Harden wishes the Thunder gave him more time to pray before dealing him to the Houston Rockets.