Posted on November 6, 2012 by Stephen Coston 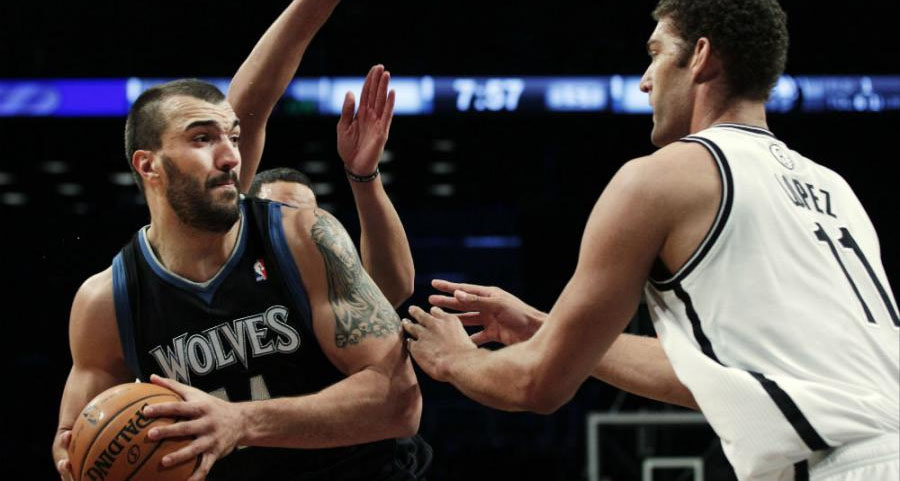 In Brooklyn, it took the Timberwolves approximately 15 minutes to come back from a 22-point second-half deficit. Running a lineup that consisted primarily of Alexey Shved, Chase Budinger, Andrei Kirilenko, Dante Cunningham, and Nikola Pekovic, the Wolves put together a 32-point fourth quarter during which they buried four three-pointers and controlled the boards 19 to 9.  It was the rookie Shved who led the offensive charge with 11 points (nailed three key jump shots, including the one that gave Minnesota the lead with two minutes to go), and it was Dante Cunningham whose efforts led to the massive disparity on the glass.  Cunningham played like a man possessed as he ripped 7 rebounds in the final quarter (and I use the word “rip” quite literally; Cunningham actually ripped the ball from the grasp of Kris Humphries on at least one occasion).  He was effective in scoring the ball, too, as he finished the game with 11 points off the bench.  The Nets, who’d been hot from the perimeter throughout the first half, managed a mere 10 points in the fourth quarter, and the T-Wolves ended up taking an 11-point victory.

This is Alexey Shved now, by the way… 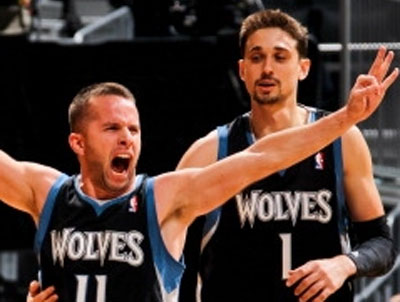 Nikola Pekovic wasn’t the catalyst during the comeback, but his presence in the post was about the only thing the T-Wolves had going for ‘em until the fourth quarter.  Prior to getting into some foul trouble, Pekovic dominated Brook Lopez and Reggie Evans to the tune of 17 first-half points.  Pekovic, who had one of his breakout games in New Jersey last season, wrapped up the evening with game-high honors in the scoring column (21 points).

Zach Randolph’s 16-point, 18-rebound double-double led the Grizzlies past the Jazz (103-94).  Randolph is now averaging 15 points and 16 rebounds (also, a league-leading 6.7 z-bounds) through three games.  Small sample size, obviously, but it’s encouraging to see him doubling his rebounding numbers from last season.  His minutes are way up and his shot attempts have been close to what they were in ’10/11.

OJ Mayo’s career as a Dallas Maverick got off to a slow start. In his first two games he scored a total of 24 points on 7-22, but things have taken a turn for the better over the last two games, in which he’s scored 62 points.  Yesterday, on his 25th birthday, Mayo followed up a 30-point outing by hanging 32 on the Blazers.  He nailed 12 of 18 shots in what was his biggest game since November of 2009, when he hung 40 on the Nuggets (prior to Saturday’s game against Charlotte, this represented Mayo’s most recent 30-point performance).  Mayo’s six threes helped the Mavericks shoot 50% from long range and ultimately defeat the Blazers 114-91.  Dallas improves to 3-1 with their second straight win by a margin of 20+.  Alongside Mayo, Darren Collison continues to play very well; he posted 14 points and 13 assists last night.

As the Kings hung on to beat the Warriors, 12 points were scored in the final 2:10.  I suck at math, but I believe that equates to a pace of 250+ points on a 48-minute basis.  So, in a game that ended 94-92, it appears the fireworks were set off late.  Between 2:10 and :56, the teams traded scores on five consecutive possessions.  Klay Thompson, who finished with 22, brought GSW within three as he curled around an Andrew Bogut screen and scored a layup.  The Warriors defended well on the ensuing Kings possession, but Aaron Brooks was able to toss in a bail-out jumper from the elbow.  Following a pair of Bogut free throws, Brooks saved the day once again with a running bank shot.  The Warriors were able to get as close as one, but never did take the lead.  Stephen Curry got a decent look to win the game at the buzzer, but his long three-pointer from straight away bounced hard off the iron.  This was the second consecutive game in which Aaron Brooks finished as Keith Smart’s point guard while Isaiah Thomas watched from the bench.  It certainly appears that Brooks is on his way to the starting lineup.

Interesting garbage time in Philadelphia: With the Knicks up 20 at the 4:55 mark of the third, Rasheed Wallace (the NBA’s current leader in PER) checked in to the sound of rousing cheers from his hometown crowd.  Inspired by a combination of the love and the Sixers not guarding him, ‘Sheed fired off five threes in five minutes, including a successful buzzer-beater to cap the third quarter.  He tossed up a couple more shots in the fourth and finished his 13-minute stint with 10 points on 4-9.

When ‘Sheed began to slow his role, it was JR Smith’s turn to take control of the reigns.  In the middle part of the fourth, JR scored four consecutive field goals for the Knicks, including the following dunk on an unconventional fast break…

You know it was sick because James White looked impressed. Also, I want to be a fly on the wall when this play comes up in Doug Collins’ next film session. To him, this spectacular sequence is nothing but a knucklehead out-hustling everybody in a 19-point game, and I imagine that such things inspire memorable explosions.

The NBA’s flopping policy has officially been enforced. It was announced yesterday that JJ Barea and Donald Sloan have been issued warning for flopping.  Sloan was spotted executing a classic Chris Paul helicopter against the Bulls, and Barea was caught doing a bit of over-accentuating.

Observe this two-minute excerpt from Cavs @ Clippers and understand why I am always watching the Clippers.

The Clippers went on to lose (Kyrie Irving & Dion Waiters combined to score 52) their second in a row, but that’s not the point.  Thrilling sequences such as this one happen in the majority of Clipper games, and that’s why they remain my go-to team on League Pass.

Lowlight Recap, Nick Young Edition: Nick Young’s entire season has been a lowlight, but this play was particularly comical.  Note the time on the clock and the unguarded status of Thaddeus Young…

I’ve come to the conclusion that Nick Young is basically fast food: you ask for something specific (buckets off the bench; a cheeseburger), but you never really know what you’re going to get.  Last night, Doug Collins went to the drive thru and scored some cold french fries and an overfilled soda (that’s code for 12 points on 4-15).

Box Score Observations: Andrei Kirilenko did it all for the Wolves (16/10/6 + 4 blocks and a steal).  Chase Budinger made 7 of 10 shots on his way to scoring 16 of his own.  Ray Allen scored 15 on 3-4 from downtown in Miami’s 25-point win over Phoenix.  Former Heater Michael Beasley struggled mightily, scoring just 7 points on 13 shots.  Tim Duncan recorded his third double-double in four games (14/11), and it only took him 25 minutes.  The Spurs destroyed the Pacers (101-79) in San Antonio.  Damian Lillard had his first poor performance as he struggled to connect from long range (1-8) in Portland’s loss to Dallas.  DeMarcus Cousins did 23 and 15 for the Kings.