Posted on November 5, 2012 by Stephen Coston 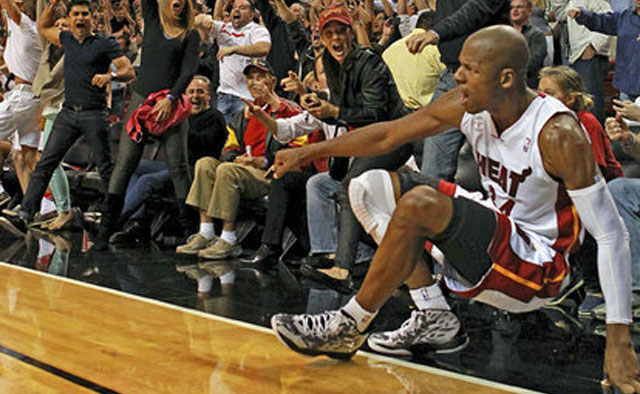 ***Miami trails Denver by a point with 10 seconds to go.  LeBron drives to his left and passes the ball to the corner.  Here we go again, right?  Wrong.  I suppose that’s the difference a Ray Allen will make for you.

***Danilo Gallinari’s missed three-pointer at the buzzer was just one of his eight misses from long range.  Going back to the start of last postseason, he’s now connected on just 7 of his last 41 attempts from distance.  That’s 17%, which is pretty freaking bad for a guy who once shot 38% on six attempts per game.

***Chris Bosh made SO MANY jumpers.  He scored 40 points (his highest total as a member of the Heat), and 19 of them came on some variation of the jump shot.  As impressive as that is, it doesn’t really make for an exciting highlight reel… but you should still watch him bury shot after shot.  Kenneth Faried did a reasonable job contesting a few of them.

***Would you believe me if I told you the Kings became involved in a defensive battle?  Thanks in large part to the hard work of Chuck Hayes, Sacramento was able to hold Indiana to 91 points in regulation.  However, they only scored 91 themselves (the game featured multiple scoring droughts of 2+ minutes during crunch time), and eventually fell apart in a second overtime.  Still, we need to give it up for Chuck Hayes.  He battled David West to the bitter end, forcing Indiana’s go-to guy to take 21 shots to reach 18 points.

***Marcus Thornton’s three-point shooting (4-10) kept the Kings in the game late in the fourth quarter.  He drilled one from the top of the key to send the game to OT, and had made another to cut a six-point lead in half just a few minutes prior.

***Throughout the fourth quarter and both overtimes, Keith Smart spent multiple timeouts scolding DeMarcus Cousins.  I’m not exactly sure what Mr. Smart was so upset about, but Sacramento’s commentators seemed to believe it had something to do with his whereabouts on the floor.  Cousins had good and bad moments down the stretch… he made the pass that led to Thornton’s game-tying shot, but he also forfeited deep post position to Roy Hibbert and goaltended a crucial George Hill layup that may not have been headed into the hole.

***A couple of interesting developments regarding playing time: For the Kings, Aaron Brooks played out the final 15 minutes.  He missed a few shots and made a terrible pass, but I suppose Keith Smart had seen enough of Thomas, who’d racked up 5 turnovers in 22 minutes.  For the Pacers, Lance Stephenson played 32 minutes, which was nearly a new career high (and it basically was, ’cause the only other time he played 30 minutes was the final game of last season, which meant nothing).  Twenty-two of those minutes were the fourth quarter and both overtimes, during which he never sat.  Stephenson shot just 4-12, but he did nail the first bucket of OT, a three-pointer from the corner.

***Brandon Jennings and Monta Ellis shot three consecutive air balls as the Cavs came back from down seven in the final 1:30.  To the surprise of no one, Kyrie Irving scored each and every one of Cleveland’s points during the comeback (he had their final 11, actually).  He drove the ball the length of the floor to tie the game with .7 seconds to go, setting the stage for Brandon Jennings to redeem himself.

***Mike Dunleavy was basically on fire for the duration of this game.  He scored 29 points, made 6 of 7 from distance, and nailed each of the 4 three-pointers he took in the second half.  Larry Sanders came up equally large of the bench, scoring 17 points, blocking 4 shots, and ripping 7 rebounds before fouling out in 30 minutes.  Those 17 points included this between-the-legs crossover/driving dunk.  Tyler Zeller brings out the offensive player in Larry Sanders, apparently.

***Neither team made a basket in the final two minutes, but the Wizards executed especially poorly down the stretch.  Their lack of a half-decent point guard basically killed them; they turned the ball over on two of their last three possessions, and their final shots included a 30-foot Jordan Crawford heave and a fading air ball from Martell Webster.

***At the end of the season someone will compile a video of the top 10 circus shots.  Every clip will feature the Wizards on defense, because their luck is just that bad.

***The all-around effort of Nicolas Batum helped to spoil the home debut of James Harden.  Batum had been quiet in the first half, but he scored 13 of his 17 in the third quarter to lead the Blazers from down 6 to within 1.  He also collected 6 steals and started blocking all of James Harden’s layups.

***In regards to James Harden… he got off to another quick start, scoring 10 points in the first quarter.  He appeared to become a bit fatigued as the game went on, though, and began missing at the rim and coming up short from downtown.  Only 9 of his 24 came in the second half, and it ended up taking him 24 shots to get there.  He went 0-2 with a pair of turnovers as the Rockets were out-scored 14-4 in overtime.  In his first season as a go-to guy, I expect Harden to have his share of games like this one.  That’s not a knock on Harden — it’s just reality.

***Mo Williams went off for 29 points on 9-13.  It wasn’t enough to earn the Jazz what would’ve been an impressive victory, but it did make Williams a 22-point scorer through week one.

***It’s more than a little surprising to me that Alec Burks has played a total of 2 minutes and 26 seconds this season.  He picked up his second DNPCD against the Spurs.

***Paul Millsap, who shot 7 of 31 from downtown a year ago, drilled two triples against the Spurs.  That make him 3-3 on the season, and it also means he’s averaging over a three, a block, and a steal per game.  Quite the versatile player he has become, and at both ends of the floor.

***I hate this.  If you watch Stephen Curry closely and pause the video the moment his feet stop moving, Chris Paul has already left the floor.  What is Paul to do other than run him over and score the basket?  That play was Chris Paul making an excellent basketball play and Stephen Curry exploiting a rule.

***Despite the bullsh!t, the Clippers only have themselves to blame.  Who gets out-rebounded 48-33 by the Golden State Warriors?  Keep in mind that Andrew Bogut sat this game out, so this was the same ol’ Warrior team that’s finished 30th in total rebounds in two of the last three seasons.

***Kevin Durant extended some sort of equally random and historic streak that has to do with his consecutive games of 22/12/5, but make no mistake about it: this was not his finest hour.  Durant finished with 8 turnovers, shot 7-17, and got posterized by Jeff Teague.  He also had his crossover ripped by Anthony Morrow and gave up a one-on-one score to DeShawn Stevenson.  None of this would matter had OKC won the game, but they didn’t, and now they have a losing record.

***Kevin Martin scored 28 points on ELEVEN shots.  He also finished the game without an assist, but who passes the ball when they’re shooting 73%?

***In some way, Kyle Lowry (22 points, 7 rebounds, 5 assists, 3 steals) and Andrei Kirilenko (17 points, 6 rebounds, 3 assists, 1 steal, 3 blocks) were involved in just about every positive play made by their respective teams.  Lowry is off to a remarkable start to the season… he’s averaging 23/7/7, and through three games he’s yet to fall short of 20/5/5.  That’s pretty amazing.

***Brandon Roy looked absolutely, positively, downright awful in this game.  This isn’t something I’m happy to report, but it is what it is.  As he turned the ball over 5 times in 22 minutes, Roy consistently struggled to get to his spots.  He was unable to convert any of his four shot attempts and failed to come up with a single assist despite handling the ball pretty frequently.  Unfortunately, it’s going to be hard for Roy to make plays if he can’t move well enough to get where he needs to go.

***No, Alan Anderson’s 18 points do not represent a career high.  As a member of the Bobcats, he dropped 24 on the Bucks in 2007.  You really ought to take a look at the box score from that game.  Walter Hermann led all scorers with 30 points.

***The 1-3 Lakers beat the Pistons so badly they now have a positive average scoring margin of +0.2 on the season.  Having lost their first three games by a total of 28, the Lakers jumped on the back of Dwight Howard and crushed the Pistons by 29.  Howard out-scored Detroit’s starting lineup 28-27 despite taking 25 fewer shots.  Howard and Gasol (14 points) were simply much too big for Greg Monroe and Jason Maxiell, and Los Angeles exploited this advantage early and often.

***Detroit’s starting backcourt of Rodney Stuckey and Brandon Knight combined to shoot 1-14.  Although it was Knight who made the one shot, I thought his play was especially poor.  He tried to force it in the early going, and that resulted in an 0-5 first quarter.  Throw in a couple of turnovers and it was one of the ugliest stints I’ve seen in quite some time.

***The Pistons, who had trailed by more than 30, cut the Laker lead to 24 in the first three minutes of the fourth quarter.  Why is this relevant, you ask?  Well, because Mike Brown decided the run was significant enough to summon Kobe Bryant, Dwight Howard, and Pau Gasol to the scorers table.  The three of them were still in this game, which hadn’t really been in question since the first quarter, with under five minutes to go.  Meanwhile, Lawrence Frank stuck with his garbage time lineup of Will Bynum, Kim English, Kyle Singler, Jonas Jerebko, and Andre Drummond.