Posted on November 3, 2012 by Stephen Coston 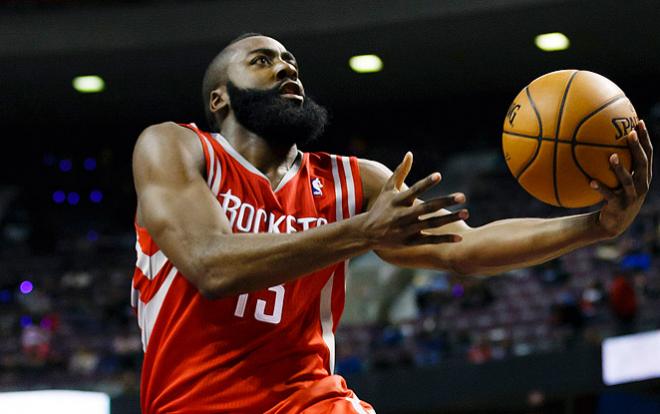 Would you believe me if I told you James Harden’s encore was even more spectacular than his debut? What if I told you he dropped 45 last night, and that only Michael Jordan and Wilt Chamberlain have scored more points in a team’s first two games of any NBA season? It’s all true, folks. Remember, I have no reason to stretch the truth. I, like many, have been critical of Houston’s decision to build around Harden. Right now, he’s making me out to be a complete and utter maroon… and I don’t even care. Not even a little bit. In fact, I’m extremely excited about potentially being wronger than I’ve ever been before. Having watched Harden drop 82 points in his first two games as a featured scorer, I’m like a kid on Christmas Eve as I wait for Houston to head home and take on the Blazers at 8 o’clock Eastern on Saturday.

What I’ve come to enjoy most about James Harden is probably the speed at which he attacks the defense. He doesn’t have lightning quickness, yet he gets to the basket with ease. His style is more methodical… similar to a Paul Pierce or a Joe Johnson. Harden is absolutely incredible at getting the most out of his final two steps — he frequently takes them in different directions as he navigates winding lanes to the bucket.

Harden has been so remarkable that he’s basically overshadowed everything else that’s going on not only in Houston, but around the entire league. So, I want to note that Jeremy Lin and Marcus Morris were key in lifting the Rockets over the Hawks last night. Lin nearly finished with a triple-double as he scored 21 points, grabbed 10 rebounds, and dished 7 assists. Morris‘s 17 came on 8-14 off the bench.

Josh Smith’s first game as “the man” in Atlanta went… well, exactly how I figured it would, actually. Smith certainly wasn’t shy against the Rockets — he fired off 21 attempts, 7 of which came from 20 feet and out. Despite a surprising swish on his first look from the outside, Smith finished just 2-7 (28.5%) on jump shots and launched his first air ball in the second quarter. Smith’s struggles from the perimeter reflected those of his Hawks, who missed 29 of 40 shots from outside the paint.

Overall, the Hawks looked fantastic in the open court and a little rough in the half court. Thirty-three of ATL’s 102 were scored on the break, which is pretty damn impressive, but their lack of size (completely demolished 23-7 in the offensive rebounding column), polish, and Joe Johnson was very evident when they were unable to get out and run.

Atlanta also produced the bonehead play of the day: down three with a minute or so to go, Jeff Teague passed up a wide-open, in-rhythm shot from the top of the key. To compound his mistake, he swung the ball to Josh Smith on the wing. Needless to say, Smith didn’t think twice about shooting. Even more needless to say, he missed. Badly.

Offensively speaking, the Minnesota Timberwolves (when healthy) feature one of the most imposing frontcourts in the league. However, Kevin Love and Nikola Pekovic aren’t so scary at the defensive end of the floor, where they average a combined 1.5 blocks per game. For this reason, Greg Stiemsma’s 16-minute performance in Minnesota’s 92-80 victory over DeMarcus Cousins and the Kings had to feel encouraging. Stiemsma came in off the bench and made his presence felt around the basket as he blocked 4 shots and effected many others. In addition to his effective defense of the rim, Stiemsma drew Cousins’ third foul on a charge and pulled down 7 rebounds.

Mike Dunlap’s Charlotte Bobcats are 1-0, meaning they’ve snapped the franchise’s 23-game losing streak. Kemba Walker scored 30 points to lead the Cats past the Pacers, but it was the defense of Dunlap’s group that really made the difference. It was clear from the early going that the Bobcats would aim to force the Pacers to live and die by the outside shot. The played a lot of zone and sent swarming double teams at post players and penetrators, which helped force 17 Indiana turnovers. More importantly, it resulted in the Pacers firing 26 threes, of which they made only 7. George Hill, Gerald Green, and DJ Augustin went a combined 3-17. Augustin, a former Bobcat, had a wide-open look to win it at the buzzer but missed well short.

As the Lakers have fallen to 0-3, a trend has emerged: they turn the ball over and fail to stop opponents from scoring in transition.  Despite a 40-point effort from Kobe Bryant, the Lakers fell victim to the Clippers on Friday as they watched Chris Paul, Eric Bledsoe, and Jamal Crawford turn 20 turnovers into 25 points.  The Lakers are now giving up an average of 17.7 points on the fast break, which is atrocious.  The Kings finished 30th in the category last season and they only allowed 17.1.  While I refuse to jump to any conclusions so early in the season, this is one trend that I believe is worrisome.  Aside from Dwight Howard, the Lakers aren’t exactly athletic, and it’s quite clear that they have trouble keeping up when opposing teams are able to run.  Expect opponents to continue aiming to exploit LA’s lack of speed.

The Knicks’ trouncing of the Heat allowed Mike Woodson to give the New York City crowd precisely what they wanted: Rasheed Wallace.  When Woodson asked Rasheed if he’d like to play some garbage time in front of his new legion of fans, Wallace was happy to check into the game.  He connected on one of two shots in three minutes and later told reporters that he “accepts [his] Brian Scalabrine role.”

Greivis Vasquez had a shot to beat the Spurs on Wednesday, but his three-pointer fell short.  Much to my surprise (who the hell thought the Hornets would be this competitive?), he was given the chance to redeem himself against Utah.  This time, he did not disappoint.

Unfortunately, the Hornets’ first W of the season was something of a bittersweet victory.  Anthony Davis left with a suspected head injury, which turned out to be a minor concussion.  He will not play tonight and is listed as day-to-day.

Box Score Observations: Shannon Brown scored 10 of his 14 points consecutively in the fourth quarter to help the Suns fend off the Pistons.  Marcin Gortat had 16 points and 16 rebounds.  Jason Maxiell scored 16 for Detroit.  Big Baby Davis put up 29 and 10 as Orlando kicked the crap out of Denver.  The Nuggets, who went 7-26 from three, are yet to shoot 40% this season.  Nate Robinson stole the show from Kyrie Irving in Chicago’s 115-86 win over Cleveland.  Brandon Jennings’ 21 points were big in Milwaukee’s first opening night victory since ’06/07.  The Bucks beat the 0-2 Celtics by 11, though they led by more for most of the game.  Mike Conley scored 21 points on just 9 shots and stole the ball 5 times to help Memphis beat Golden State by 10.  Damian Lillard’s impressive play continued against Oklahoma City… he finished with 21 and 7 on 9-19.  Russell Westbrook did give him a healthy 32, though.  Kevin Durant put up 23 and 17.